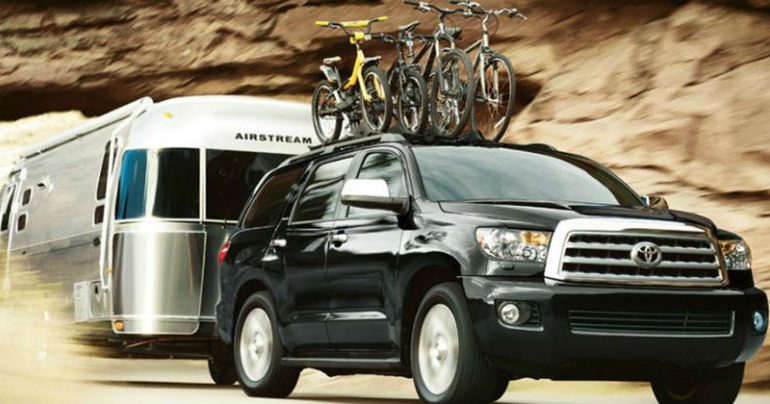 The Toyota Sequoia is one of Toyota's larger SUVs and it has a pretty impressive towing capacity as well. I was doing some research online and found that some of the stated capacities were either incorrect or there was such a large range that it made it hard to determine the proper tow rating.

I broke down all of the Sequoia's capacity specs based on the year, engine configuration and other metrics and tried to make it as easy as possible to read, sort through and understand. Here goes...

Overview of the Data For the Toyota Sequoia:

Engine Choices: There were three main engines used over the lifetime of the Toyota Sequoia and these were the 5.7L engine, the 4.7L engine and the 4.6L engine.

The 5.7L engine had some of the highest towing capacities but the 4.6L and 4.7L models also had respectable figures, in some cases only a couple of hundred pounds less of overall capacity than the 5.7L engine.

Configurations: There were two main configurations and these were a choice between 2WD and 4WD models. In general, the 2WD models had a higher overall capacity than the 4WD models.

There was not really a huge difference in overall capacity between the 2WD and 4WD models, usually in the ballpark of around 200-300 lbs. for the most part for most years.

Towing Capacity: The towing capacity for all of the models years for the Toyota Sequoia had a pretty significant range going from 6,400 lbs. all the way up to 10,000 lbs.

The metrics that impacted the capacity numbers the most was the year that the vehicle was made, the engine equipped and whether you had (or can have) a tow package installed on your vehicle.

The 2021 models had all of the same trailer weight specs as the 2020 and 2019 charts but it contained the GCWR specs, instead of the vehicle capacity weights.

Note that the ratings in the chart (7,000-7,400 pounds) were for braked trailers, or trailers that have their own braking system, separate from the vehicle's braking system. If your trailer did not have it's own brake system, then the rating took a huge hit, only having a 1,000 pound rating max. The Toyota Sequoia's maximum towing capacity included the cargo weight as part of the overall capacity and is more of a GCWR but a good metric nonetheless.

The model code number is the reference for the exact capacity, but the range only changed by 100 lbs. or so, so not a huge difference that would significantly impact tow capacities. That means that the maximum capacity for the Sequoia's made in 2011 and 2012 ranged from 6,600 lbs. to 7,400 lbs. which is a pretty significant difference, so you will want to look at the chart to determine your exact capacity.

The charts for the 2011 and 2012 model years were identical, so only one tow chart is shown. I would recommend referring to the chart if you are looking up your tow capacity for a 2008 or 2009 model because there was a huge range, even for a specific engine with a specified configuration. The chart below shows that the minimum difference is 1,600 lbs alone! For models made from 2004-2007, there was no engine configurations specified and the towing capacity ratings were much more simple for these years too. The specs for the 2001-2003 models were identical to the 2004-2007 models but I wanted to split it up since the area where they were specified looked different. It is important to note that some models with specific trim options will have slightly different towing capacities, based on which trim/model you have.

The image below shows an example of this with a 2012 model and states the different towing capacities for the SR5, Limited and Platinum models.

Where Do I Find The Model Code Number (2008-Present Models)?

The model code number is the main identifying factor for 2008-present models and to get your specific towing capacity for the Toyota Sequoia, even though there is not a huge difference from the other main factors of maximum capacity (engine configuration, 2WD vs 4WD, etc.).

The model code number is located along the driver's side door jamb, by the door latch hook, as shown in the image below. The label that the model number will be printed on will be labeled the "Certification Label". Below is an example of what a Certification Label looks like for a Sequoia and the location of the model code is circled in red, to give you a better idea of where it is located on the label. There is also other good information on this label that can give you other towing related metrics like GVWR, Axle Ratings, etc. Below is various links to all of the Toyota Sequoia's owners manuals that I used when conducting my research. These are all from Toyota's website and I wanted to include them for an easy to find reference library for anyone who wants to look up the specs for themselves... 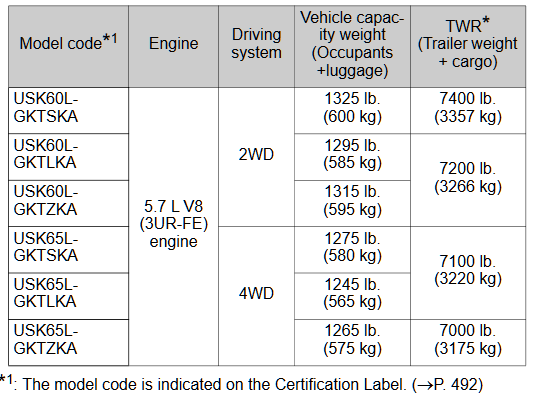 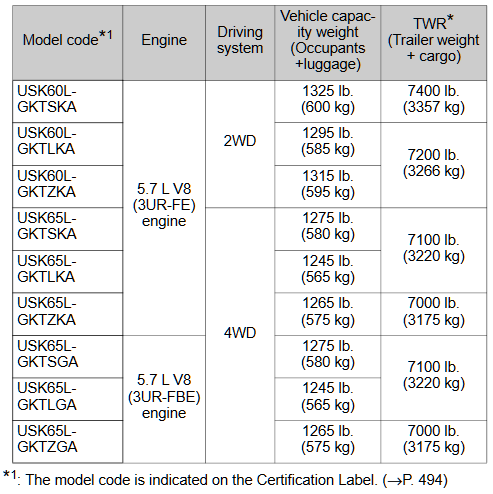 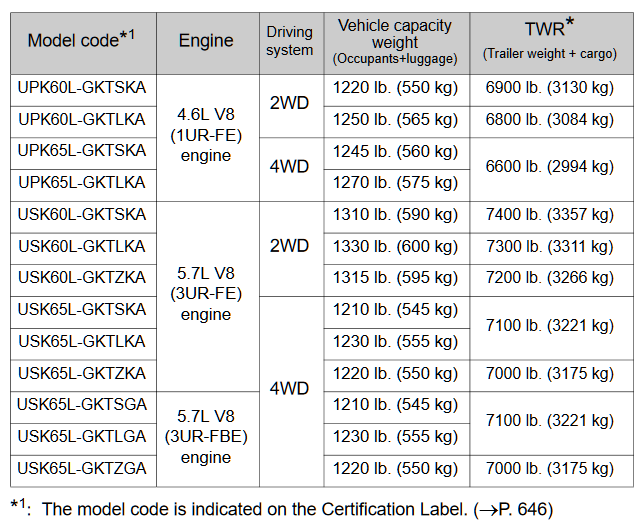 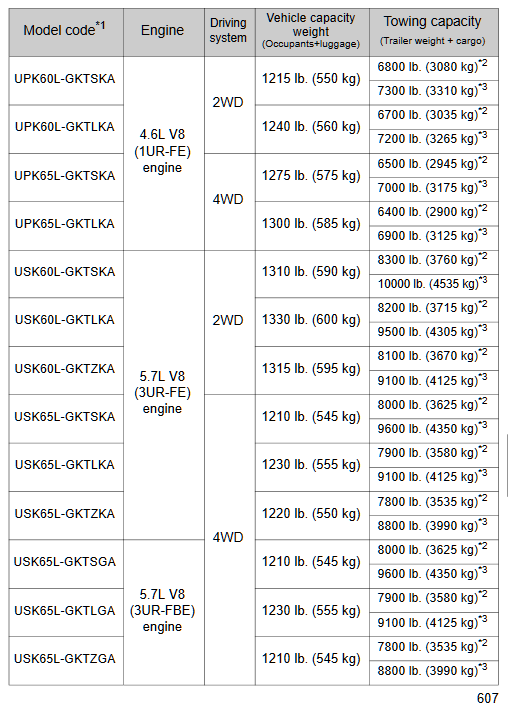 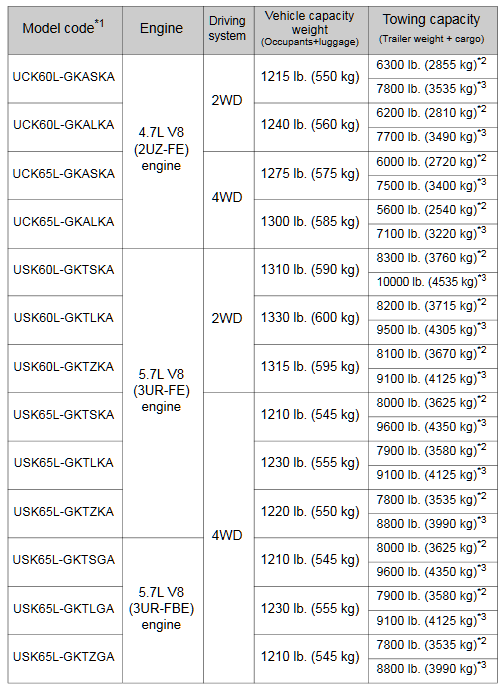 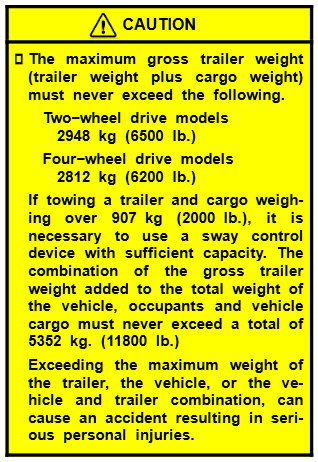