The Toyota Highlander is another one of those big SUVs that are very popular and they're perfect for people with larger families, but I wanted to know if they had any sort of towing capacity whatsoever.

I started doing a bit of research and found out a lot about the Highlanders and was quite surprised that they could actually tow a decent amount of weight, depending on the model year and in some cases what equipment you had installed on your vehicle.

Overview of the Data For the Highlander:

Engine Choices: There was only one or two engine choices over the years for the Highlanders and to be honest, it didn't really make a huge difference in the capacity numbers, making for about a 500 lb difference between the two engine choices, in general, if you had a choice.

Some model years only had one engine choice, so the capacity numbers were static and did not vary at all.

From what I saw, you could expect to have a 3,000 pound increase in overall capacity if you had one of these packages installed.

Towing Capacity: The towing capacity for these SUVs did differ quite a bit for certain model years, ranging from 1500 pounds on the low end and going all the way up to 5000 lbs!

In general though, I would say that most of the capacity numbers ranged in the 3,000 to 3,500 pound range for most early model years and for later model years the capacity went up to 5,000 lb maximum capacity.

Some have the model years for the Toyota Highlander shared the same trailer weight rating specs, so I took a screenshot of one chart and used that for multiple model years, in some cases.

Be sure to read your owner's manual for all of the towing related information on your specific model year Highlander to be sure you understand the manufacturer's recommendations regarding all things are related.

2021 and 2020 models  had a towing capacity range of between 1,000 - 5,000 lbs, with the smaller one thousand pound rating being for trailers that did not have a braking system.

This definitely made the chart very easy to read and takes a lot of the guesswork out of the whole ordeal. 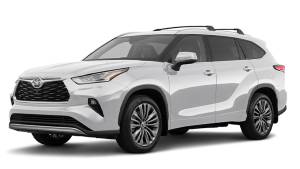 There were no variations that I saw when it came to having a tow package installed either, just a simple chart that you can see in the image below with two main capacity numbers listed. The 2021 and 2020 charts were identical, so I only posted the one image below, but I compare the information and they are identical. 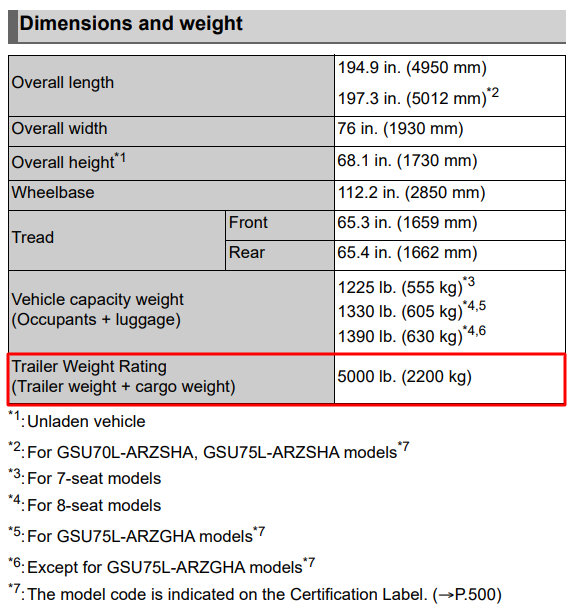 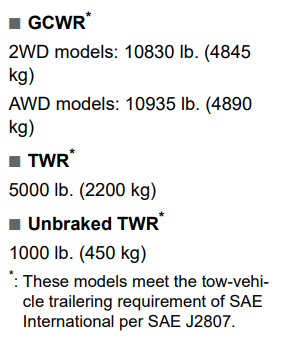 The lower 1,500 pound rating was only associated with one model code, that you can see in the chart below, and all the other model codes we're able to attain that higher 5,000 lb rating. 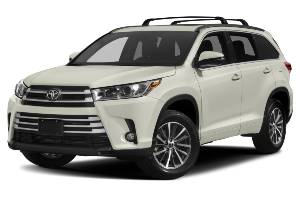 The model code for the lower capacity rating was due to the engine option that was available for the 2019 - 2017 models, which was a four-cylinder engine instead of a 6-cylinder engine. 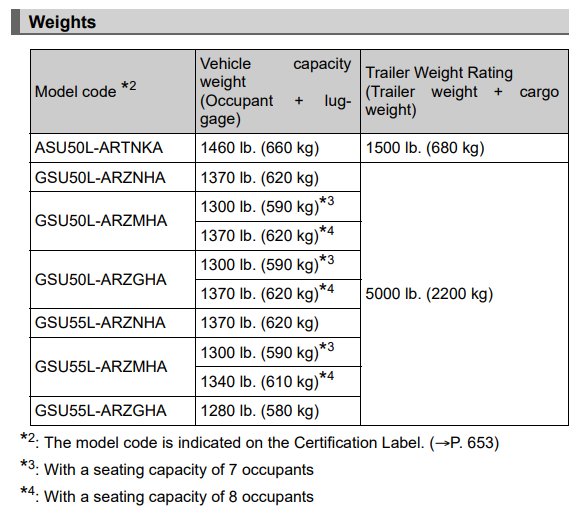 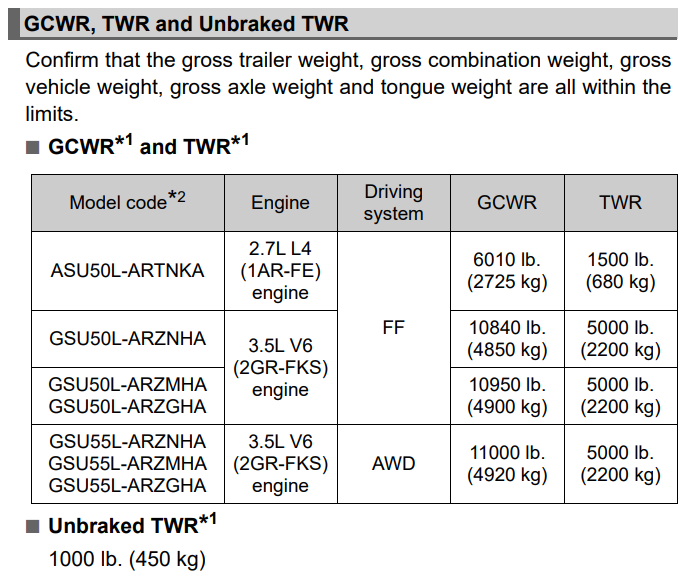 The same two engines were available for these model years, which was the 4-cylinder and 6-cylinder engines.

The chart below shows a 2,000 pound and 5,000 lb capacity range for the models equipped with the six-cylinder engine, depending on whether you had a tow package installed on your vehicle. 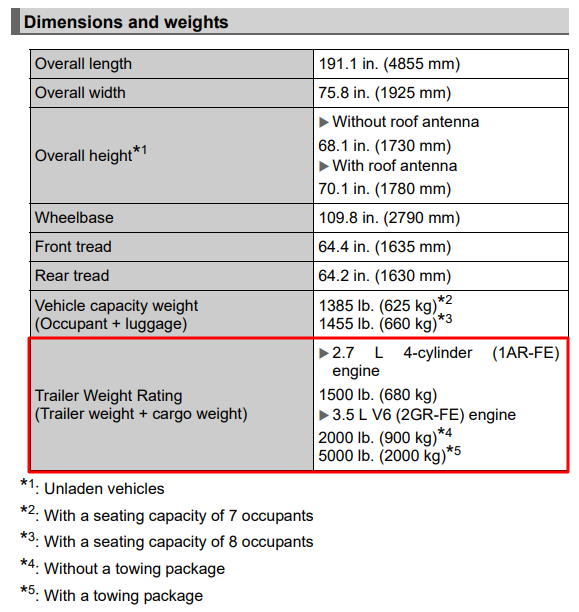 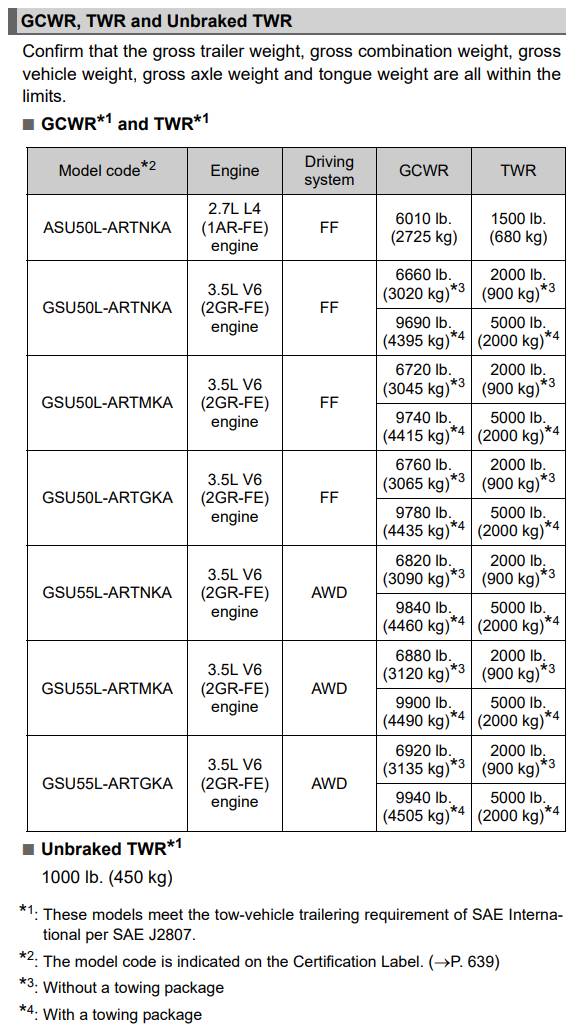 The 2013 - 2009 models had the exact same towing capacity range of between 1,000 and 5,000 lbs, like we saw with later model years and even share the two engine options but had different ratings for each engine depending on your factory installed equipment. 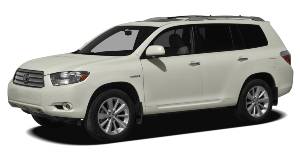 If we look at the charts I found for the 2013 - 2009 models, we can see that each of the two engine options had two different weight capacity ratings, that were entirely dependent upon having a tow package installed.

For models equipped with a four-cylinder engine, the maximum trailer weight capacity was listed between 1,500 lbs and 3,500 lbs, while models with the six-cylinder engine had a range of between 2,000 lbs to 5,000 lbs (max). 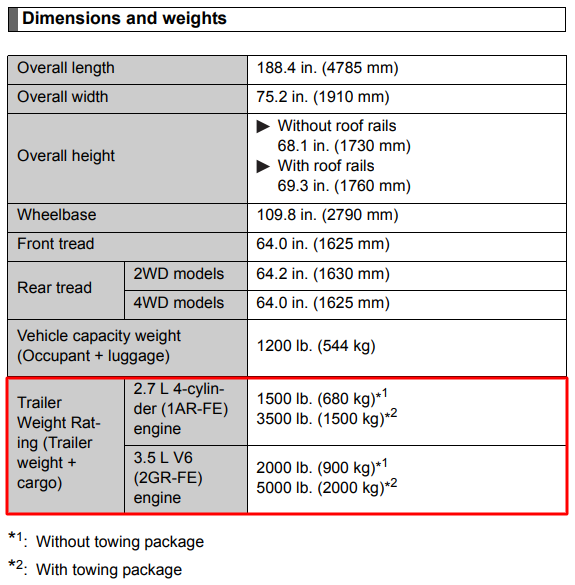 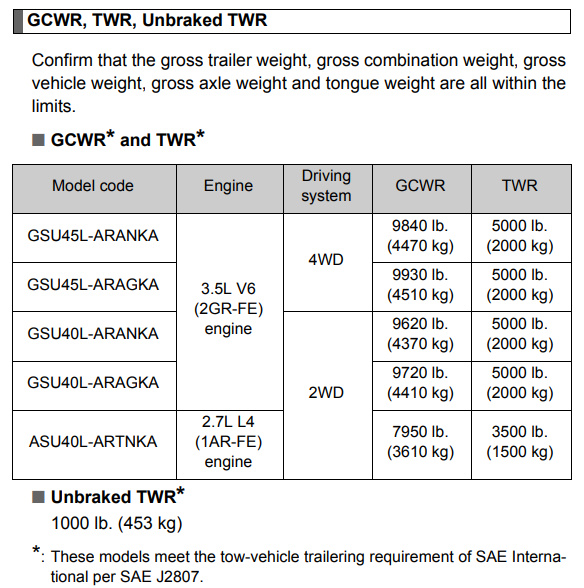 The 2008 models we're in a class all their own oh, when we look at the maximum trailer weight rating specs and had towing capacity range of between 1,000-5,000 lbs, according to the manual.

The two different capacity ratings we're based on whether you had a tow package installed on your vehicle, like we have seen in other later model years and still accounts for that 3,000 pound gap, which is huge! 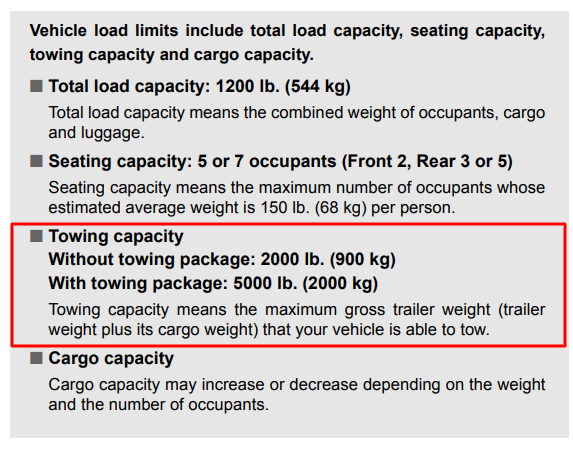 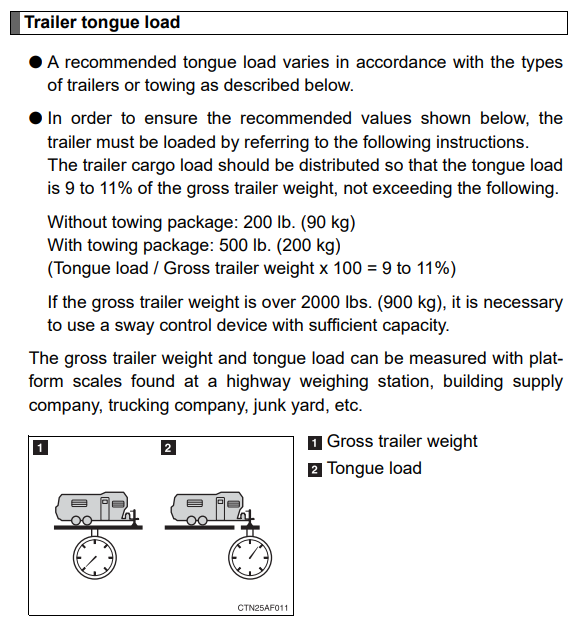 There were two different engine options, again a 4-cylinder option and a 6 cylinder option but not much difference when comparing the overall capacity numbers between the two engines themselves. 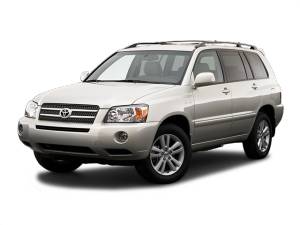 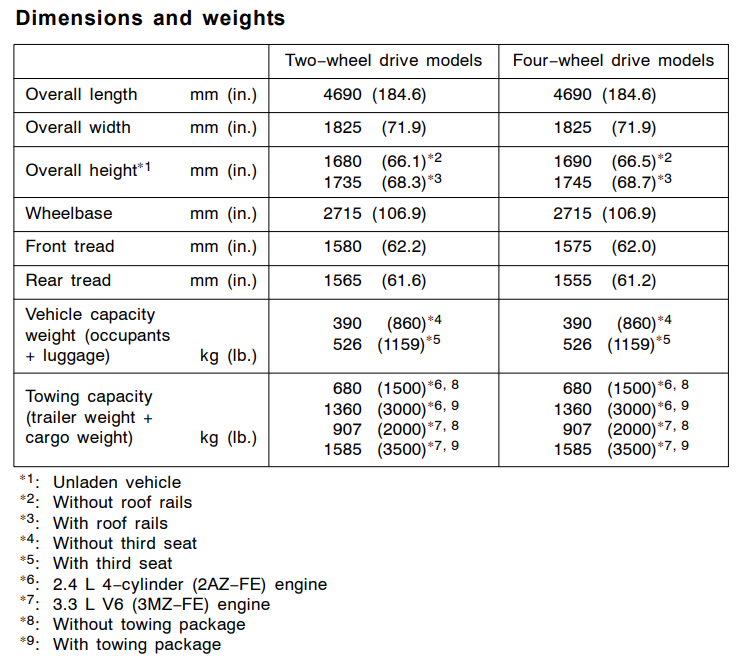 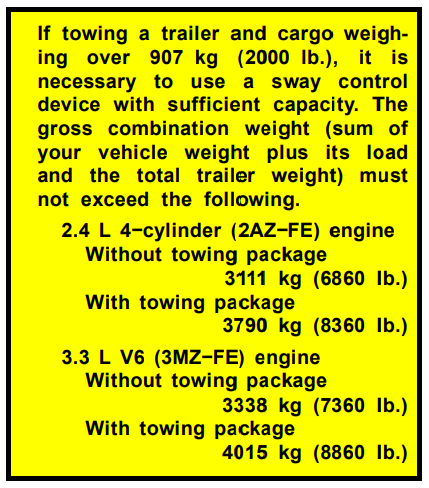 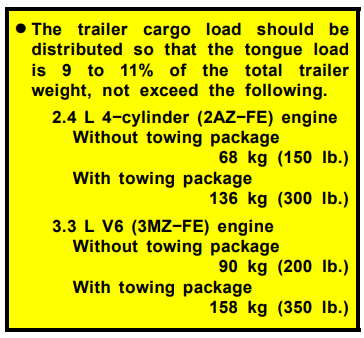 The 2004 models had a very simple towing chart and a towing capacity range of between 3,000 - 3,500 lbs. This was completely dependent upon which engine you had equipped, as there were two different options available.

These are represented in the chart below as the 2AZ-FE and 3MZ-FE engines.

There was nothing specified about having a tow package installed, so I assume these numbers really only applied to the specific engine you had equipped in your Highlander. 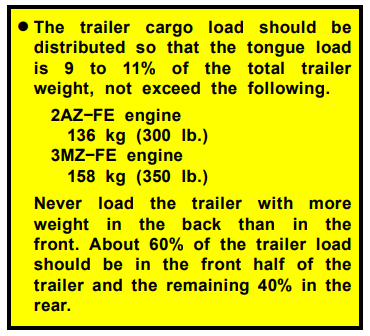 On the chart I have listed below, you can see below the towing capacity numbers there are gross combined weight ratings, which would have been nice to have for all the later model years, in order to get a more complete calculation for your overall weight. 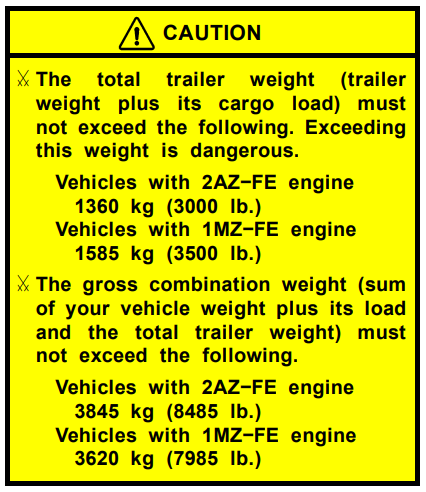 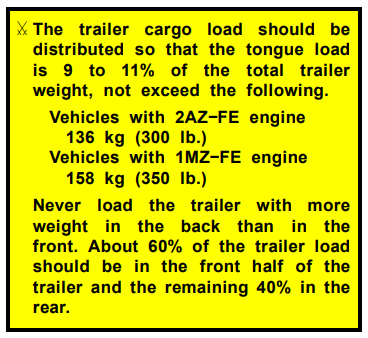 I did want to mention that the minimum and maximum specs for the same throughout all of these model years with slight differences in the GCWR specs but nothing too drastic. If you do want to know your GCWR for your specific model year, then I recommend you look in the Hybrid owners manual. 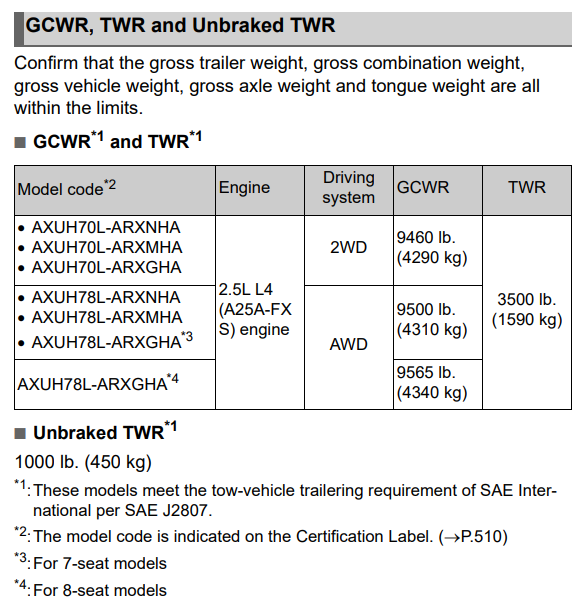 The 2007 and 2006 Hybrid models had a towing capacity range of between 1,000 lbs - 3,500 lbs, like we saw with all the later model years with the exception of an added variant of 2,000 lbs., which was reserved for models without a towing package equipped. 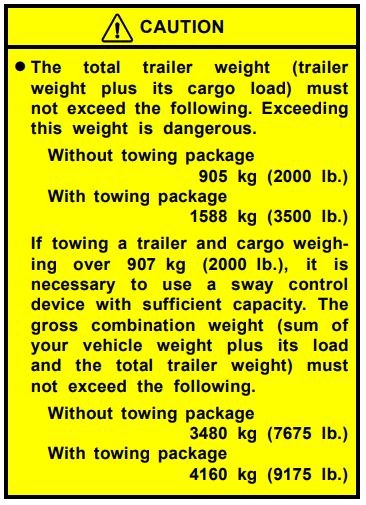 What Engine Do I Have Equipped?

From 2001 to 2016, there were engines that were specified using special engine codes that I think a lot of people might find a little more confusing than just listening what the actual engine's displacement was.

I went ahead and gathered the engine codes and wrote down their corresponding engine displacement figures to make it a little easier to cross-reference what engine you actually had in your Highlander.

There we're not any GVWR or GAWR specifications listed in any of the owner's manuals that I looked at but they did mention where you could find these figures, which should be helpful in calculating more complex loads.

Both the GVWR and GAWR numbers are listed inside the driver's door on the safety certification label, along with other information about the vehicle. Remember that both of these figures refer to the maximum weight of the vehicle and do not take into account any sort of trailer weight.

Do I Need My Model Code?

From 2019 to 2017, the charts list multiple model codes that you have to reference in order to get an accurate maximum trailer weight rating specification, and you will need to know where to find this in order to plug in the numbers correctly.

The model codes can be found if you open the driver side door and look along the door jamb area, in which you will find a label that has the model code listed. Write down your model code and compare it to the model codes in the chart to see what your maximum trailer weight rating is. 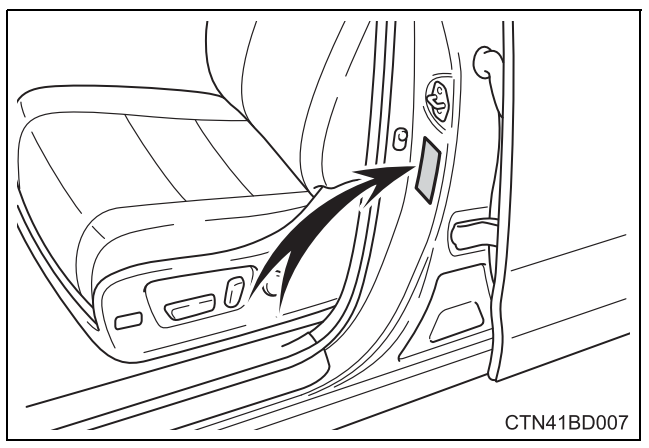 A lot of the Highlander model year specified two or more different maximum trailer weight rating specifications depending on whether you had a tow package installed on your vehicle. This was not always easy to find in the owner's manual though, so I did a little research and was able to find some information.

It is not always clear what is included in a tow package, but I was looking through some of the brochures for the different model year Highlanders and was able to find some information. The image below is from a 2018 brochure and shows what was available for the different sub models and whether those features were standard, optional or unavailable accessories.

I don't know how to tell if you have these certain accessories equipped in your vehicle, I was only able to find what came without specific year and the accessories that were offered so you will have to do a little more research yourself or take your vehicle into a dealership to see if they can confirm whether you have one of these packages installed or not.

All the information I gathered for this article came directly from the owner's manuals for the Highlanders, directly from Toyota's website which you can check out for yourself.

All you have to do is follow the link above and then enter the Highlander or Highlander Hybrid from the dropdown menu, select your model year, and it will bring up the PDF for the owner's manual and other resources, in most cases and just click the link for the PDF to view the manual.