The Nissan Armada is a larger SUV that has a substantial towing capacity tied to it but trying to find some of the information was hard and vague, for the most part, so I wanted to clarify the information for myself and figured it might come in handy for others as well.

The Armada was made from 2004-present and did have pretty consistent weight ratings, with a few changes over the years. I gathered the data for these SUVs and tried to lay it all out in an easy-to-read format. Hope it helps!

Overview of the Data For the Armada:

Engine Choices: There were no specific engines that were specified that directly affect the Armada's capacity numbers. In the data below, you will not find any information regarding the engine configurations because it was not a determining factor when it came to the trailer weight numbers.

Configurations: There were two different models offered over the years, which was offered as a 2WD or 4WD model. The maximum weight capacity didn't seem to be affected by either type of configuration and the specs were nearly identical for 2WD and 4WD models, except for model's made in 2015.

There was an 800 lb. maximum capacity difference for 2WD vs 4WD models made in 2015, according to Nissan's the chart.

Towing Capacity: The average towing capacity for the Nissan Armadas throughout the years (2004-2019) ranged from 6,500 lbs.-9,100 lbs. There were really two different specs listed for these vehicles, a lower range and a higher range and no really a "range" type of figure.

Nissan requires the use of a weight distributing hitch for trailers weighing over 5,000 lbs. It would be wise to have a braking system too for heavier trailers like that too but doesn't seem to be a requirement.

All of the models had the same specs that were made from 2021-2017, as you can see from the graph below. Note, that there was not a chart/manual for the 2016 year of the Nissan Armada available. I assume this was because of a manufacturing change of some sort. There were actually two different figures and not so much of a range, consisting of a lower capacity of 6,500 lbs. for models without a tow package installed and around 9,000 lbs. for models equipped with one. For the Armada, the maximum tongue weight specifications we're locked in at the industry-standard of between 10% and 15% of the total trailer weight, which is normal to see when it comes to tongue weight specs. Here is the image I found in the manual that illustrates this point. 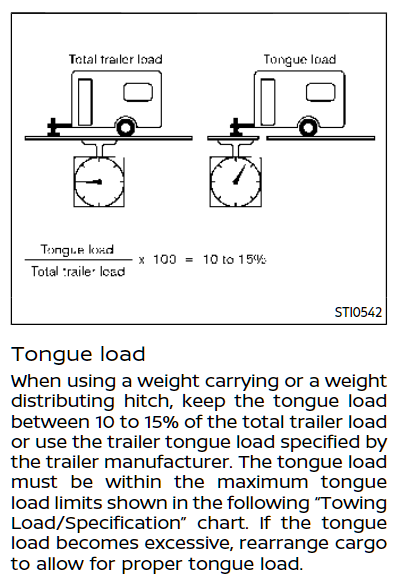 How Do I Know If I Have A Tow Package Installed?

There was not a specific answer that I could find to this that would lead me to believe that there was a definite "yes or no" answer. There were a lot of speculation online and even people stating that the Nissan Dealerships could not help answer the question either.

I do know that the manual did not state that there were specific upgrades made, like an upgraded radiator, alternator, towing hitch, etc. that you would find on other manufacturer's tow packages.

It seems all I could find is that if you did have a factory installed Nissan tow package on your vehicle, then it only consisted of a receiver hitch (frame mounted) and a 7 pin connector.

Here's what I found in one of the Armada's owner's manuals from 2013 (important parts are highlighted): A Note On Trailer Brakes...

Since these Nissan SUVs at such high trailer weight capacity limits, I was sure there would be something in the owner's manual that talks about trailer brakes and sure enough I was able to find a little snippet that I took a screenshot of and posted below.

For this particular vehicle, Nissan recommends that your trailer have its own braking system if the trailer weight is going to be over 3,500 pounds.

If you are buying a new Armada, then it is important if you know about the specified break in period of the vehicle in order to prevent any premature damage from happening, especially when it comes to pulling a trailer. I was able to find this little note in the 2020 manual (image below) that does not recommend pulling a trailer find your vehicle for the first 500 miles.

When you are finally past that initial 500 miles on your new vehicle, you can then go ahead and pull a trailer, but there are separate recommendations for the first 500 "towing" miles. 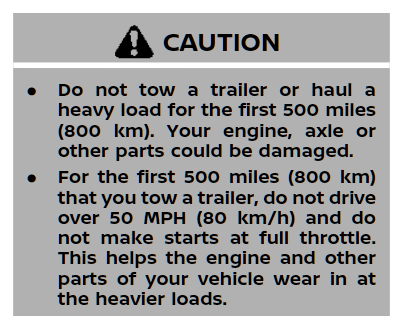 Below is a list of Nissan's Owner's manuals for the Armada, which is where I gathered my information for the tow specs in this article. They can be extremely helpful when looking up anything related to your vehicle, as they have other additional information that may come in handy for some people. 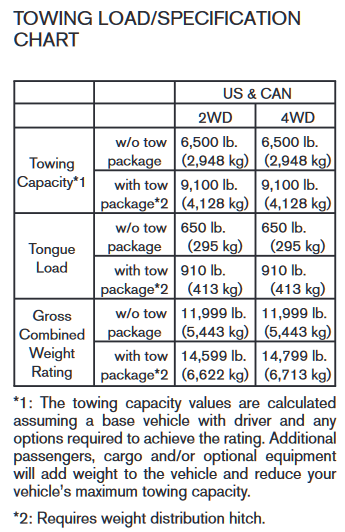