I wanted to do a tow capacity resource page for the Nissan Titans but I noticed that the charts were pretty intricate so I decided to break it up into model years. Obviously, this post is going to be dedicated to 2020 - 2015 model years, in order to make a cleaner more visually pleasing page that is easier to understand.

I tried to make everything easier to read and break everything up into little sections, including the charts I found in the owner's manuals. Hopefully this article helps somebody out there or at least makes it a little bit easier on them to find out their specific specs.

Overview of the Data For the Nissan Titan:

Engine Choices: The 2020 - 2015 Nissan Titan's did not have specific engines that were listed that directly affected the capacity numbers. The only choices you had that showed up in the charts were either a gasoline or diesel engine.

In general, the diesel engines had a little bit more pulling power, equating to roughly 500 to 1,000 lb difference depending on various factors.

Variations In The Charts: Some of the tables I found for these trucks were a little bit difficult to read and you had to look closely at what chart was for what model and a number of other things, in some cases.

In general, the charts were grouped by non-XD models and XD models. When you look at the charts for the XD models specifically, you will notice that they are subdivided by gasoline vs diesel engines, 2WD vs 4WD, cab style (single, crew and king) and receiver hitch vs gooseneck hitch, which all had varying capacity numbers.

On some of the model years used, there were several different charts that I found in the owner's manuals and you should click on the image to get a full size image and to be sure that you are viewing the entire chart.

Some of the charts were so large that they will not fit in the preview window of the image you see and you will have to click on it to open the entire chart.

I've listed the maximum trailer weight ratings in this article for 2020-2015 Titan's, but you should  look at the manuals yourselves in order to have all of the information required.

Specific things like weight distribution hitches are required for trailers over certain weights, when to use sway control bars and other helpful information is in these manuals.

The 2020 models showed two different charts in the owner's manuals that display the XD models capabilities and the non-XD models specs. It is important to note that on the XD models chart, the top chart's numbers are with a receiver hitch, (class 4 hitch to be specific) and the lower chart is for gooseneck hitch ratings.

On the non XD models, there was no gooseneck hitch rating but instead both charts were specified for standard receiver hitch hauling and the two variations in charts were simply just for crew cab models and then king cab models. The tables were a little bit confusing for the 2019 models but were arranged as: non-XD models and XD models with diesel engines and gasoline engines and then with conventional receiver hitch specs and gooseneck specs. The 2018 models had similar ratings to the 2019 model years, but there were some slight differences.

The towing capacity range for the 2018 models started at 9,230 lbs. and went all the way up to 12,760 lbs. for the single cab XD model, which had the highest rating, if you had the two-wheel drive configuration. Again, the non-XD models for 2018 had the lower capacity range that was between 9,230 pounds and went all the way up to 9,740 pounds, the highest rating belonging to the two wheel drive single cab model.

If you had a 2018 XD model, then the (much higher) capacity specs ranged from 10,990 pounds and went up to a much higher 12,760 pounds, depending on the engine you had equipped, whether it was 2 wheel drive or 4 wheel drive and what style of cab you had. The 2017 models had several different tow charts like we saw in 2018 and 2019 but not as many, so it is a little bit easier to navigate through them because of this. The 2016 models had a much easier chart layout to sift through because there were no XD models listed and the two charts were broken up into diesel engine specs and gasoline engine specs.

The 2016 Titan's had a towing capacity that ranged from 8,870 pounds on the lower end of the spectrum and went all the way up to 12,313 pounds on the higher end.

Again, the diesel engine models did have more of an overall total capacity if you compared the same type of vehicle, will the same size cab and same drivetrain configuration. In general, they had roughly around a thousand pounds more capacity over the gasoline engines. Models made in 2015 had a little bit different chart set up in the fact that there were no engines that were specified that affected the overall capacities but instead they were grouped by vehicles with and without tow packages installed and then sorted by short and long wheelbase models. Nissan Titans made in 2015 had a towing capacity that started at 7,000 pounds and went much higher than that, all the way up to 9,500 pounds.

It is important to note that models that had the towing package installed had capacity numbers that were 2,000 pounds or higher than models that did not have the one installed, making quite a big difference in the overall figures.

I used the owner's manuals I found online for all of the research I gathered and compiled in this article for 2020-2015 Titan's towing capacities, in order to get the most accurate information I could.

I left links below to the owner's manuals I used in case anybody out there wants to do their own research themselves or check out a little more information on their trucks. Hope it helps! 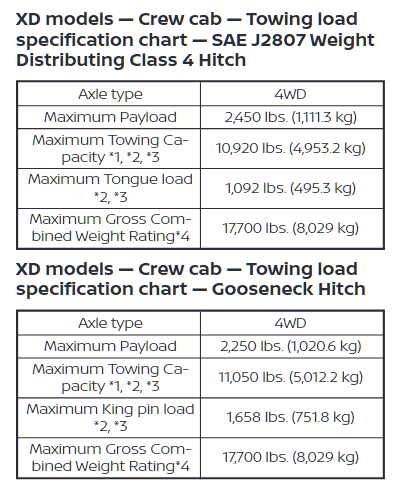 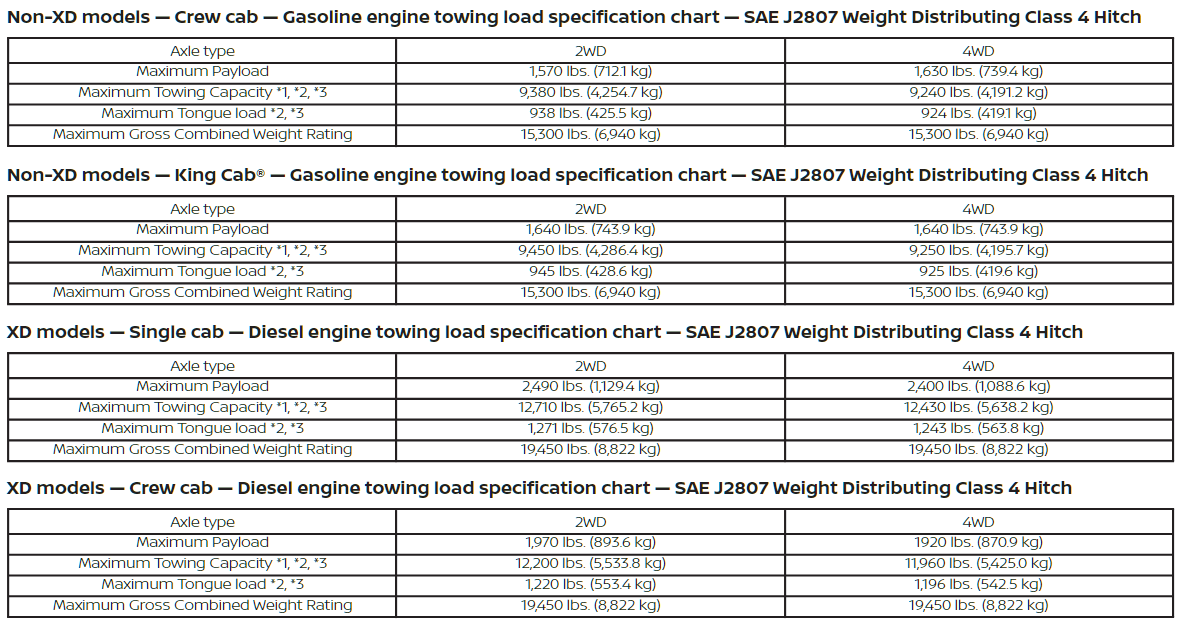 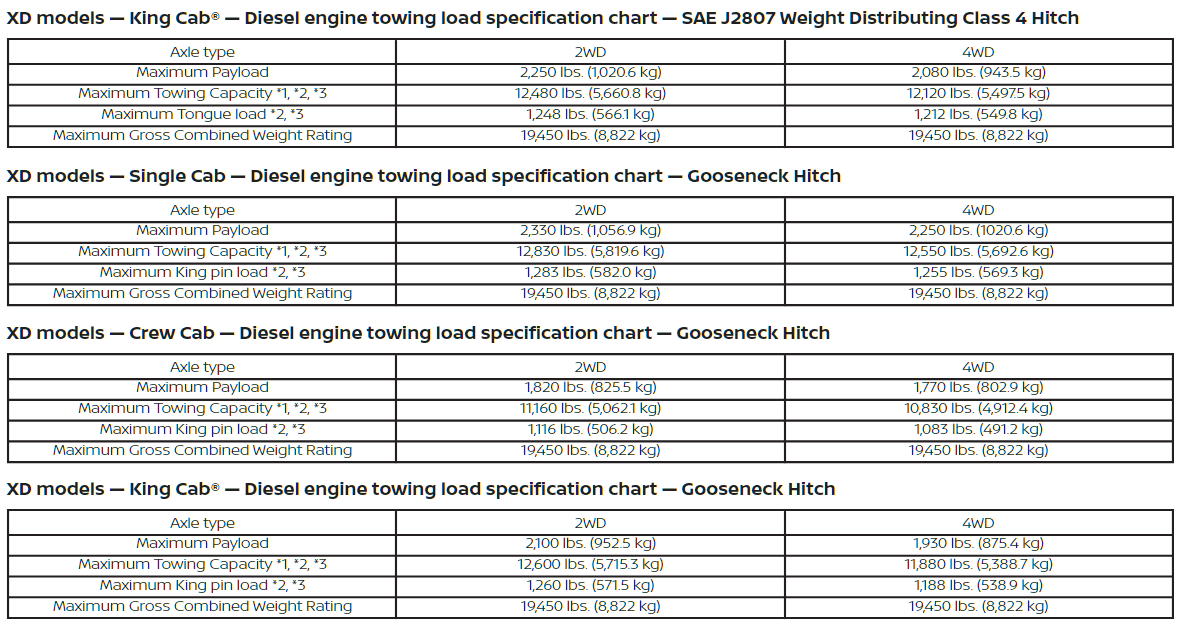 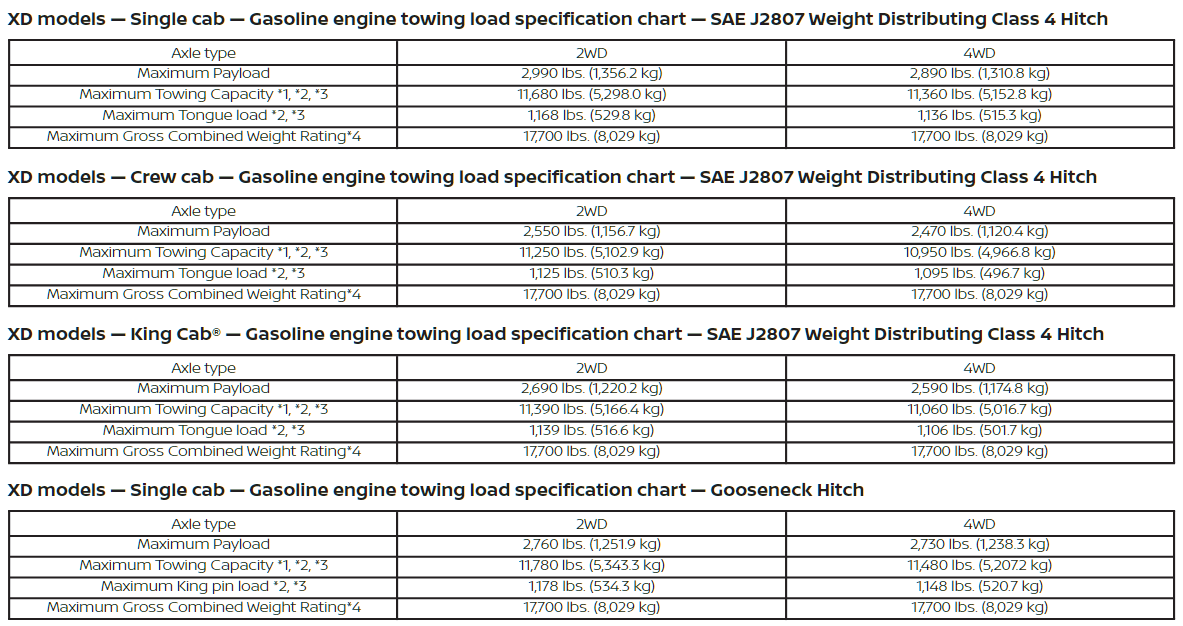 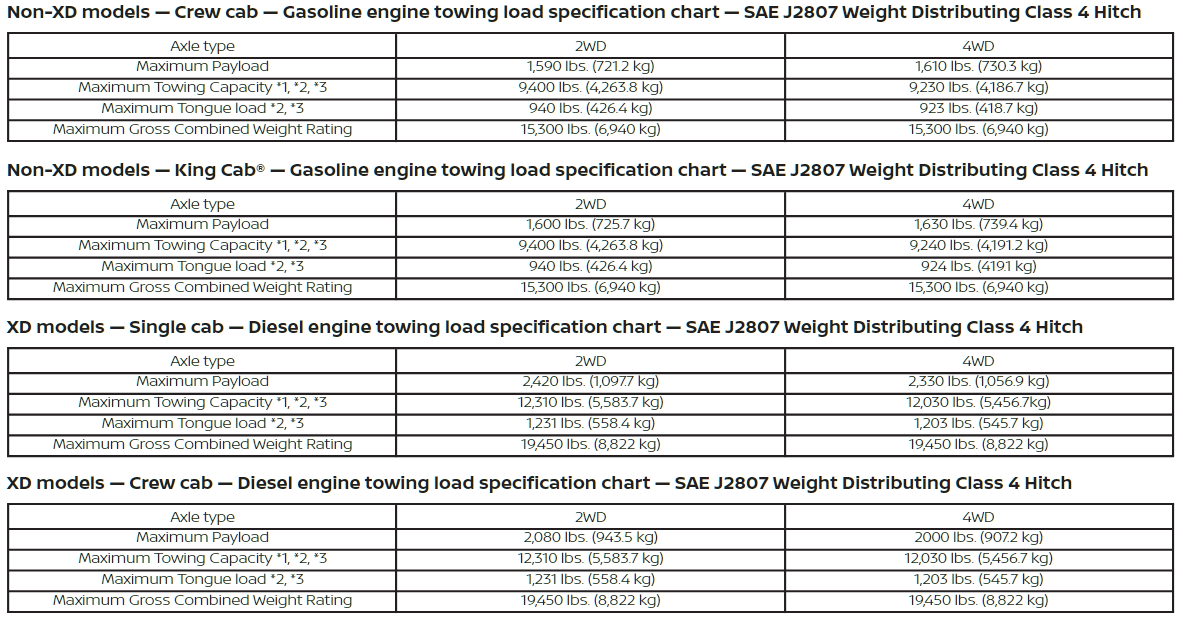 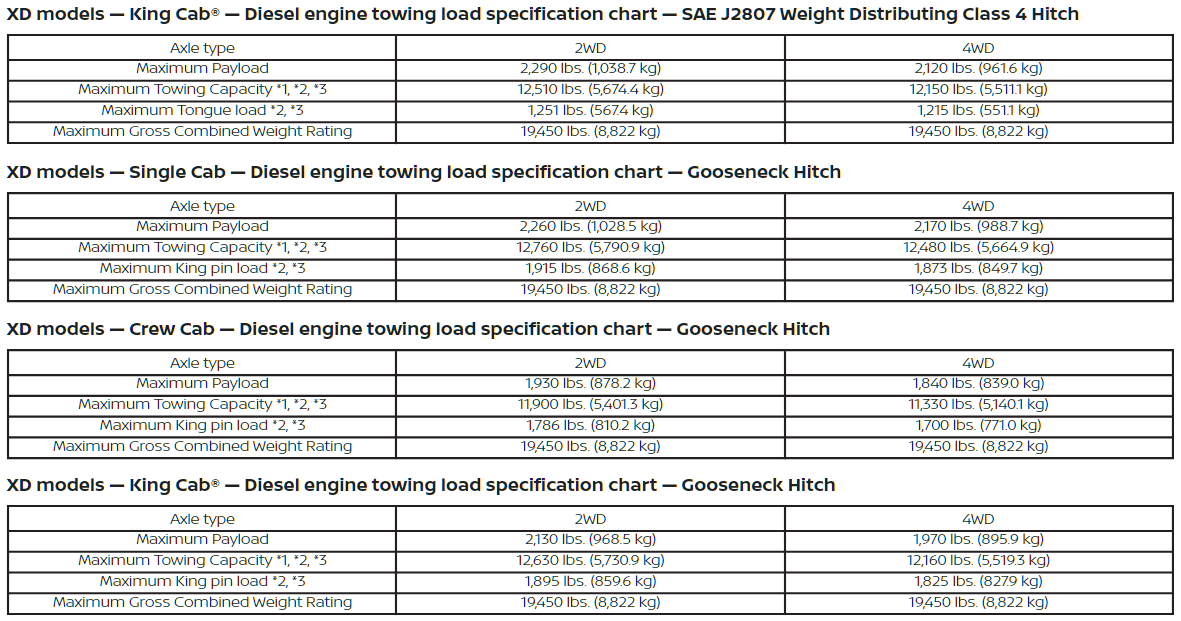 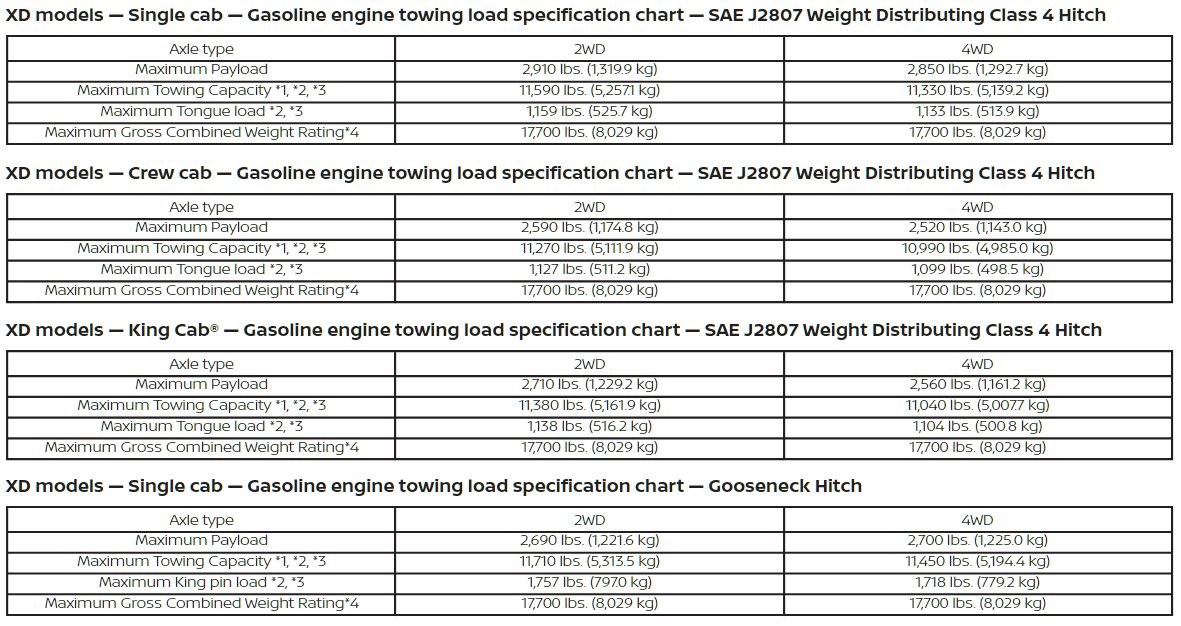 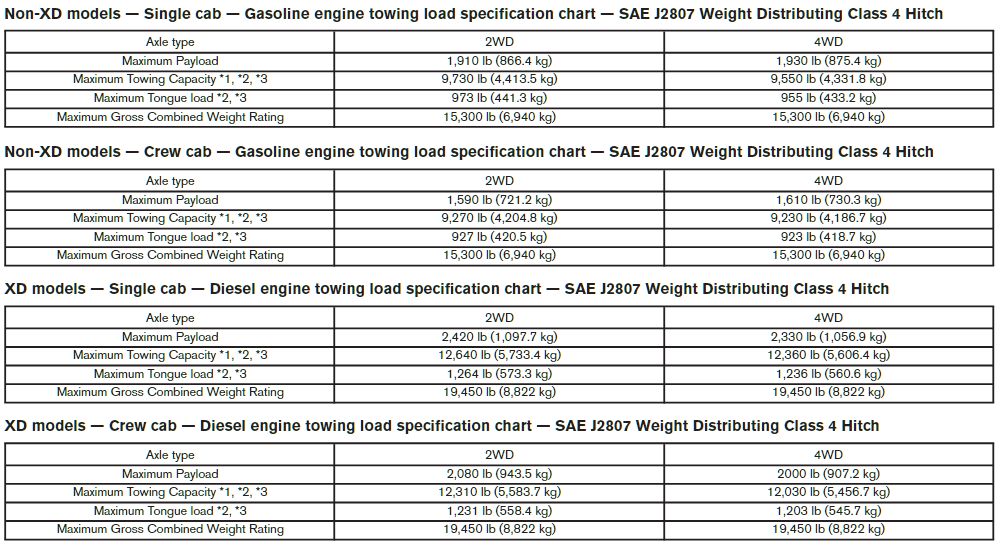 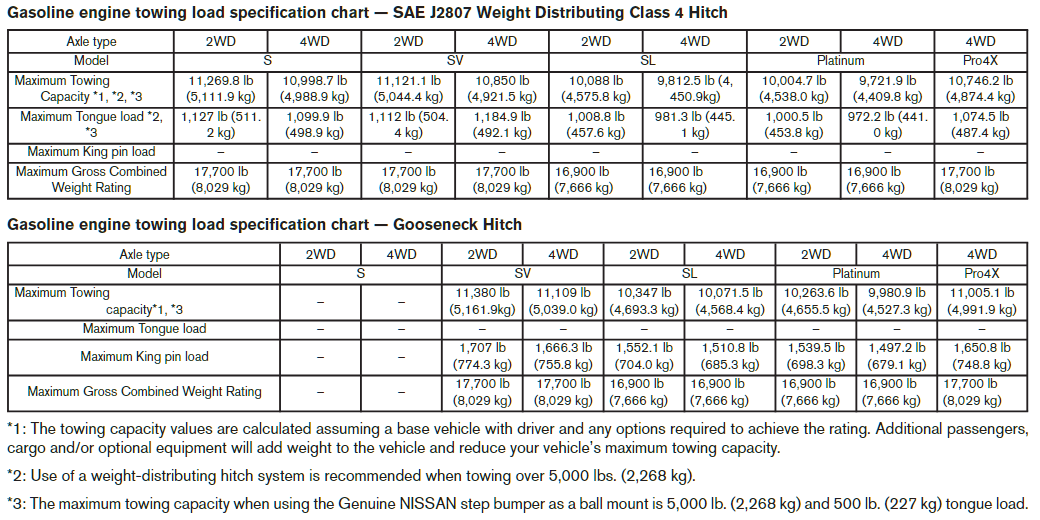