The tow packages for the Ford Escape were quite similar over the years when it came to what was included and they had some basic equipment that was included, as these SUVs were not equipped to handle a ton of trailer weight.

I went ahead and looked at all of the different trailer packages that were offered for the Ford Escapes over the years and summarized the data in this article. I hope that someone out there finds it useful!

A Brief Overview of What I Found:

Over the years, the Ford Escape didn't really change as far as the tow packages were concerned, in fact there were even some accessories that were offered for every model year from 2001, all the way up to the present.

What was included for all model years:

Other options that were available for specific model years:

The 2022-2019 models had the same exact chart when I compared the different years with the exception of the notes that applied to certain engines.

This was pretty basic equipment as far as the different components were concerned and was not really surprising since these model year vehicles had a relatively low towing capacity that topped out at 3,500 pounds.

There were different notes that were associated with different model years that we will discuss in further deatil next.

The trailer package was not available for all models and in fact was only available for models that had a certain engine equipped. I went over what engines this applied to. Keep in mind that the Hybrid models had to have either the SEL or Titanium trim level in order to have this package available to them.

2022 and 2021 models: The 536 package was available for models equipped with the 2.0L EcoBoost® engine or the 2.5L engine that came with Hybrid and Plug-in Hybrid models (for SEL or Titanium trims) only.

2020 and 2019 models: The package was included only for models that had the 2.0L EcoBoost engine equipped.

The 2018 Ford escapes had a trailer tow package that was unique to these model year vehicles alone, and there were actually two separate packages available, not just one. These two packages were labeled as package 534 and package 536 and consisted of different accessories.

Package 534 consisted of only a four pin wiring harness and a hitch receiver, and that was it.

The 536 package consisted of a four pin wiring harness, a hitch receiver, a trailer sway control feature for your vehicle and some models also had an automatic transmission oil cooler, along with paddle shifters on the steering wheel.

The 110 Volt power outlet that was listed was for the Lincoln MKC, which shared its chart with the 2018 Ford Escape. There were a few additional notes that needed to be taken into consideration that we talk about more below.

There were additional notes for the 2018 vehicles and they were marked with specific numbers that applied to certain engine options that were available.

Certain features also had limited availability and were also engine specific and I go into more detail about these variables below. 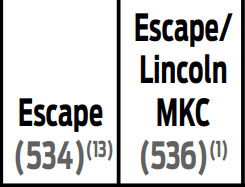 The auxiliary automatic transmission cooler and the paddle shifters were only available for models that had the 2.0L engine equipped and was marked with a (14) in the table.

The power outlet that was also available and marked as the (5) was only for the Lincoln MKC and did not apply to the Escape.

The 2017-2013 Ford Escapes had similar accessories that were included when we compare this chart to the 2018 chart, with the only difference being the automatic transmission fluid cooler and paddle shifters that were not available for these model years.

If we look at what's listed in the chart  for the 2017, 2016, 2015, 2014 and 2013 Ford Escapes, we can see that the four pin wiring harness was still part of the package, along with the class II hitch receiver and the trailer sway control option was still available as a vehicle feature.

The 2017, 2016 and 2015 charts shared their data with the Lincoln MKC, whereas the 2014 and 2013 charts did not share their data with any other vehicle. It still did not change the data though, and was the same for all five model years.

You will have to look closely at the notes because they are specific and do change for different model years based on the engine options that were available for these slaves that were made during specific years. Don't worry, I explain all of the variations below.

Moving On to the Additional Notes:

There were a few different notes for the 2017-2013 vehicles and really just lay out what engine options you needed to have equipped in your vehicle in order to be able to have one of these packages installed and I break down all of that information below.

The 2012 and 2011 Ford Escape towing package consisted of that four pin trailer wiring harness again, the hitch receiver and the trailer sway control option that was integrated in your vehicle, along with the automatic transmission fluid cooler.

The cooler was actually not part of the package this time, like it was for the 2022-2018 models, but was instead a standard feature that came equipped.

There were also different engine options available for these two years which are noted by the additional notes and signified with a (1) and I explain what these notes mean. 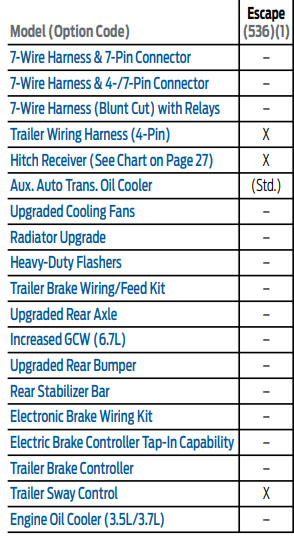 The 536 package that was listed for both the 2012 and 2011 Escapes were available for vehicles that had the 3.0L (V6) engine equipped. On a side note, it was also available as a dealer accessory if you had the 2.5L engine instead.

The auxiliary transmission oil cooler (automatic transmission) was actually not a part of the package, but was instead a standard feature for these vehicles.

These earlier model years really had the bare essentials when it came to their equipment compared to the later model year vehicles.

There were some notes that listed specific engines that are worth mentioning and I will dive into that next. 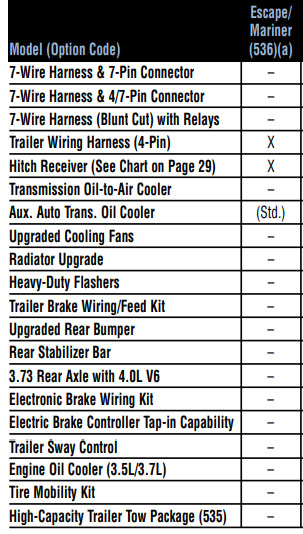 The 2010 chart mentions that this package is available with the 3.0L (V6) engine only. If you happened to have the 2.5L engine, then this was available as a dealer accessory instead.

For vehicles made in 2009, availability was only offered as a dealer accessory with the 2.5L engines and the Escape Hybrid was not recommended for towing, so it did not apply to those vehicles either.

If you had a 2008 or 2007 model, then this was only available with the 3.0L engines and was offered as a dealer accessory if you had the 2.3L engine instead.

For 2006 models, availability was for vehicles equipped with the 3.0L engine only and wasncluded with the XLT No Boundaries Package, if you had that installed. It was also available as dealer accessory with the 2.3L engines.

The 2005 Ford Escape really had the bare minimum when it came to the optional tow package that was available and if we look at the chart we can see that the only two accessories that came with this was a hitch receiver and then a four pin trailer wiring harness and that was it!

No other accessories were included like we saw in the later model year vehicles, which is quite surprising, especially considering that these SUVs had a decent tow rating.

There were limitations on which models actually could have this package installed, which I will get into next. 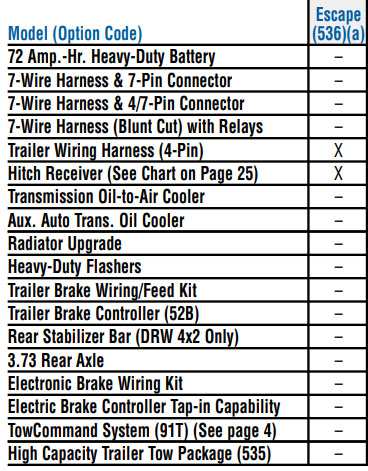 Availability was limited to vehicles equipped with a 3.0L engine, but was included with the XLT No Boundaries Package.

The 2004, 2003, 2002 and 2001 Ford Escape had a slightly different tow package that included the hitch receiver, a 4 pin wiring harness for electrical connections and the added accessory of an engine oil cooler.

This was only used on these model years and I am actually quite surprised that we didn't see them on any other model year vehicles. Those were the only three things that came with the 536 package.

There were no additional notes for these model years like we saw for all of the other years. 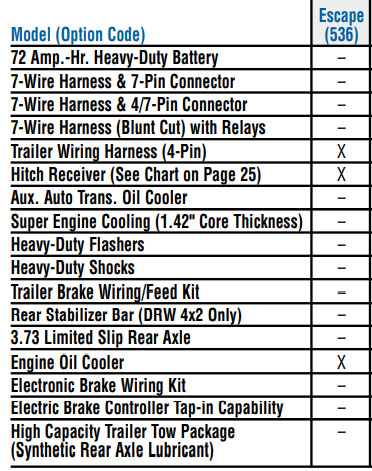 The Resources I Used...

To be honest, I only used one resource type for all of the information that you see in this article because that's all I really needed. By resource type, I am talking about the Ford towing guide, which is what I use for each individual model year and is how I gathered the data and how I was also able to sort the models by their respective years depending on what information was laid out in the charts.