The Ford Escape is a smaller SUV that has been around for quite some time now (since 2001) and, to be honest, I never really paid much attention to until now. After checking out some of the back history I decided to make a simplified towing capacity guide for the Ford Escape.

I broke down the data by the model years and listed some of the most important information regarding tow capacity specs. I hope it is helpful to someone out there!

Overview of the Data For the Escape:

This did depend on the engine equipped and seemed to be the main factor in the overall capacity threshold. There were 5 different groups of years that offered a little bit different engine configurations, which I have broken down in the tables below.

Engine Choices: There were many different engines used, since this vehicle's conception and the engine equipped really had everything to do with the specified capacity ratings. There were basically two different choices, for the most part and this was either a 4 cylinder or 6 cylinder engine.

The 4 cylinder engines seemed to have a maximum capacity between 1,000 lbs. to 2,000 lbs and the 6 cylinder engine was usually at the higher capacity of 3,500 lbs, with proper equipment installed.

Drive Train Configurations: The drivetrain configuration was pretty simple to figure out because of the limited options. The two choices were either a Front-Wheel Drive or Four-Wheel Drive.

The overall capacity for the Ford Escape was not really affected by the drivetrain configuration, it did change the GCWR a little though, which made sense, due to the added weight of a transfer cases on the AWD/4WD models.

Towing Capacity: Overall, there were 4 main ratings specified for the Escape and they were really a maximum number and less of a range.

The 2021 and 2020 models were nearly identical when it came to the specs in the charts but there were a few differences in GCWR metrics and for the 2.0L EcoBoost option. 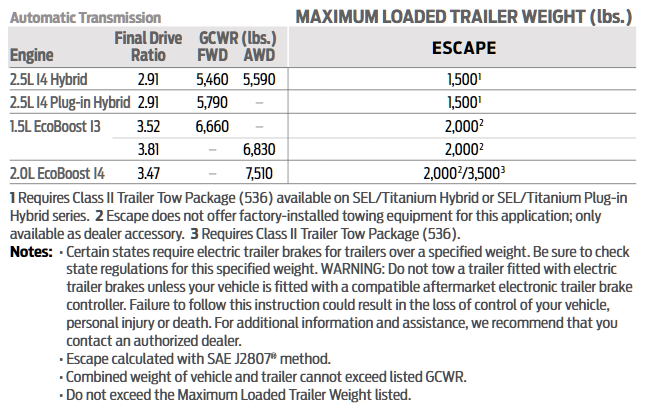 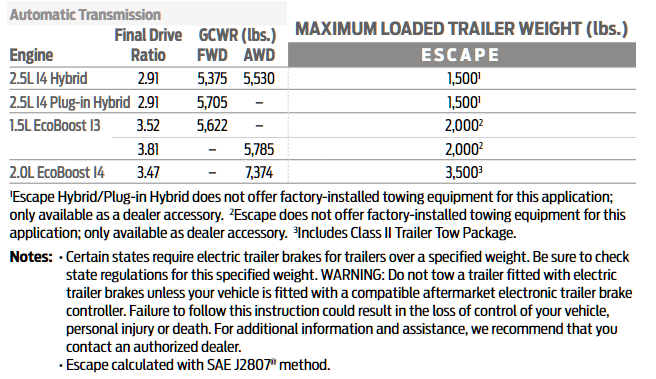 The Ford Escapes that were made from 2017-2019 had three different engine configurations and these were the 2.5L, the 1.5L EcoBoost engine and the 2.0L engine.

The 2.5L had the lowest toe rating and the 2.0L engine had the highest, as you can see from the table below. From 2009-2012, there were 4 different engine configurations, three of those were automatic transmissions and 1 was a manual transmission.

The manual transmission model equipped with the 2.5L engine had a 1,500 lb. maximum weight spec, as seen in the second table below. From 2005-2008, the metrics really stayed the same for these SUVs, as far as towing capacity goes but the engine configurations did differ from other years.

The only manual transmission model had the 2.3L engine equipped and had a maximum capacity of 1,500 lbs. There was only two different engine configurations for the first model years (2001-2004) and the weight specs were a little different, but not by much.

I used Ford's Towing Guides to gather all of the information in this article for the Escapes and wanted to link to them for others who might want to check them out for themselves. 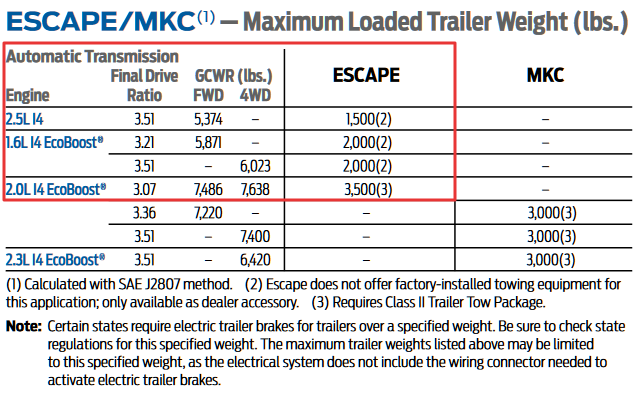 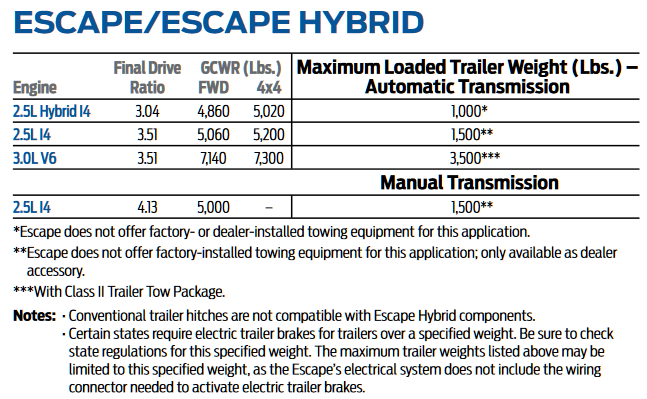 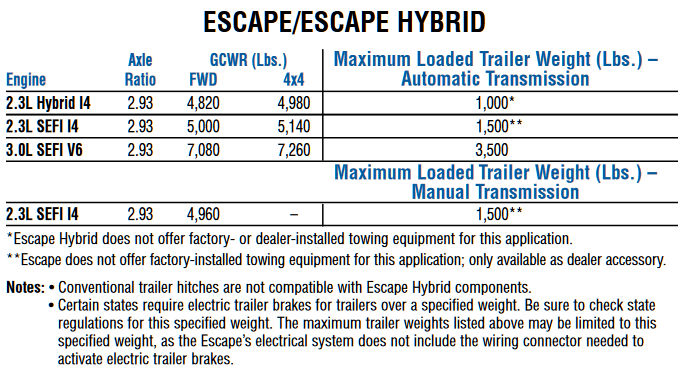