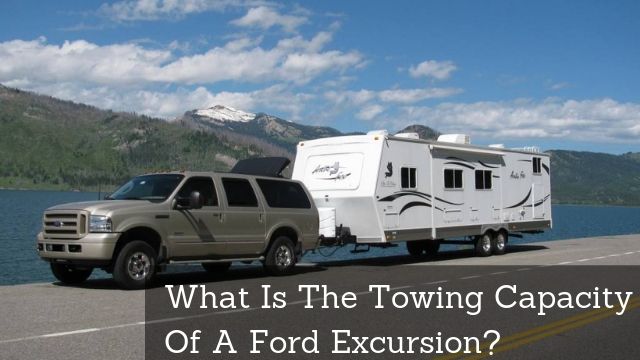 The Ford Excursion was only made for a total of five years, but it was a powerhouse when it came to towing capacity and some of the ratings I found are mind-boggling.

These came with different engine configurations and different axle ratios, which made the specs a bit different. Let’s dive in!

There were a few differences when it came to the capacity numbers, based on the different model years. The overall capacity was increased on almost every model of the Excursion in 2003 and later models.

Overview of the Data For the Ford Excursions:

4WD VS 2WD Models: If you study the charts, you will see a difference in the numbers for 2WD VS 4WD models and in some cases, there was a 400-500 pound difference between the two, 2WD models having the advantage over 4WD models.

This was only true for models that had the 5.4l engine equipped and the 6.8l engine though. I even found that for some model years equipped with the 6.8l motor had the same tow specs for both 2WD and 4WD models, so it was true only in certain circumstances.

Towing Capacity: The towing capacity ratings did not differ throughout the short lifespan of the SUV and in fact, there was only a difference of between 100-1,000 pounds for all model years and engines.

The 2005 and 2004 models had the exact same specs when you compare the charts, along with the same three engine choices, axle ratios and GCWR specs. We can see from the chart below that the average towing capacity for the 2002 Excursions ranged from 6,200-11,000 pounds, which was slightly different from the '03-'05 models. For the 2001 and 2000 model Excursions, we saw the same three engine choices that we did for 2002 but the overall towing capacity numbers were slightly different, ranging from 6,200-10,000 pounds overall. On some of the Ford Excursions, having a different gear ratio can make a huge difference in how much it can tow when the same engine is equipped.

There is a big difference in maximum capacity for these SUVs that were equipped with the 6.8L engines when looking at the 3.73 and 4.30 axle ratios.

How Do I Find My Axle Ratio?

There is usually a sticker on the inside of the driver’s side door jamb of most Ford vehicles and towards the bottom of that sticker, you will see the word “AXLE” and below it there will be a code. That code will signify which axle you have on your Excursion. Note: Sometimes your “AXLE” code on your sticker will be blank, which is what is reported by a lot of Excursion owners, but you can also find the code on the differential as well, along with what type of fluid the differential is filled with.

What Towing Package Did The Ford Excursions Come With?

Even though these SUVs were powerhouses, when it came to towing, they had a pretty basic tow package that came standard on nearly all models from 200-2005. These standard items were:

These were the standard three things that came with these vehicles and nothing else was available from the dealer in the form of an upgraded kit, as far as I could find. The only upgrades that I could find were ones that people had done themselves or had a shop perform for them.

As always, I like to post where I found my information and for the Ford Excursions, I used Ford's Towing Guides because the information was laid out in an easy to read format and was fairly simple, as you can see from the images of the charts above. 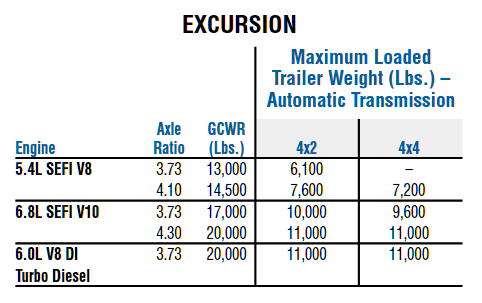 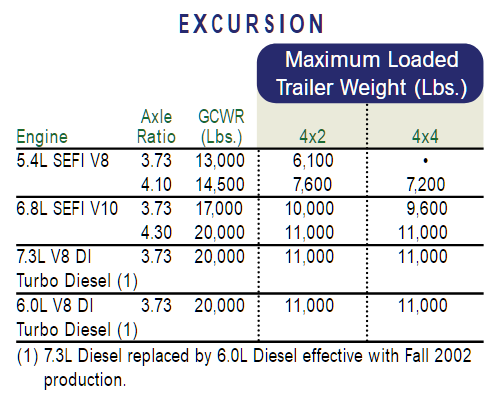 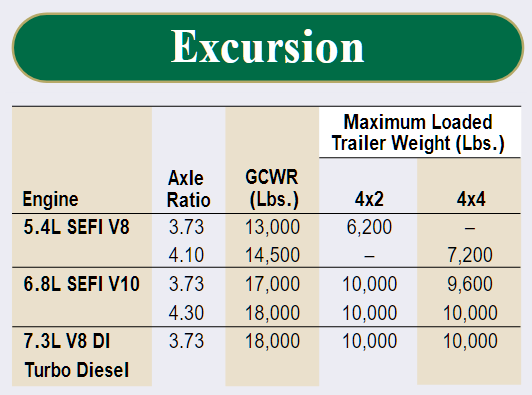 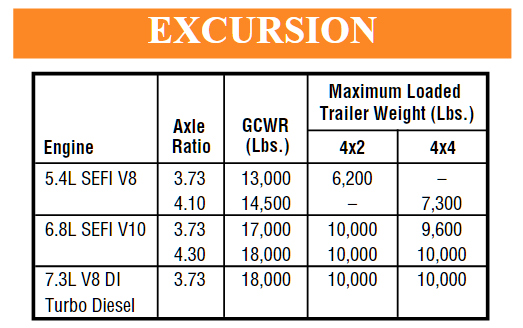