The 2018 F-150 had a pretty impressive maximum towing capacity of 13,200 pounds, if you had the proper tow equipment, engine, axle ratio, etc. equipped, which is mind-blowing for an F-150!

As impressive as that sounds though, there were also models that had as little as a 4,900 pound maximum capacity, which is a massive difference, right? There were certain things that affected the towing capacity numbers and I broke all of that information down for you in this article. I hope you find the information useful.

I tried to include all of the most important towing information for the 2018 F150s that I could but be sure you read the owner's manual to get all of Ford's recommendations on towing as well.

The towing capacity for the 2018 Ford F-150s ranged between 4,900-13,200 lbs. for all models, which includes all engine options, cab configurations and axle ratios. This is the overall capacity for both conventional and 5th wheel specs collectively. 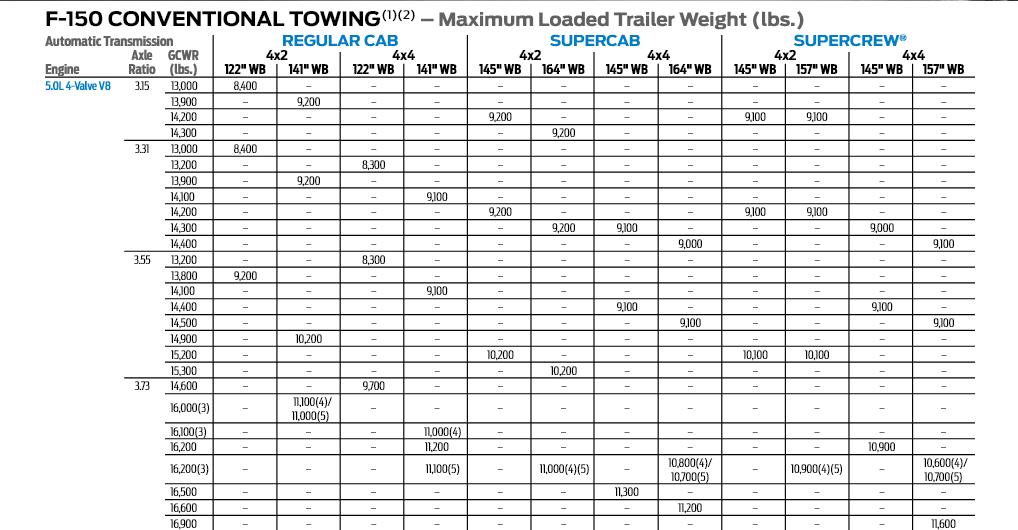 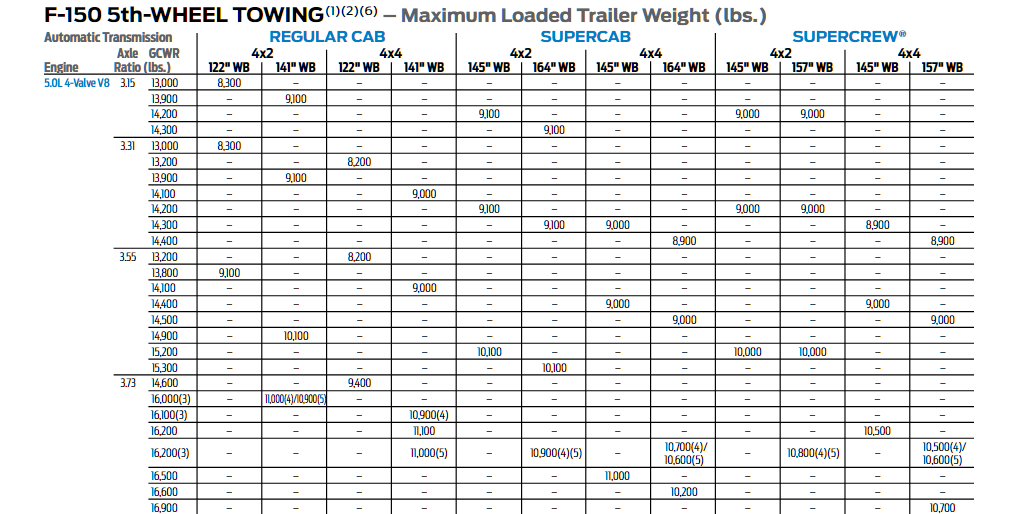 3.0L Turbo Diesel (V6): The 3.0L diesel engine that was an option for this model year F-150s was another strong contender for power, equating to an overall capacity range of between 7,200-11,400 pounds.

It is important to note that some of the lower ratings for the 3.0L engine came from the 5th wheel chart and seemed to be affected for models with either the shift on the fly transmission or the 2 speed (auto) 4WD transmission, but the same models had much higher ratings on the conventional chart.

2.7L GTDI (V6): The 2.7L engine was another lower powered engine compared to the other engines but had better overall numbers than the 3.3L engine though, so it was a surprise to me.

The capacity range for trucks that had the 2.7L engine equipped ranged between 7,500-9,100 pounds, which is quite impressive for its size.

3.5L (V6) EcoBoost: The 3.5L EcoBoost engine had the best tow ratings out of all of the other engines, even though some models came in at the low end of the spectrum.

If you had the 3.5L EcoBoost engine equipped in your F-150, then you could expect to see a capacity range of between 6,000-13,200 pounds. The really low numbers on the charts for the EcoBoost engine seemed to affect the Limited and Raptor models, as well as models with the 133" wheelbase.

Assumed Weight: For all of the tow specs listed in the charts, Ford will usually have weight assumptions in order to get a "control group". For the 2018 F150's, Ford assumes that there are two people in the vehicle, weighing 150 lbs. each (300 lbs. combined weight total).

It is also important to note that there is no cargo in the truck and all mandatory and standard equipment is installed on the truck.

Any additional weight from additional passengers, cargo weight or aftermarket accessories will have to be deducted from the trailer weights listed on the 2018 tow charts.

Here are the tow charts for the 2018 F-150s that I gathered from Ford's 2018 Towing Guide and they are accurate and come directly from Ford. There are two different charts that specify conventional tow figures and 5th wheel figures.

The conventional charts are what most people are interested in and will usually have a tow receiver mounted to their truck's frame from the rear underside of the vehicle. The 5th wheel hitch is less common but still widely used and will mount in the bed of the truck, right in the center and will also be connected to the frame. 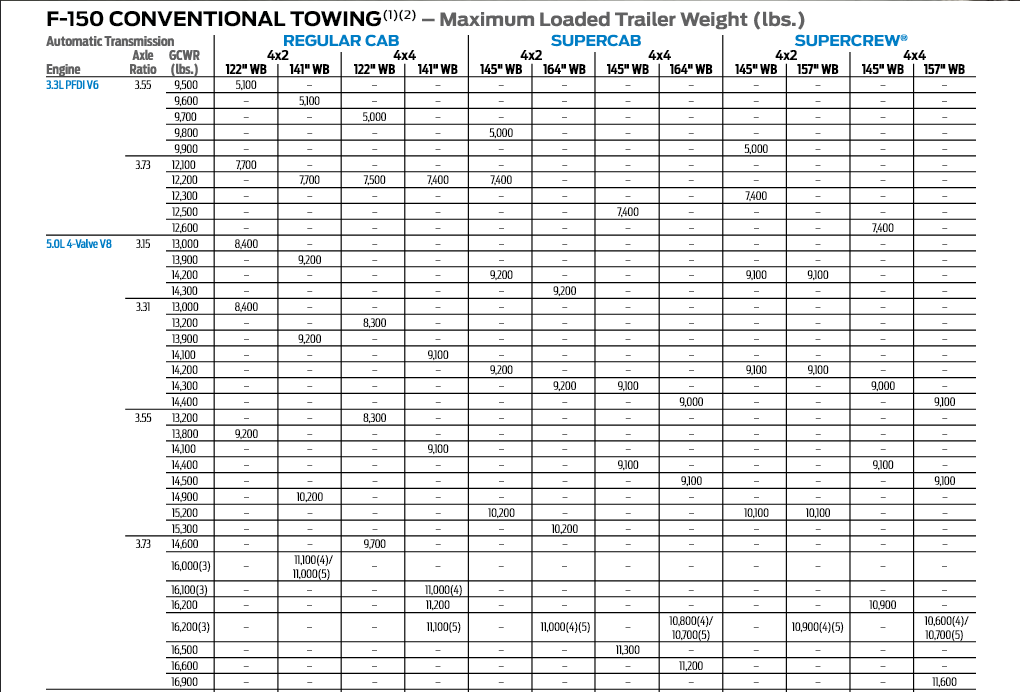 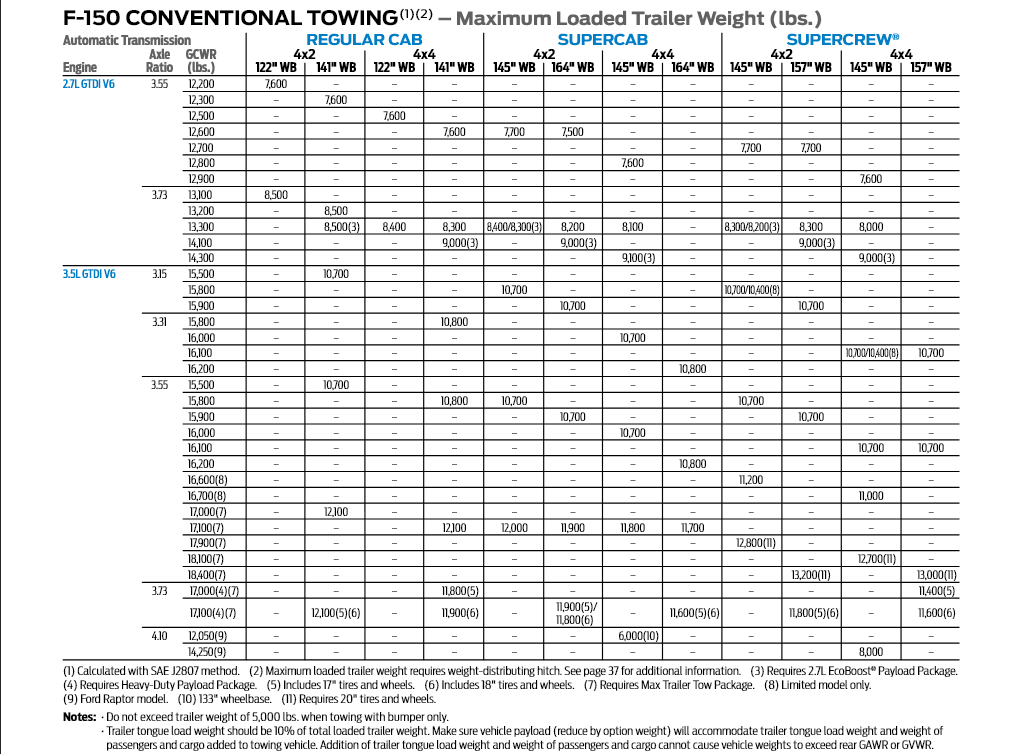 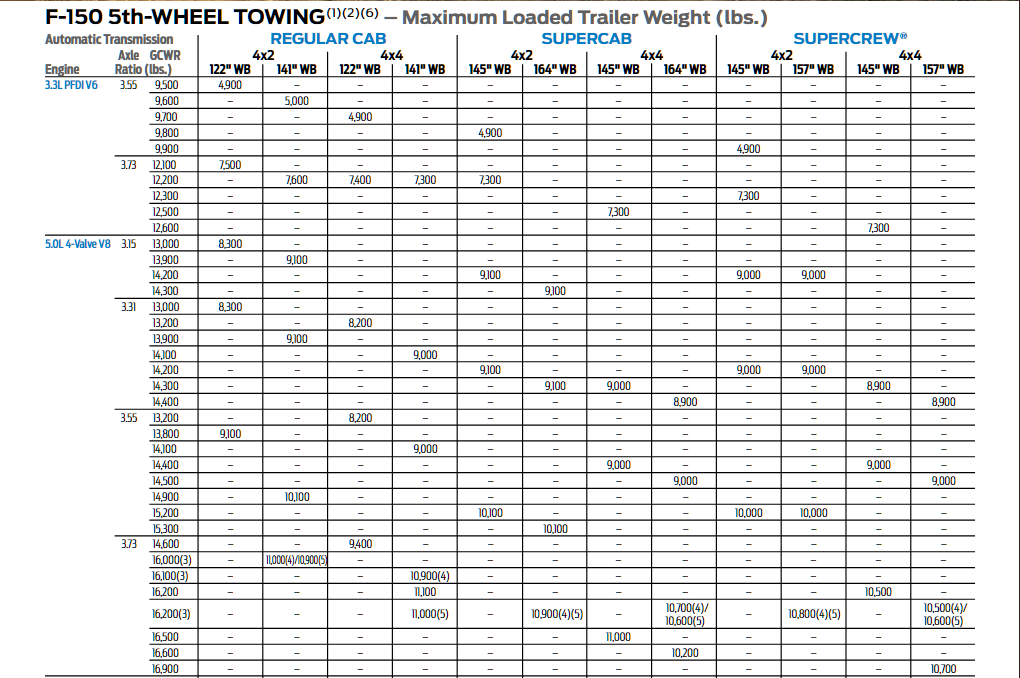 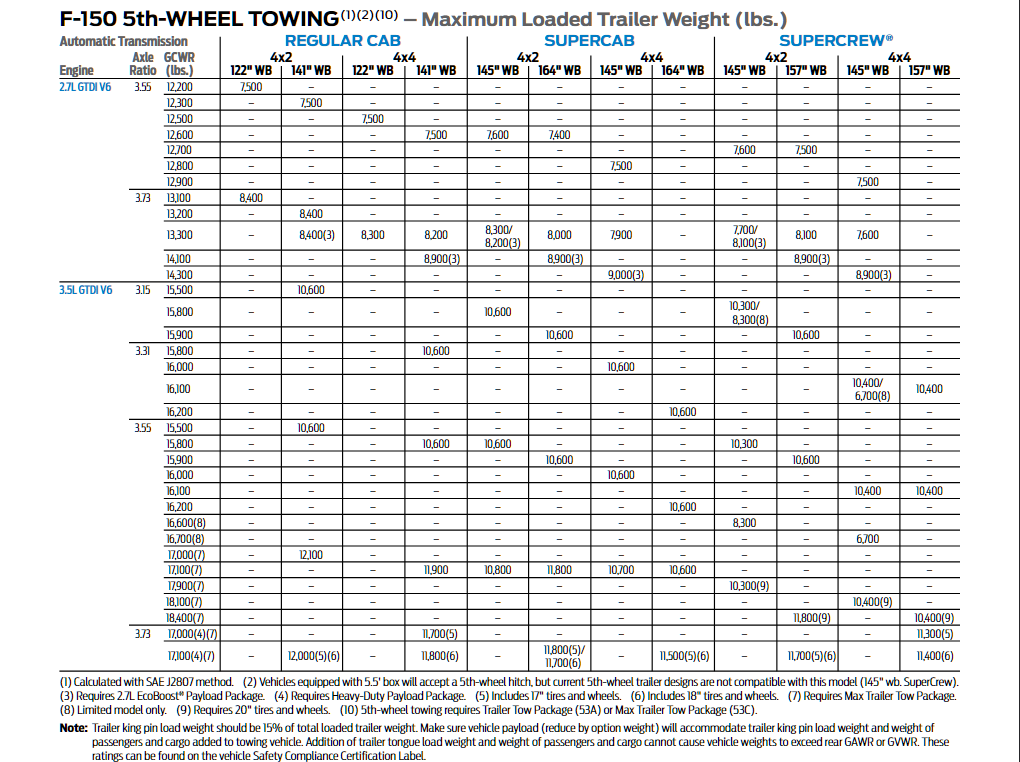 The 2018 Ford F150 tow charts had a lot of information to look through and finding out exactly what cab configuration you had, paired with the correct axle ratio and engine, etc. made things a lot harder to "plug in" your data to see your true numbers.

I made this short section that describes how to read the charts, where certain elements are located on the charts and how to use those to find your maximum trailer weight rating.

The charts I used in the examples below are not for the 2018 F-150 so do not use the data in those charts for your truck. These are used for example purposes only and to explain how to read the charts. The charts above are the correct ones for 2018.

Cab Configurations: The first thing you see in the 2018 charts is the three large columns at the top of the table that are labeled with the cab style or cab configuration, which you will need to know. These are represented by three main columns, outlined in the below example by the red boxes.

A little further down this article I talk about the three different cab styles and have an image that represents what the three styles look like and how they differ from each other.

Engine Equipped: What engine you have equipped in your 2018 F-150 is the most important variable when it comes to the trailer numbers and is listed on the left side of the tables in the form of a large row for each engine option, as shown in the picture below.

Axle Ratio: If we look to the right side of where the engines are listed, we can see that the axle ratios are listed, with their own rows inside of the engine row. There are more than one axle ratio option per engine and a very important piece of information you need to plug into the charts to get an accurate figure.

By now, you probably realize how important it is to plug in an accurate axle ratio number into the towing tables but how do I know what axle ratio I have equipped? Ford does not have the information posted anywhere in plain sight on the 2018 trucks but it is easy to figure out what you have and is really just a two step process...

If you open your driver's side door and look along the door jamb (lock mechanism side), you will notice a certification label with all sorts of information on it. At the bottom of this sticker, you will see an area labeled "AXLE" and below that  a code of sorts.

You will want to write that code down and then compare it to the chart I have listed below. You will then have the axle ratio that was used for your truck.

Alternatively, if your sticker is missing, you can climb under your truck and look around the rear differential case to see if you can see a tag on there that will state the axle ratio as well.

Feel free to look through the table, as there were some interesting options available for this model year truck that I normally don't see. 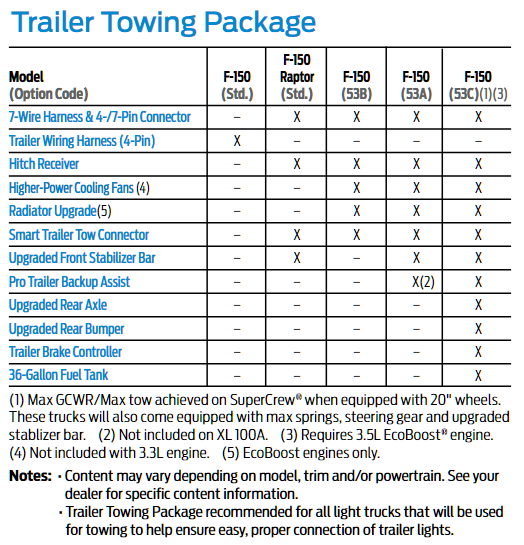 What About The Wheelbase?

In the tow tables, wheelbase measurements were mentioned from time to time and all that refers to is the distance between the front and rear axles, measuring from the center of each wheel to the other.

Knowing what type of engine you have equipped in your 2018 F-150 is one of the most important elements to the "equation" when it comes to figuring out what your maximum trailer weight capacity is.

If you do not know what engine you have equipped, then just follow these couple of steps to determine what you have.

The first step is to grab your VIN, which is located in a couple of different areas but the easiest locations are on your registration card or on the dashboard on the driver's side, when looking into the vehicle from the outside.

Once you have the VIN, you are then going to plug it into a VIN decoder, which can be found many places online, but I prefer to use this website because it provides all of the information I need in an easy to read layout.

Just plug your VIN into the box on the website and click the search icon on the right and then it will spit out all kinds of useful stats about your truck. We are looking for the engine though and you will find that if you scroll down just a little bit and it will be listed in the column labeled "Engine Model". This will tell you what engine you have installed in your truck when it came off of the factory line.

It is important to know what type of cab configuration you have on your truck and in fact, is an essential piece of information when looking up your maximum trailer weight limit in the charts.

Below is an image I pulled from the web that shows different manufacturer's cab styles and what their respective names are. Ford's names can be found on the third row down and the corresponding images above that illustrates what the three cab styles look like.

There were a lot of helpful tidbits regarding towing in general that I found in the owner's manual and I recommend that you look through your 2018 manual to see what limitations and capabilities your truck has.

Below are a few screenshots of some of the other towing information I found in the owner's manual, mainly consisting of cautionary weight limit stuff but important nonetheless. This is just a few of the items I found in the manual and I wanted to point out that this is nowhere near all of the information that is in the manuals, so be sure to read up on it for yourself. 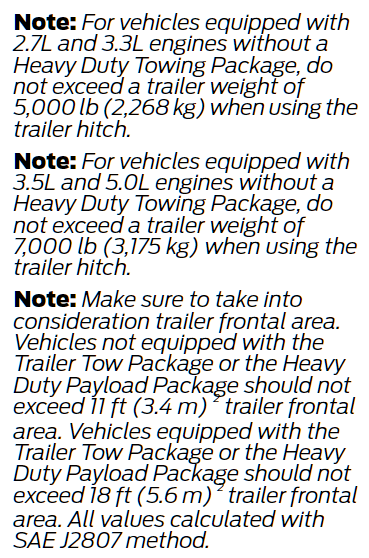 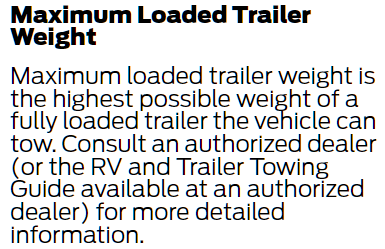 The towing guide provided all of the nice tow charts that I took screenshots of and posted to this page and the owner's manual contained all of the other helpful tow related information but it also had tow charts of it's own, just not as nice and organized looking.