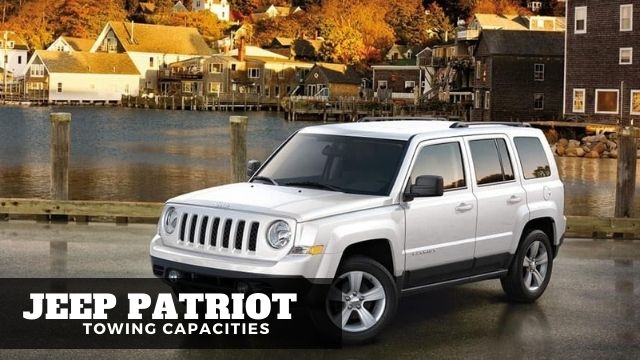 The Jeep Patriot is a smaller SUV that is geared more towards off-road enthusiasts and adventurers, but most people probably don't realize that they have a decent towing capacity attached to them as well.

In this article, I look into how much these SUVs can actually pull and gathered tons of information from many sources and put it all together in a sort of "resource guide" for all of you out there who may be wondering what these are capable of pulling. Let's get into it!

Overview of the Data For the Patriot:

Engine Choices: There were only two different engine choices for the Patriots for the entire life of the vehicle which were the 2.0 and 2.4 liter engines. When it came to overall trailer weight rating capacities, the type of engine you had equipped didn't really make a lot of difference, believe it or not.

What made the difference was whether or not you had an optional package installed on your vehicle, which gave you additional accessories that allowed you to pull much more weight with your Jeep.

Tow Packages: There were only two separate packages that were available, but these were the main "variable" that affected the overall weight rating specifications.

The choices were between a standard trailer tow prep package and another package that Jeep calls the Freedom Drive II off-road package which came with everything that the prep package came with, plus additional features, that were geared more towards off-road use.

Trim Levels: There weren't many trim levels available for these SUVs over the years and it didn't really matter what your trim level was, when it came to your maximum trailer weight rating. Let's break down the data by trim level, so we can see the main differences:

Overall Capacity: The overall towing capacity for the Jeep Patriots ranged from 1,000-2,000 lbs. over the years really didn't change at all, in fact, that capacity range was true for all model years. The only variables I noticed were in the engine/package combinations and small differences in the maximum trailer tongue weight ratings for some model years.

Other than that, everything stayed the same over the years.

Some of the models I have listed below share the same exact specifications and weight ratings in the charts I found in the owner's manuals.

Instead of reposting the same chart multiple times for each model year, I consolidated the model years that shared the same specifications and grouped them together, but the information was exactly the same.

Always read your owner's manual to get the most up-to-date information on your vehicle, including all of the tow related information Mopar suggests.

Now there were two different engines offered for these model years which was the 2.0L or the 2.4L engine, but as you can see from the chart below that did not make a difference when it came to the overall weight capacity ratings.

The only thing that really mattered was whether you had one of these packages installed on the vehicle which gave you double the capacity, making that 1,000 - 2,000 lb. ranged capacity rating we see.

I also wanted to mention that in the chart we not only have the maximum gross trailer weight rating specs but also the maximum trailer tongue weight capacities listed, along with the maximum frontal areas for your trailer.

The other information was almost identical to the 2017-2014 models when we look at the maximum towing weight ratings, along with the gross trailer weight ratings and the maximum frontal area of your trailer as well.

Like I mentioned earlier, the only real difference was that there were only three options for the 2013 - 2010 models, instead of the four options we saw with the later model years.

The 2009 models were giving their own section in this article, even though most of the information in the chart below is almost identical to the 2013 - 2010 models.

We still see the overall towing capacity for the 2009 Jeep Patriot of 1,000-2,000 lbs. listed in the chart for the 2009 models, except for different maximum tongue weight ratings, which seems to have a larger overall capacity for all models.

Other than the different tongue weight ratings, everything else in the chart was identical to the 2013 - 2010 models.

If we look at the chart below, we can see that there were only two rows listed, (that used the same engine) and the only difference between the 1,000 and 2,000 pound rating was whether you had a trailer tow prep package equipped on the vehicle.

I'm always a little bit disappointed when the charts do not include other important information like gross vehicle weight ratings or gross combined weight ratings, because they are essential pieces of information when calculating more complex towing calculations.

For the Jeep Patriots, I was able to find out that the gross vehicle weight rating and gross axle weight rating figures are located on the certification label, which can be found on the driver side door jamb, when the door is open. 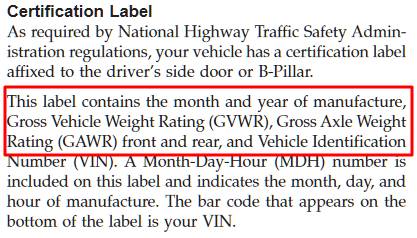 As for the gross combined weight rating, I was not able to find anything in the owner's manual or any other literature at the time of this writing. If I do find anything I will update this post as soon as possible so that you can use this specification in your calculations.

Since all of the model years we looked at had a 2,000 lb. maximum capacity, having trailer brakes installed for trailer weights between the 1,000 - 2,000 pound range are recommended and not required by the manufacturer.

Be sure to check with your local state requirements, as they could require trailer brakes for trailers that weigh less than what the manufacturer suggested.

There were two different packages they were offered for the Patriots which gave you the higher trailer weight rating capacities and these were labeled as the AHC package and the AWL  package. These were essentially optional features that allow the vehicle to compensate for the additional weight in the trailer, along with other additional features that were not related to towing.

The AHC package was also known as the trailer tow prep package which included in engine oil cooler, a full size spare tire and a trailer wiring harness, to hook up your trailer lights and brakes. I was able to find a screenshot from the 2017 models brochure that I attached below.

The AWL package had much more to offer than the AHC package, as you can see from the screenshot below I took from the same brochure. Not only does the Freedom Drive II package have the oil cooler, full-size spare and trailer wiring harness but loads of other stuff that is essentially geared towards off-road/4-wheel drive enthusiasts. 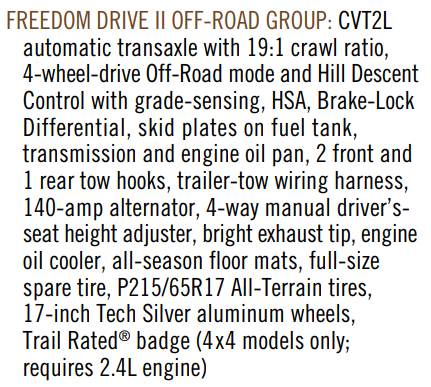 Knowing if you have one of the package is installed on your vehicle, whether it be the AHC or AWL package is going to be harder to identify for most people. The three main items that you need to look for is the oil cooler, trailer wiring harness and full size spare.

Unfortunately, I was not able to find any information online that stated how to identify whether or not your vehicle has one of these packages installed so your best bet is to take it into a dealership to see if they can confirm whether you have one on your vehicle.

It is important to remember that factory-installed accessories are different from aftermarket accessories and usually manufacturers will not warranty aftermarket parts, they will only warranty parts that were installed from the factory.

The owner's manuals are always my go-to source when it comes to research and for the Patriots, they proved very useful for all of the information I have listed in this article and the charts I have listed came directly from the manuals themselves.

I wanted to provide direct links to the owner's manuals, which you can find below, so you can easily read them yourself and do your own research, if you want to.

The brochures I found online, (which I did not link to) also proved to be very helpful and are model year specific, so when searching for these online make sure you type in the year of your vehicle, the model and the word brochure, and you should find a specific brochure for your model year, in most cases.