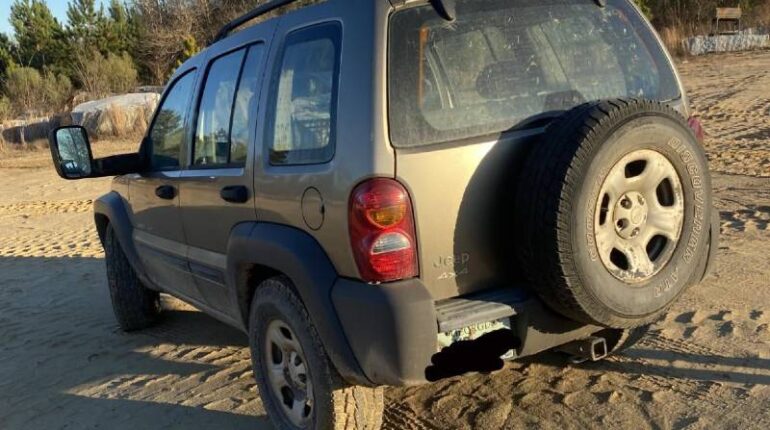 The Jeep Liberty is a smaller SUV and is not as well known as the Wrangler or the Grand Cherokee, but these were popular up until 2012 when they were discontinued. I did a little bit of research to see what the towing capacity on these vehicles was, and I was quite surprised by what I found out.

I searched through all of the owner's manuals for all of the maximum trailer weight rating specs and included screenshots of the various charts I found and posted them here in a sort of "resource guide" type of format for those of you out there that may be wondering what your specific model year's weight limits are with this vehicle. Here's what I found out!

Overview of the Data For the Liberty:

Engine Choices: The engine choices for the Jeep Liberty really stayed the same throughout the years, having a 3.7 L engine equipped and most model years, with the exception of the 2004 - 2006 models, which had an optional 2.4 liter engine, along with a 2.8 L diesel option.

The engine equipped really didn't make that much of a difference when it came to the overall capacity numbers though, other elements came into play like having a tow package installed and using a weight distributing hitch.

Configurations: There were different variations in configurations that were listed in some of the charts, but not all of them made a difference when it came to the capacity numbers.

Two-wheel drive and four-wheel drive models didn't seem to make a difference as far as the maximum trailer weight ratings were concerned, but other things like the type of transmission you had equipped, whether you had a cooler installed or a tow package installed and what kind of hitch you were using made a huge difference, in most cases.

Towing Capacity: Throughout the years, the towing capacity really stayed the same overall and range from 2,000 - 5,000 lbs. for all model years. If we look at the data in the charts that I have listed in this article, we can see that there really were only three different trailer weight limits listed and these were either two thousand pounds, 3,500 lbs. or 5,000 lbs.

Make sure you always read your owner's manuals to get all of the information that Mopar recommends for your vehicle, including load limits, break in periods, etc.

If you look at that charts below you can see that the standard models have that lower 2,000 lb. capacity rating while the models that had a tow package equipped AND that were using a weight distributing hitch had the larger 5000 lb. capacity. 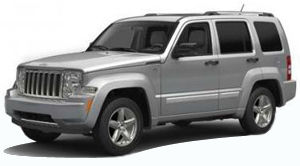 This was really the only difference between the two models and why the capacity range was so different. It is not uncommon for vehicles that have tow packages equipped to have double or triple the towing capacity, in some cases, compared to vehicles that do not have them equipped.

The charts for the 2009 models looked a little bit different than the 2012 to 2010 models and if you look closely you'll notice that the higher-capacity ratings are listed for models that had a cooler equipped and doesn't mention anything about a tow package being equipped.

If we were to break down the charts below, we can see that the standard base vehicle was able to haul that 2,000 lb. capacity, while models equipped with a cooler had an upgraded capacity of 3,500 pounds.

In order to achieve that 5,000 lb. capacity rating your vehicle would need to have that cooler equipped, along with a weight distributing hitch when pulling the trailer behind you, like we saw with the 2012 - 2010 models.

The 2008 models had the same 2,000 - 5,000 pound towing capacity rating, according to the charts, but as you can see below the charge for a little more complex and had more options available in this model year.

The chart was broken up into manual and automatic transmission models, along with models that had a cooler installed.

If we look at the charts below we can see that the models that did not have a cooler equipped had a capacity range between 2,000 - 3,500 lbs. and that was dependent upon whether you had a manual or automatic transmission.

Models that had a cooler installed also had a little bit higher rating, coming in at 3,500 pounds and if you had a cooler equipped and were using a weight distributing hitch, you had that maximum rating of 5,000 lb.

I did want to make a note that the 2006 chart has an additional option that shows a 2.8 L diesel engine, equipped with an automatic transmission that had a higher 5,000 lb. capacity rating and that was the only difference between the 2007 and 2006 charts.

The 2005 and 2004 model still had that 2,000 - 5,000 lb towing capacity range that we saw with all of the other model years but if we look at the chart below oh, we can see that it looks very different from any other model year that we've looked at so far. 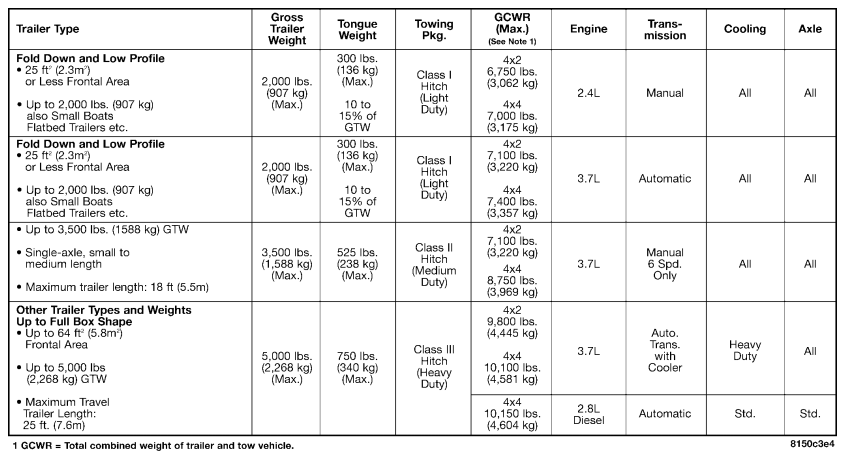 Most of the charts we looked at had the gross combined weight rating specifications listed in the charts themselves, but they were not listed for model years 2009 - 2012. If you do want to find that information you can usually find it on the safety certification label on the door or door pillar of the driver side of the vehicle, if you open the door.

I was also able to find a screenshot from the owner's manual that I posted below that assumes a driver weight of 150 lbs. in the gross combined weight rating specifications, so you will not have to compensate for that, only additional passengers and cargo in the vehicle plus your trailer weight.

The gross vehicle weight rating and gross axle weight ratings we're not specified in any of the owner's manuals for the Liberty, but I was able to find this little note that states where you can find this information.

I went ahead and took a screenshot from the manual, and it states that you can find the gross vehicle weight rating and both gross axle weight ratings on the safety certification label, which is located on the driver side door or pillar, when you open the door. 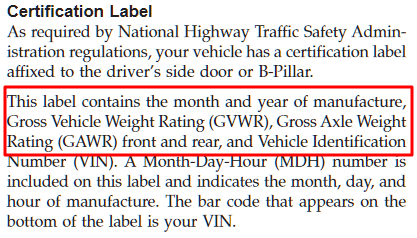 On To Trailer Brakes...

Like most Mopar vehicles, trailer brakes are recommended when towing 1,000 lbs or more and are required when towing 2,000 pounds or more.

So this is basically a safety measure and trailer brakes are only really REQUIRED if your trailer exceeds 2,000 lbs., but if you wanted to be on the safe side you could always hook them up for anything over 1,000 lbs.

You will want to make sure your state's laws coincide with the recommended rating when it comes to trailer brakes and the overall weight of the trailer to be sure you are "road legal" when towing in your specific state.

All of the tow charts had a maximum weight specification listing of around 5,000 lbs., but this was only for vehicles that were using a weight distributing hitch.

I was able to find (in one of the owner's manuals) where it talks about using a weight distributing hitch for any trailers that weigh over 3,500 lbs. and is a mandatory accessory that you need to use and not just a recommended accessory.

I did a little digging online and was not able to find out any definitive answers from Mopar's website that stated what was included in the tow packages that came installed on the Jeep Libertys.

I did find a few comments in a couple of forums that mentioned some of the equipment that was installed, but I couldn't find anything printed from the manufacturer that verified this information, so I decided not to post it.

If you want to see if you have one of these packages installed on your vehicle, then your best bet is to take it into a dealership and see if they can identify whether your vehicle has one installed.

Resources I Used In This Article:

I used the owner's manuals to gather all of my information for the Jeep Liberty and was able to find most of them through Mopar's website except for the 2004 manual, which was not available for some reason, so I went ahead and listed a third party resource instead.

On a side note, I was not able to find the 2003 or 2002 manuals anywhere online but if they do become available at some point I will update this post as soon as I get that information to keep this article as up-to-date as possible.