The Audi Q5/SQ5 is one of the most popular SUVs in Audi's lineup and is a vehicle known for luxury and comfort. There is more to them though and they are actually capable of towing some moderate amounts of weight, especially for their size.

I did research on the Q5's to see what they were capable of pulling and if it was even enough to talk about and indeed, it was!

Overview of the Data For the Q5's:

Engine Choices: No engine choices were listed for the Q5's in the information when I was looking through the owner's manuals. I assume that the engine equipped did not affect capacity numbers.

What Affected The Numbers: The main element that affected the numbers for the Q5's was whether or not the trailer you were hauling had it's own braking system. The difference between an unbraked and braked trailer was 2,750 pounds.

Many of the Q5's charts below apply to many different model years and is why you will only see one chart but the information is identical with no variations.

It is important to note that Audi specifies that grades above 12% are not recommended when pulling a trailer with the Q5's. All of the charts specify a 12% grade maximum limit.

This article encompasses Q5's and SQ5's that had the same ratings and in fact, they shared the same owner's manuals, as you can see in the image below.

The 2021 model years had similar specs to the other model years when it came the overall specs but where it varied was on the lower end of the spectrum, where the 2021 models had a 350 pound advantage. I wanted to clarify the engine (model) information in the table below that is shown in the left-hand column. The Q5 and SQ5 had a maximum capacity of 4,409 pounds but models that have the TFSIe engine equipped only had a maximum rating of just 2,000 pounds.

The maximum tongue weight for the 2013-2020 Q5's was set at 10%, which equates to 440 pounds. One thing I wanted to point out was that there was a chart for some of the newer model years but not for all of them and the two pictures below illustrates this.

It is also important to note that the 2013-2017 models state that these weights are applicable to a factory installed hitch OR an aftermarket hitch.

The 2009-2012 Q5's had almost identical ratings and specs that the 2013-2020 models had but there was a slight difference in the max. capacity numbers for the trailer weights and tongue load. Where I Found My Information:

I found all of the charts and other towing information on the Q5/SQ5 from Audi's website, where they have a database for all of their owners manuals. You have to input a VIN and then submit that VIN and it will give you different results for your Q5/SQ5.

I wanted to link to the articles but since they use VIN for pulling up their data, the sessions would expire before anyone would ever get to see the manual, so you will have to look up the manual. 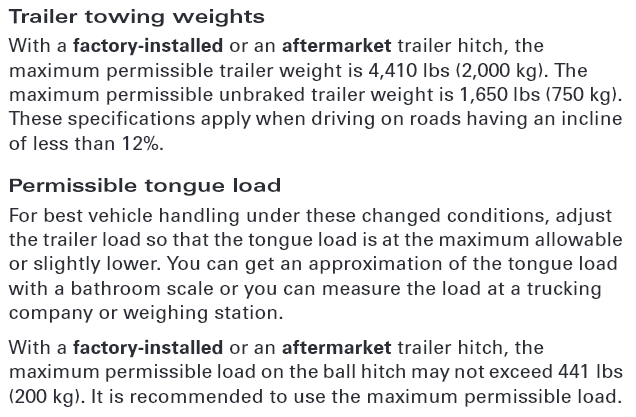