When looking through some of the specs online for the Hyundai Santa Fe, I found that the towing capacities were quite vague and left out a lot of the important details that needed to be considered when calculating your maximum trailer weight capacity.

I wrote this short and concise article on the different tow specs for the Hyundai Santa Fe to help others out that may be wondering what they can haul, what the specs really are and so on. Here goes!

Overview of the Data For the Hyundai Santa Fe:

Engine Choices: There were a range of engines that were offered for these SUVs over the years and most were either 4 cylinder or 6 cylinder engines.

The type of engine that was equipped did impact towing capacity significantly in some cases for certain model years, the difference being 700 lbs. or more in some cases.

Configurations: The two main configurations I saw for the Santa Fe's were the choices between 2WD or 4WD models and manual versus an automatic transmission.

The only year that had a manual versus automatic transmission specified with different specs was in 2014. The difference was roughly 1,100 lbs., which is huge! The 2WD and 4WD models ranging from 2001-2006 did have a little variation in the overall capacity numbers between the two configurations of roughly 500 lbs.

Towing Capacity: Over the many years that the Hyundai Santa Fe's were made they had quite a wide range when it came to the capacity numbers. This range was from 1,000 lbs. to 5,000 lbs. and was dependent on several factors.

The most common factors were whether the trailer was equipped with a brake system, if you had a tow package installed and the type of engine you had equipped in your vehicle.

Note that Hyundai did refer to the max tongue weight as "static vertical load" and the figures were roughly 10% of the maximum trailer weight, which is typical for most maximum tongue weight figures.

The 2021 models had completely different engine options than other model years, but the overall ratings were relatively close to the 2020 and 2019 model year SUVs, within 1 pound, believe it or not!

The specs were divided up by transmission equipped (Automatic or DCT) and by trailer brake options. Of course, the specs were higher for trailers that had a braking system integrated within them that was separate from your vehicle's braking system, around 350-1,150 pounds higher, in fact! The range for the 2020 and 2019 models did depend on the type of engine that was equipped, whether the trailer had a braking system equipped and whether or not your Santa Fe had a towing package installed.

There was only one engine available and this was the 3.3L engine, so it made sense that the specs were similar for all of the model years that used this particular engine.

The maximum tongue weight was set right at that 10% mark of the maximum capacity which would equate to 165 lbs., 200 lbs. and 500 lbs. depending on the maximum towing capacity of your Santa Fe's configuration. The 2014 Hyundai Santa Fe's were really a stand alone type of vehicle from the other model years and had a maximum towing capacity range of 1,653-5,512 lbs. The three engines offered were the 2.0L, the 2.2L and the 2.4L engines. The 2010-2012 Hyundai Santa Fe's had a maximum towing capacity that ranged from 1,653 lbs.-3,500 lbs. depending on which engine you had, if a tow package was equipped and whether or not the trailer you were pulling had a braking system equipped. The higher capacities of 2,800 lbs. for the 2.7L engine and 3,500 lbs. for the 3.3L engine were specified if the trailer you were pulling had brakes equipped and you had a tow package installed.

Like other years, the specs fluctuated based on brake equipment installed and tow packages, as you can see in the chart below. Note that Hyundai also states that you can add 1,000 lbs. to the total capacity if pulling a boat trailer. The 2003-2006 Hyundai Santa Fe's had a pretty elaborate table for the three engines offered and the weight capacity limits ranged from 1,000 lbs. to 3,500 lbs. depending on the engine you had equipped, if you had a 2WD or 4WD model and if you had brakes equipped on your trailer. The 2003-2006 model year charts also showed a "Type A" and "Type B" example where they stated real life examples and the number of passengers that the car might have, which is going off of the GCWR of the vehicle and is a smart way to lay out the capacities. The range depended on the same factors too, which was whether the vehicle was a 2WD or 4WD model and if the trailer you were pulling had it's own braking system installed. This was a very hard question to answer and it seems that no one had a clear and definitive answer. I know from experience that you will need a receiver hitch, a wiring harness for the trailer and a connector at the very least.

The question that I am wondering is if a transmission and/or oil cooler is added or upgraded, the rear axle ratios are modified, if an upgraded radiator is added and so on in the "factory tow package" for these Santa Fe's.

If I do find an answer or any other info, I will pot it ASAP!

Resources For The Hyundai Santa Fe:

I always like to include the resource material I use to gather and compile all of the towing info so others can take a look at it too. Below is all of the owner's manuals to the various Santa Fe's used in this article, which have the attached charts and other helpful information. 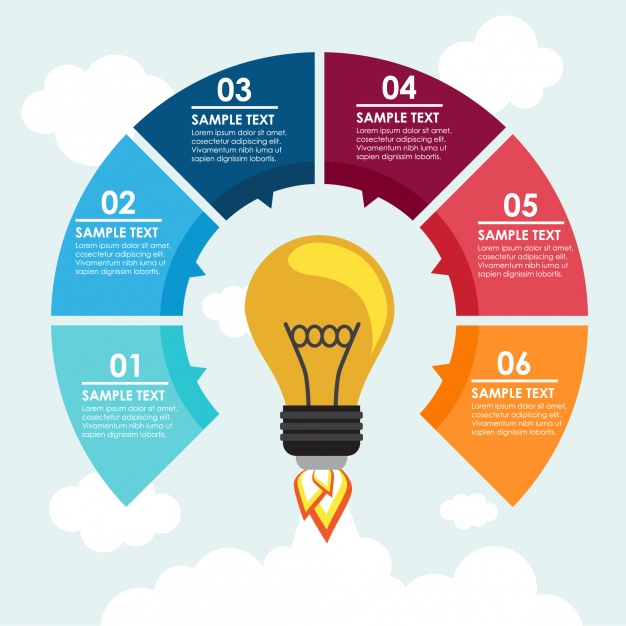 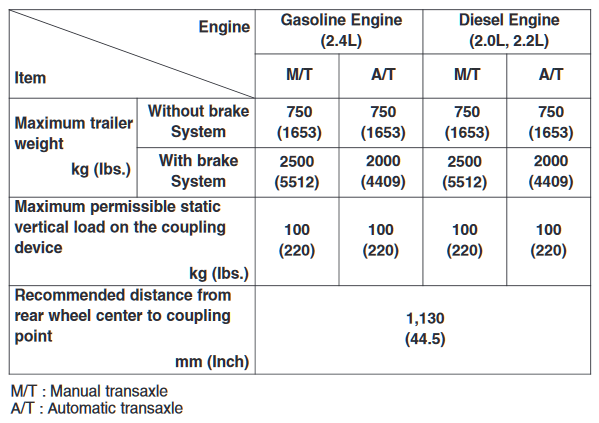 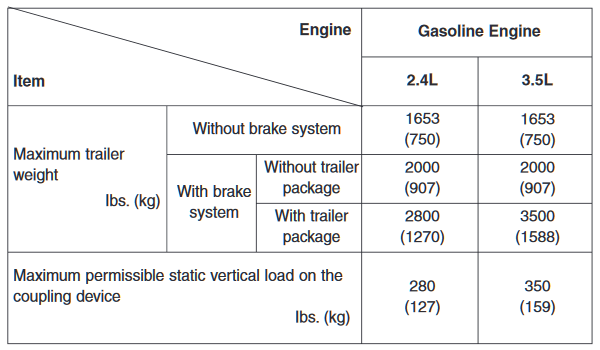 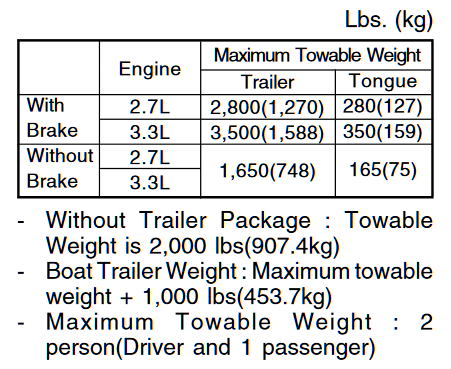 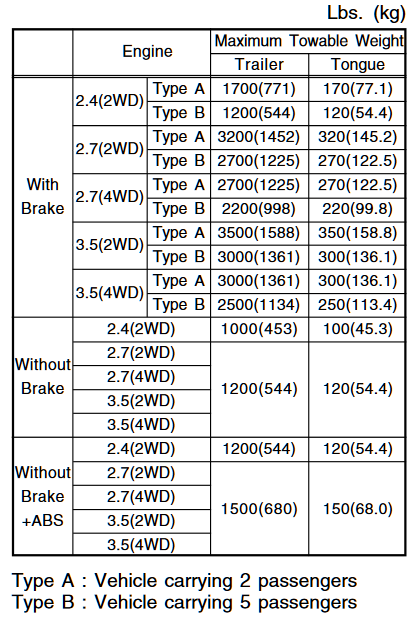 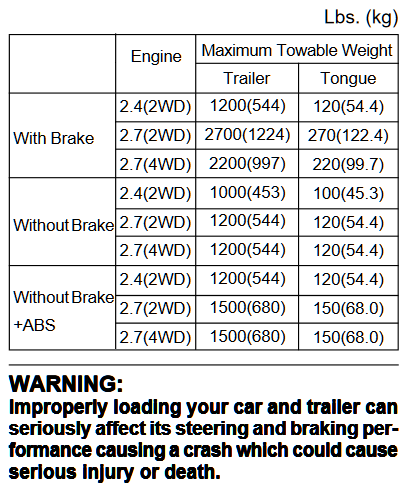