The Audi Q7 is thought of as a luxury SUV capable of transporting 6-7 passengers in style, but when it comes to anything tow related, noting is really ever mentioned. I was quite surprised to see that the Audi Q7's did indeed have a towing capacity for all model years made and some of the numbers were quite surprising!

I decided to include the SQ7s in this article as well because they are similar enough and I didn't think they needed a separate article (as of right now).

Overview of the Data For the Audi Q7/SQ7:

Engine Choices: For the Audi Q7's, the engine you had equipped was the major determining factor when it came to the numbers. The engine equipped was not always included in the chat data for all model years, but similar engines were used from 2007-2022 and is what had the greatest impact.

There were many different engine configuration over the years and some of them seemed similar and there was a little confusion when doing the research, so I wanted to clarify some main points to help others out there that may experience the same thing.

There were two main types of engines and these were gasoline and diesel options. These were labeled as the FSI/TFSI and then the TDI variations.

Trim Level Options: There were multiple trim level options for these vehicles and each trim level had different option for the exterior and interior of the vehicle and also had different engine options, in some cases, which affected the tow ratings. It is not important to know the trim level though to get your maximum trailer weight rating, all you needed was the model year and the engine that was equipped.

If you wanted to look into the different trim levels and see some of the options that were available for these vehicles, then you should take a look at the brochures, which were very helpful when doing my research. The brochures also gave a nice breakdown of the data and really helped to get an "overhead" view of the different options that were available for these vehicles.

I do want to point out that it was hard to find every single model year, but the most complete resource I found was available from auto-brochures.com.

Maximum Tow Capacity: The capacity numbers for the Audi Q7's throughout the life of the vehicle really stayed close in range, for the most part. In general, the tow capacity started at 1,650 pounds (for unbraked trailers) and went up to 6,600-7,700 pounds, depending on the model year.

For Audi Q7's made from 2008-2014, I only have one chart listed because they had identical specs for those model years and unnecessary to list multiple charts with the same data.

Some of the Audi Q7's will have a trailer operation mode that needs to be selected before you tow anything and the picture below is what I found in the owner's manual stating this.

Be sure to read all of the information in your Q7's owner's manual for a more comprehensive understanding of what Audi recommends when pulling a trailer.

It is important to note that the chart states that these weight capacities are suitable for pulling up grades as steep as 12%, so plan your trip accordingly! The maximum trailer tongue weight ratings are also specified, but I would have liked to see the GCWRs in the chart as well.

I think it is worth mentioning that the SQ7 was listed at the bottom row in the table and used a completely different engine that was available for the other models but shared the same rating as the 55 TFSI engine.

The 2017 model's chart looks a little different from later model years charts, but they had almost identical specs when you compare it to the 2019 models, the only difference being the tongue weight specification for models that had the 2.0L engine equipped. It was strange that I couldn't find any information related to the 2016 Q7's anywhere online and is why I don't have any data to share.

If I do find any information regarding the 2016 models, I will update the post.

For Audi Q7's made in 2015, the towing capacity numbers were slightly lower on the top end than later model years and ranged from 1,650 pounds (unbraked trailers) and went up to 6,600 pounds.

The specs for the 2015 models were not in a chart format but rather stated, as you can see by the image below.

When I was researching 2008-2014 Q7 model years, I noticed that the specs were the same for all years and is why there is only one chart shown for all of these years.

The three different tow ratings for the 2008-2014 models used the same requirements we saw for later model years, having the numbers reflecting unbraked trailer weights/braked trailer weights and whether you had a factory installed hitch or an aftermarket hitch instead. The same thing happened to me when looking for 2007 Q7 models as 2016 models, as I was unable to find any owner's manuals or data showing the tow specs.

Audi's website that I gathered the rest of the owner's manuals from only went back as far as 2008, so I could not access any previous model years from that resource.

What You Need to Know About Your Vehicle

There are a few different things you need to know about your vehicle in order to figure out how much weight you can pull behind your vehicle and really one of the main determining factors was what engine you had equipped, but there are other terminology or elements that you may come across that not everybody will be familiar with, so I wanted to explain what those couple of items were.

Like I mentioned many times in this article already, the type of engine that came equipped with your vehicle from the factory is the main determining factor in your maximum trailer weight rating.

We already know this, but how do we figure out what engine we have in our vehicle? I would say that a good majority of the people out there can probably pop the hood on their vehicle and look inside the engine Bay and find some sort of markings that indicate what engine they are looking at.

This may not always be the case, though, so you will need to find another way to identify your engine. I would recommend using the VIN of your vehicle and plug it into a VIN decoder in order to get this information.

This is probably the easiest way to go about it and it should give you enough detail about your vehicle, more specifically about the engine to figure out what your maximum trailer weight rating is.

If we look at the 2008-2015 models we can see that there were two maximum trailer weight rating specifications listed, one was for vehicles that had the factory installed hitch and then the other specification was for aftermarket hitches.

If we compare the number that were listed, we can see that the factory installed hitches were able to have a maximum weight rating of around 6,600 pounds but if you had an aftermarket hitch installed instead, then that weight was significantly reduced to around 5,500 pounds. That is a difference of nearly 1,100 pounds, which is a huge gap!

It is important to note that when doing my research, it seemed like all of the trim levels and models were able to have the optional trailer package installed and every model and trim level from every year had a package available to them.

On a side note, I do know that some model years also had an increased cooling capacity for the vehicles, which usually equates to a larger radiator and was part of the trailer tow package. I'm not sure if this was true for all model years, but I did see it mentioned on a couple of different model year vehicles. The brochures usually mention these details and is where I remember seeing this information.

You have seen me list two main specifications when it came to the maximum trailer weight rating and these were the unbraked and braked metrics. What does that mean though? Braked and unbraked is a term that applies to the trailer that you are pulling behind your vehicle and whether it has it's own brakes equipped that are independent of your vehicle's braking system.

Unbraked specifications are referring to trailers that do not have their own brakes installed and braked means that the trailer you are using has its own brakes, which will help you stop the vehicle and trailer sooner.

What About the 12% Incline?

There were specifications that were made as far as the maximum trailer weight figures and these were achievable as long as your trailer had brakes equipped and for travelling up grades that were no more than a 12% incline. This represents how steep the hill is and is a fairly common requirement for most vehicles by most manufacturers. 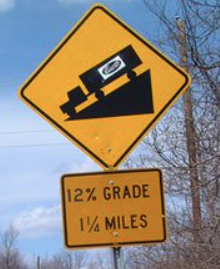 Steep hills will put even more stress on your vehicle, as will higher outside temperatures and running your air conditioner, so if you think you might encounter one of these situations you will have to prepare for it. This is usually done by reducing your trailer weight, if you are at the maximum stated limit. Reducing your speed and turning off the ac until the road flattens out or starts to descent are also other ways to help your vehicle out.

I was able to find this really short video that briefly describes an owner's experience pulling a mid-sized camper with a 2015 Q7 that was equipped with the 3.0L TDI engine. He also shows the additional equipment he used in his setup and it was really an informative video that I think a lot of people will find helpful.

How I Found My Information:

I used the owner's manuals to find all of the information I compiled but I could not post individual links to these manuals because they expired after a short period of time. So what you have to do if you want to look up the manual for your Q7's model year is: 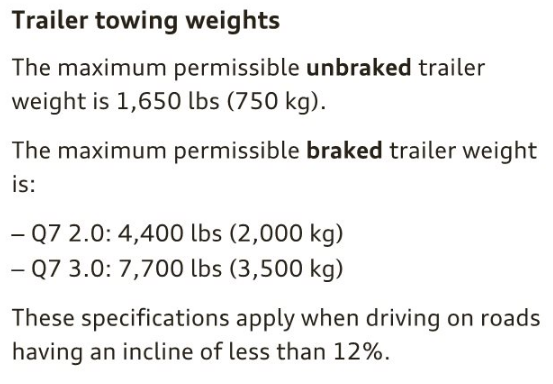 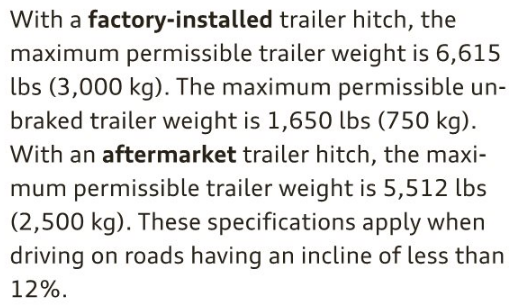