The Chevrolet Trailblazers were made from 2002-2009 and are making a comeback in 2021 but I decided to focus on towing capacities for the 2001-2009 models only in this post. I tried to break down all of the information I found in the owner's manuals and organized it the best way I thought possible.

Overview of the Data For the Chevy Trailblazer:

2WD VS 4WD: I did notice that there was a slight advantage for 2WD models when it came to the Trailblazer's capacity numbers of about 200 pounds, in most cases. This was true for most model years when I compared vehicles with the same engine equipped and the same axle ratios.

EXT Models: I thought it was important to note that the Chevy Trailblazer EXT models had a lower capacity than non-EXT models and it varied. I noticed a difference of 200-400 pounds when comparing the two models with similar setups.

Towing Capacity: Over the years, the Trailblazer's maximum weight capacities was quite substantial, having a minimum capacity of around 4,800 pounds on the lower end and 7,200 pounds on the higher end. Most models hovered around the 5,500-6,000 pound range in general though.

The 2007-2009 Chevy Trailblazers had the same specs when I compared them, so I just used one chart from '09 that represents all three model years.

Remember to read the owner's manual for your Chevy Trailblazer for other towing related information. I try to provide all of the "essential" info I find related to the capacities, but I recommend that you do extended research yourself.

From 2007-2009 Chevy Trailblazers had a towing capacity that ranged from 5,200 pounds and went up to 6,800 pounds, mainly depending on the engine and configuration.

The three engine choices were the 4.2L engine, the 5.3L engine and the SS models had the 6.0L engine equipped. Trailblazers equipped with the 4.2L engines had a slightly lower towing capacity range that started at 5,200 pounds and went up from there to 6,400 pounds maximum. If you had the 5.3L engine equipped, then you would have seen a slightly higher capacity of 6,100-6,800 pounds and the SS models had a range of 6,600-6,800 pounds, depending on if you had the 2WD or AWD configuration. The 2006 Chevy Trailblazers had a little bit different trailering chart than we saw with the 2007-2009 models because the EXT models numbers were also included in the charts.

The towing capacity for the 2006 Chevy Trailblazers ranged from 4,800 pounds and went all the way up to 6,800 pounds. If you look at the charts for the 2006 Trailblazers, you will notice that the EXT models had a lower weight capacity than the non EXT models that was roughly 400 pounds less, except on V8 models that had the 3.73 axle ratio. The SS models made in '06 had the same capacity of either 6,600 pounds (AWD) or 6,800 pounds (2WD). The chart for the '05 model Trailblazers had the L6 engine equipped for a lot of the models, even the EXT models and a V8 engine was offered only for the EXT models. No SS models were shown in the chart.

Again, I noticed that the EXT Trailblazers had a slightly lower capacity than the non-EXT models of about 300 pounds. If you had the V8 engine equipped, then the 4WD models also had lower tow numbers of around 200-500 pounds, compared to the 2WD models and was also dependent upon on the axle ratio. The 2004 Chevy Trailblazers had similar capacity specs to the '05 model years but some of the capacities were a little different, slightly less in most cases.

Now the EXT models that had the L6 engine equipped had a lower overall capacity than non-EXT models and was a difference of 200-300 pounds when comparing 2WD and 4WD models with the same axle ratios.

If you had the V8 engine equipped in your 2004 Trailblazer, then you would have had a slightly smaller capacity if you had a 4WD model, compared to the 2WD models that averaged around 200-500 pounds. Again, the 2003 model Trailblazers had slightly different ratings than the '04 and 05 models and is why I posted them in another separate category.

The towing capacity for the 2003 model year Chevy Trailblazers had a slightly higher 4,800-7,200 pound range, higher than any other model years in on this page.

For '03 Trailblazers, I still noticed that the EXT models had lower specs than the non-EXT models that were 400 pounds less when comparing similar 2WD/4WD models and similar axle ratios. On a side note, the charts I grabbed were a little fuzzy and was like that on the owner's manual I grabbed them from.

The chart for the 2002 Trailblazers were much simpler and did not mention the engine equipped but instead divided the tow numbers into 2WD and 4WD models. Helpful Resources For The Chevy Trailblazer:

Here is a convenient list for the owner's manuals I used for the Chevy Trailblazers made from 2001-2009. I really just gathered the towing charts from these manuals and used them to compare stats but there was other helpful information that I know you would find valuable. 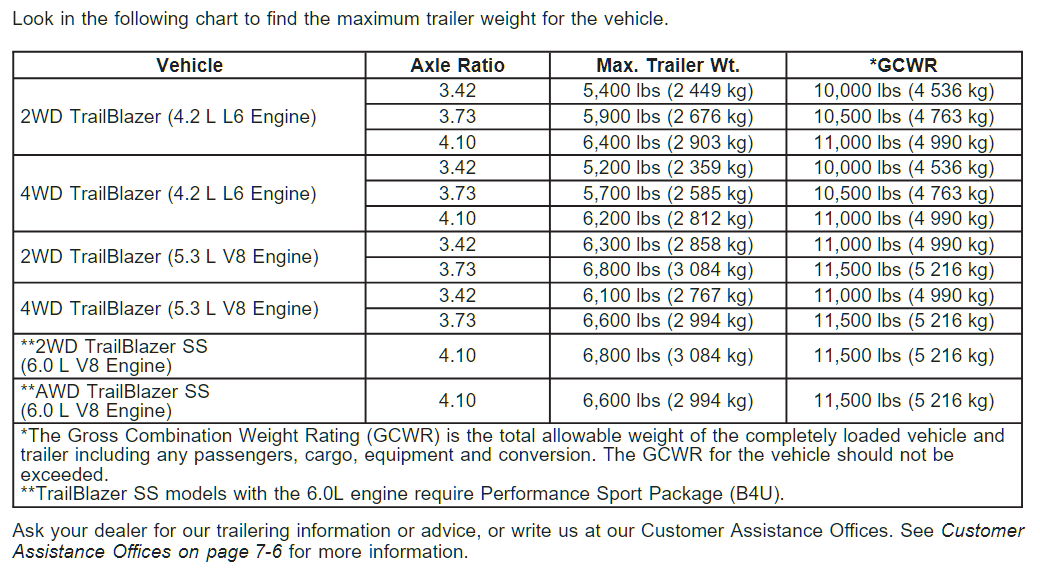 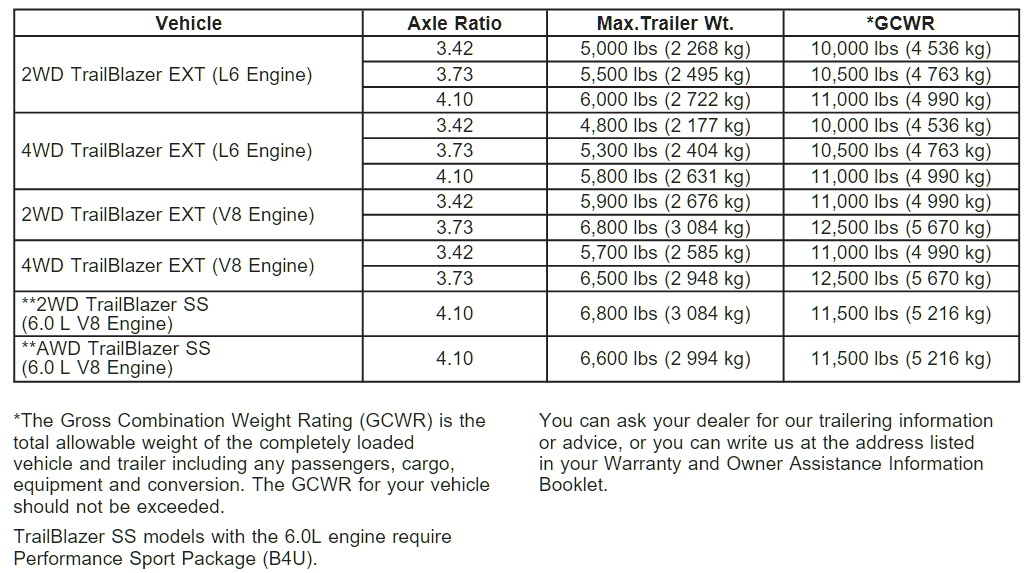 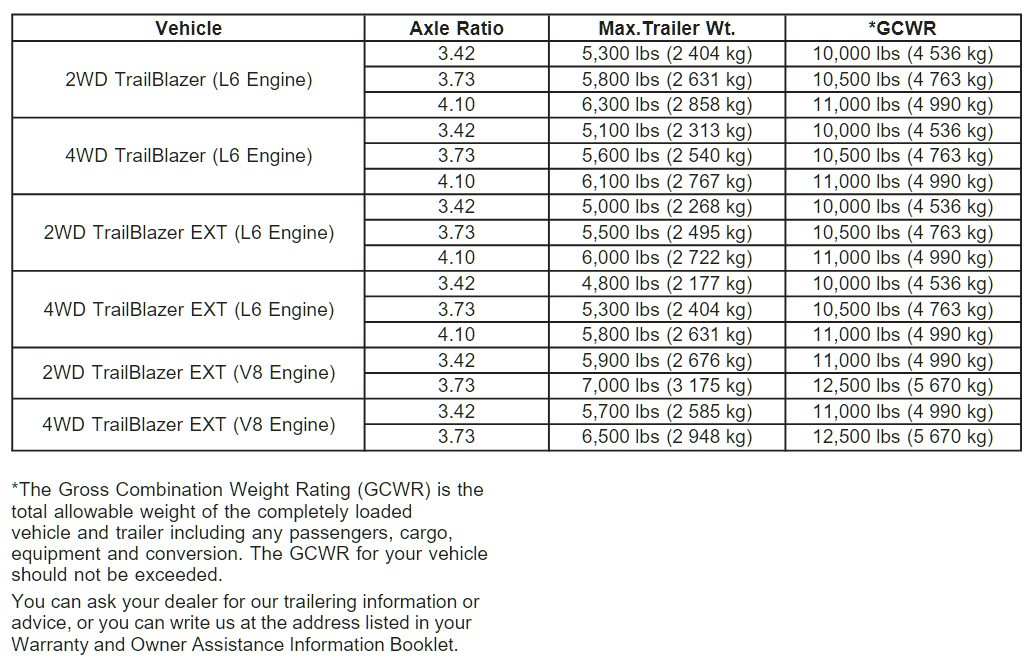 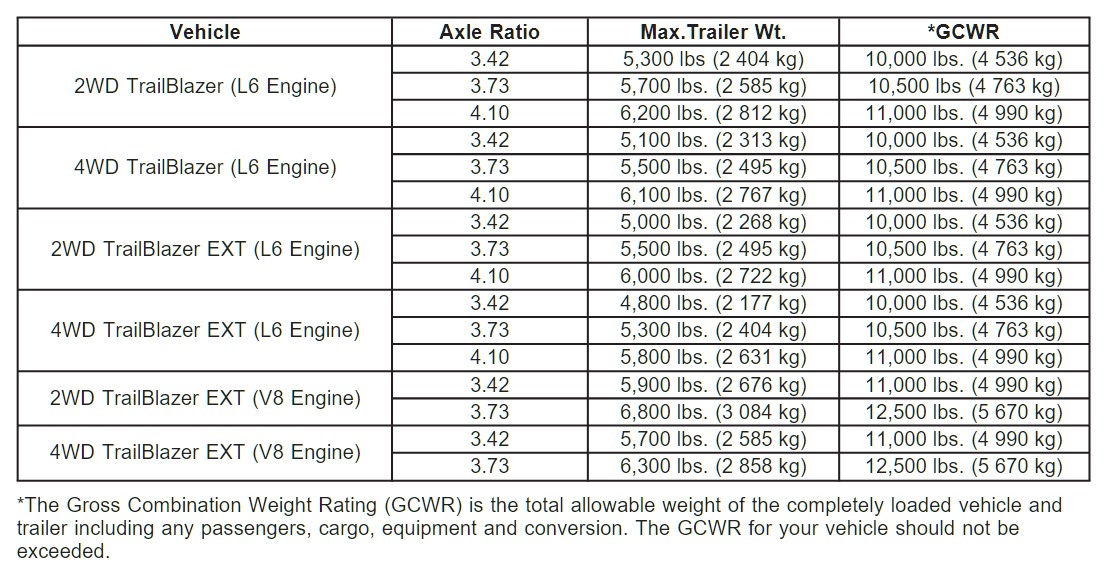 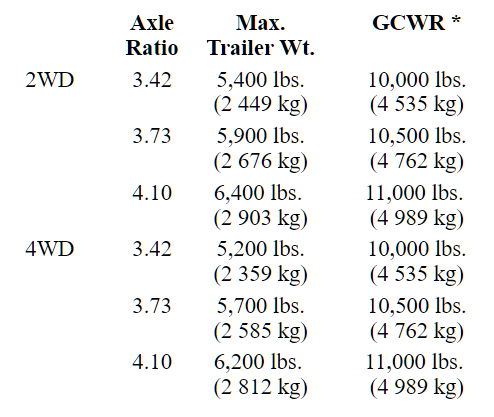