I have to admit, that I was never a fan of Chevy's Avalanche, no matter what model year and I always thought they looked bizarre. When I noticed that they actually had a towing capacity, I started doing a little more in depth research and found out that some of them are very capable! Here's what I found...

Overview of the Data For the Avalanche:

Engine Choices: Over the years, the Avalanche did not really have many engine options available and to be honest, after looking through the data, it did not seem to affect the weight ratings all that much.

Things like axle ratio and additional towing equipment that was installed on the vehicles had more of an impact than what engine was equipped.

Variations: There were a few different variations of the Avalanche's that affected the capacity numbers. Things like axle ratios and 2WD vs 4WD models made for smaller differences while things like having optional accessories installed and 1500 vs 2500 series made large impacts in the ratings.

Overall Capacity: The towing capacity for the Chevrolet Avalanche ranged from 4,900-12,000 pounds overall (2002-2013) and was determined by the engine that was equipped in your truck and whether you had the cooling system package installed.

Be sure to read the owner's manual for your specific model year Avalanche to get a full understanding of what Chevy recommends and what you can and shouldn't do.

The 2011 models had slightly different metrics for the 4WD models, 100 lbs. less but nothing significant as you can see in the two charts below.

The 2010-2013 models that were 2WD had a 100 pound advantage over 4WD models when comparing the metrics in the charts and if you had the K5L HD cooling package installed, then you had the highest capacity available, no matter if you had a 2WD or 4WD model.

The chart for the 2009 models was a bit more complex than later model years and the capacity was also a bit different too.

In order to decipher what your '09 truck's capacities are, you will need to use the RPO codes. If you had the K5L cooling package installed, like the chart states, (K5L RPO Code) then you will have the higher capacities. The 2008 Chevrolet Avalanche had a towing capacity of 7,000-8,200 lbs. and was higher, on average, than later model years, depending on a couple of factors.

The '08 models also came in 2WD and 4WD models, like other model years and the 2WD models had about a 200 pound advantage when it came to overall capacity numbers, when you compare similar specs.

The same differences were seen for the '07 models like a slightly higher capacity for 2WD models (100-200 lbs.), the same engines and the same axle ratios.

The '07 models were very similar in specs compared to the '08 models with slight differences and is why I decided to make a completely new section for the 2007 models.

I decided to put the 2006 and 2005 model years together because their specs were close, but posted separate charts, so you could see the differences for yourself.

I did notice that the axle ratios made quite a difference too for the 2004 model year trucks, having a difference of between 900-1,900 pounds in some instances so it would be worth noting that.

The 2003 models had close specs to the 2004 models, but many of the stated weight rating specs were different by a couple of hundred pounds, which prompted me to make an individual evaluation instead of a combined one.

The first year that these trucks debuted, it had different ratings than '03 models, even though a lot of the same engines, gear ratios and GCWR metrics were the same.

Yet again, the same similarities existed for the '02 models that I noticed throughout the life of the truck, where the axle ratios and 2WD vs 4WD models had minor to major differences in the trailer weight numbers. If we look at the charts for nearly every model year, we can see that certain engines had different axle ratios and you will need to figure out what the axle ratio of your truck is in order to get an accurate maximum trailer weight rating from the chart.

There are a couple of different ways you can go about doing this, but I recommend using the RPO code that GM supplies for your vehicle. Your vehicle will have a lot of different RPO codes on the label, which you can find on the driver side door pillar or door and sometimes in the glove compartment area.

After you have your RPO code, you'll have to decipher it in order to figure out what axle ratio came equipped with your truck from the factory.

Remember, this is assuming that the rear axle that is equipped on your truck currently has not been tampered with or replaced at any point in time.

There is a really great site that lists a ton of the RPO codes for the rear axles of GM vehicles and I recommend using this website or a similar one to decipher your specific code.

For 2013-2009 models, there were two maximum trailer weight ratings that were specified for a specific engine and these two weight ratings were dependent upon whether you had the K5L cooling package installed on your truck.

Unfortunately, I couldn't find any information on these packages or what was included in them. There were a couple of forum posts that talked about the possibility of an automatic transmission fluid cooler, but I could not verify this either, so you will have to do your own research to see what you can find.

A Note On Trailer Brakes

GM did have a requirement when it came to trailer weight and trailer brakes and as you can see from the screenshot below that I took from the owner's manual, if your trailer weighed 2,000 pounds or more, it needed to have its own braking system equipped that is separate from your vehicle's braking system.

What Resources Did I Use For This Article?

I decided to pull all of my data from the owner's manuals I found online, most of them which come directly from GM's website. There are a couple of owner's manuals that I could not find directly through GM's site, and instead I pulled them from a third party source that had the manual. 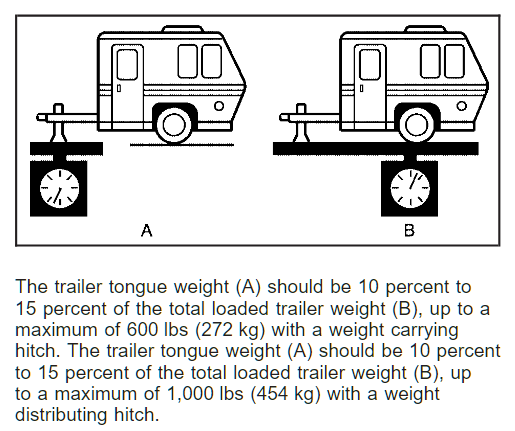 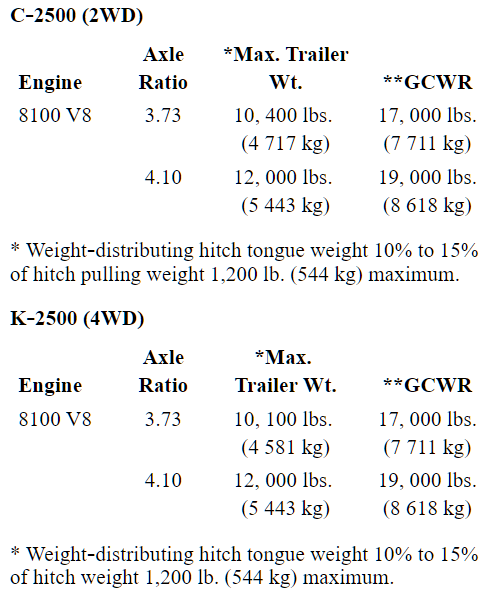