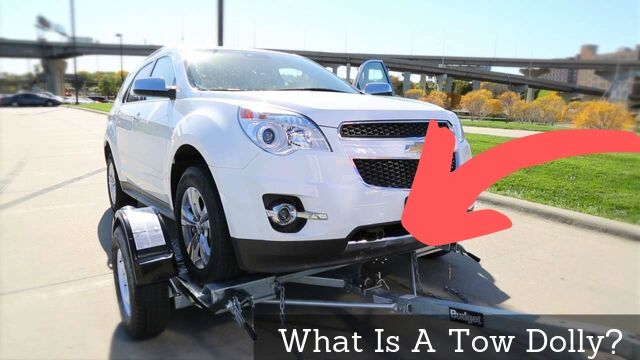 A tow dolly is a type of equipment designed for pulling cars and similar vehicles such that two of its wheels are secured in a small trailer, while the other two wheels are allowed to roll freely on the ground. Perhaps the best way to describe a tow dolly is the way it works as a half of a trailer, having just one axle with two wheels while also coming equipped with landing gear to load and unload a car.

Tow dollies, just like most trailer types, are designed to connect and be pulled by another vehicle.

A tow dolly is a form of semi-trailer, so you might see them referred to by that term as well. Unlike longer semi-trailers that can take anything from travel trailers to boats, the tow dolly is designed specifically for one purpose – pulling vehicles.

To accomplish this, most minimal dollies have a very minimal design made up of the coupling assembly, the landing gear, tow dolly tray, the axle and two wheels with tires.

The wheels of the car being towed are nestled into the tow dolly tray using the landing gear, and the tray has a shallow cage to hold the tires in place. The tow dolly is designed to take two wheels and nothing more, so you have a towing setup that adds minimal length and width to the two vehicles.

A tow dolly may also have a few more safety features like a brake system and lighting features, especially in regions where these are mandatory.

What Is A Tow Dolly Used For

A tow dolly is a popular choice for transporting vehicles when simplicity and space are a concern since unlike full on flatbed trailers, the tow dolly does not take up a lot of space compared to using a full trailer. Some owners also prefer the tow dolly for towing a variety of vehicles, since you will not need to do any modifications to the vehicle you plan to tow.

That last characteristic is particularly useful for vehicle recovery applications. A tow dolly will let you pull a disabled vehicle without the need to install tow hooks first, and it’s usually faster to secure a car to a tow dolly compared to the work of setting up the vehicle to ride a flatbed trailer.

The proper way to use a tow dolly is to secure the powered wheels of the vehicle being towed. That is, if you are pulling a front wheel drive car, you will usually put the two front wheels up on the tow dolly and tow the car with its front forward. If you need to tow a rear wheel drive vehicle, on the other hand, then you may need to unlink the drivetrain first.

Using a tow dolly in this way also solves one of the main issues with flat towing, or towing the vehicle with four wheels on the ground. Since you are not causing the powered wheels of the vehicle to turn as you pull it along the road, you are not subjecting the drivetrain and transmission to wear and tear.

What Are the Advantages of Using A Tow Dolly?

When it comes to transporting a car, the advantage of using a tow dolly over a flatbed trailer is immediately obvious to just about any garage owner – the huge space savings that the former gives you. It’s not just in the garage, too. A trailer bed is simply as long as it is regardless of whether you are towing a small hatchback or a mini SUV.

A tow dolly setup, on the other hand, gives you a lighter, more compact, and shorter arrangement that’s a lot easier to drive and bring around corners.

A smaller, lighter towing setup means more fuel savings for the owner. Perhaps more importantly, it gives you and your fellow drivers a significantly better driving experience, which is always a great thing to have on long trips through winding country roads.

Another reason for considering a tow dolly setup is the fact that you don’t need to modify the vehicle being towed. Four wheel or flat towing will require you to install a towing hook, pintle setup or some other type of coupler to the vehicle you plan to pull. With a tow dolly, there’s no need to bolt on or drill into the car you are transporting – you simply load the car on to the tow dolly tray, strap down the two wheels, and you’re ready.

There’s no additional cost, time and effort you need to put into every vehicle you plan to tow if you’re using a tow dolly. For towing a variety of different vehicles, the savings can add up, not to mention the time and effort you would have spent looking for and installing the necessary hardware specific to the car you need to tow.

Plus, the simplicity of a tow dolly setup also lends the system well to car recovery applications, too. As long as the car’s frame and two wheels are in roadworthy condition, you can pull a vehicle with a busted engine or transmission without major issues.

Speaking of transmission issues, the tow dolly solves one of the major issues with flat towing: the risk of damage to the drivetrain and transmission of the vehicle being towed. Flat towing a car in neutral will still likely put wear on the engine and the transmission, since many vehicles need the engine running in order to properly circulate the lubrication around.

Sure you can install a supplementary lubrication system on your car to help preserve the transmission, but that’s a rather costly solution, too. Tow dollies, on the other hand, locks the powered wheels in place while letting the other two wheels carry the load. With the two powered wheels off the grounds, there’s zero engine, drivetrain and transmission wear taken by the vehicle in transit.

What Are The Disadvantages of a Tow Dolly?

The main disadvantage of a tow dolly is perhaps the way it is limited to towing vehicles. If you want to transport boats, recreational off-road vehicles, golf carts, kayaks and other toys, then you are better off with a flatbed semi trailer or a full trailer. Of course, a tow dolly setup also means that you will not be pulling a camper or a covered trailer as well.

A tow dolly is also limited for light towing. Most dollies come with small wheels and lightweight axles, and you will find that many of them have a rather limited weight capacity. In general, you can expect to carry around 3,400 to 4,900 pounds with a tow dolly, which already excludes whole classes of larger vehicles.

Half ton and full ton pickup trucks, many crossover vehicles, SUVs and Vans simply exceed the maximum weight that can be safely carried by a tow dolly. Even full-sized sedans with older steel frames might be too heavy for a tow dolly, as well.

A tow dolly does take time and a little bit of work to set up, especially if you are doing it for the first time. Unlike flat towing where you can unlink the towed car and drive it around in a few minutes, the process of unstrapping the vehicle and easing it off the landing is a bit more complicated.

The work involved in loading the vehicle on to the tow dolly can take even a larger chunk of your time – you can expect to spend 15 minutes or so to do it until you have the process down.

Tow dollies are much easier to store compared to full trailers, but you still need to reserve a bit of ground space for them. A crowded campground may not have enough space for your dolly, which is an issue that you will not encounter with a flat tow setup. In many cases, though, you could simply stash the dolly under your RV to get it out of the way.

A tow dolly setup takes off unnecessary wear and tear on your engine and transmission, but since your car is still rolling along the road, there’s still a bit of extra wear on your tires. And since your car is riding on just two wheels as it is being towed, then the tires on those two wheels will wear out faster. You will need to rotate your tires every few hundred miles to keep the wear as even as possible if you are using a tow dolly with your car for a significant amount of time.

The tow dolly does a pretty decent job of protecting a vehicle from extra wear, but if you plan to transport a show car, then you’re likely better off lifting it off the ground entirely with a flatbed trailer. A tow dolly only has so much clearance off the ground, and you still run the risk of some bumper damage or undercarriage hits.

Not all vehicles can be safely towed, either – you may run the risk of voiding the repair warranty on your car. It’s always a good idea to check the car owner’s manual on whether it’s safe to tow on a dolly, or you can also get in touch with your car manufacturer to confirm.

What Is The Weight Of A Tow Dolly?

A tow dolly will usually weigh around 750 pounds, compared to the 1,000 to 3,600 pounds (or more) of a full flatbed trailer with two axles, four wheels, and brakes. Heavier tow dollies will usually come with heavy duty brake systems, and dollies in this range may weigh around 700 to 900 pounds. You may also find lightweight tow dollies that weigh 350 to 400 pounds or so, and that is including a brake system.

Tow dolly manufacturers will also specify a weight capacity for their product, and you can expect to tow around 3,500 to 4,900 pounds, which puts them around the Class II or Class III category equivalent. Tow dolly makers will also mention a curb weight capacity over the axle, which is the maximum weight you can safely put on the dolly axle.

What Vehicles Can Be Towed With A Tow Dolly?

A tow dolly can be used to tow most passenger cars, with a few considerations. First, you need to check if your vehicle is within the weight limit for your tow dolly.

In general, hatchbacks and passenger cars are perfect candidates for dolly towing, while trucks and SUVs are less so. Front wheel drive vehicles are straightforward enough to tow with a tow dolly and usually the best candidates.

Rear wheel drive vehicles, on the other hand, will need a bit more work – your options may include towing it backward, which is not recommended by many manufacturers. The alternative is to disconnect the driveshaft and tow it with the front wheels on the dolly, like you normally would.

Of course, a vehicle must have its axle, frame, wheels, and tires in road-worthy condition so that it can be towed with a tow dolly. The car that you plan to tow will ideally have a way to lock the steering wheel into a straight position. If your car does not come with this feature, then you will need to manually lock it in place with a steering wheel lock brace or a similar tool.

Vehicles being towed with a tow dolly should also not have passengers in it.

Keep in mind that some vehicles may come with warranties that might be voided if you tow them with a tow dolly. Always check with your manufacturer’s manual on the proper procedure for towing your car, and if anything is not specified in detail, get in touch with your dealer or manufacturer. Get a confirmation that you can tow your vehicle with a tow dolly without voiding their warranty, and it’s always best to get this in writing, if possible.