Home
|
Resources
|
All About Tow Bars|Everything You Need To Know… 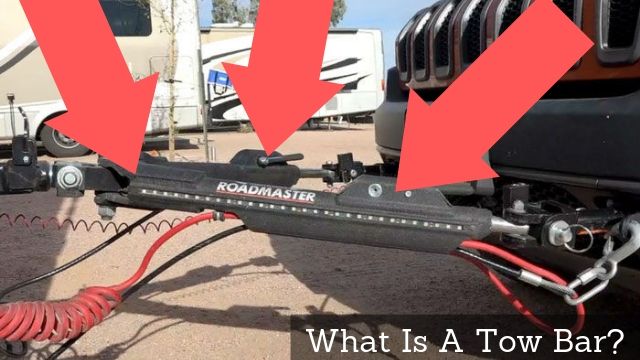 What Is A Tow Bar?

A tow bar is a tool that forms a crucial part of a flat towing setup, and most tow bars come in the form of a thick steel bar that attaches to the underside of the frame of a vehicle or RV doing the pulling.

The other end terminates in a ball mount or a similar accessory that links to the coupler or trailer receiver, completing the linking system. Since flat towing is a method where the towed trailer or car has all its wheels flat on the ground, using a tow bar offers a set of advantages compared to other towing systems.

What is a Tow Bar Used For?

Tow bars are used for pulling another vehicle, a trailer, or an RV. It’s a device that is attached to a vehicle’s frame to form half of a tow hitch system, and the other end can be used to pull a variety of loads. You can use a tow bar setup to pull another vehicle, and they are used in this way for recovery of disabled vehicles.

You can also use a tow bar to pull a flatbed trailer, and you can transport cars, boats, or even smaller heavy equipment in this way. A tow bar can also be used with enclosed trailers, and this setup is usually used for transporting smaller enclosures for livestock or horses.

A tow bar can also be used to pull a camper trailer or a small mobile home. You can also pull a motorhome or an RV using a tow bar setup using your truck, or do it in reverse – you can also install a tow bar to the base plate on your RV, and drive the latter to pull your truck instead.

A tow bar used for flat towing is one of the simpler setup you can get to start towing, and this in itself lends a few significant advantages to this system. One of the most attractive things about the simplicity of this setup is the initial cost. Using a tow bar to do a flat tow involves minimal modifications to the vehicle, and you do not need a major initial investment in towing dollies or trailers, either.

The appropriate tow bar, with mount or pintle hook, coupled with other necessities such as safety chains and tow lights, is almost everything you will need to pull a trailer. You can get a complete flat tow kit for your vehicle and it will likely have everything you need, and chances are you can set it up yourself.

Once you have a tow bar set up, then actual convenience of using it is also one of the strengths of this system. A tow bar setup is just about the fastest system for hitching and unhitching a vehicle since there is no need to off-load a trailer or lower the towed car off the tow dolly. You just need to unhook and you’re ready to drive.

Tow bars come in a wide variety of sizes, shapes and designs. The one thing they do have in common is the way they are installed on to the underside of the towing vehicle’s frame.

Other than that, a tow bar can range from something as simple as a flat tongue tow bar designed to go directly on the frame, to a more complex horizontal hitch tow bar designed for hauling heavier loads.

The image below shows what a standard tow bar looks like without any extra features or anything fancy and is more of a “universal” type of tow bar that can be used on a number of different vehicles.

You will have to find a place to mount these to the frame of the vehicle (or other recommended areas) and it can be a bit tedious and time consuming to do so. You might also want to look up having a tow bar bracket mounted to your vehicle first, to make the connection and setup easier and more reliable.

There are some tow bar bracket kits out there that are made for specific vehicles and these will fit much better with less customization (in many cases) than a “universal” type of tow bar mounted to the frame and these tend to be a little bit stronger too but add to the overall cost of the setup.

I have an example of a tow bar bracket kit (picture below) that is custom made to fit a 2010-2014 Jeep Wrangler and will mount right up (it’s supposed to anyways).

What Is a Tow Bar Hitch?

A tow bar hitch is a device that is securely attached directly to the rear frame of the vehicle. The hitch forms the frame to which the rest of the tow bar setup is attached to, so it’s crucial that they are perfectly matched to the vehicle and the towing load they are meant for, and then properly installed to the vehicle.

A tow bar hitch is also sometimes referred to as the trailer hitch, and the term is also commonly used to refer to the whole setup behind the vehicle – that is, including the frame bar, tow bar, securing pin, tow ball mount, tow ball, wiring and all that comes with it.

A tow bar hitch can also come as a receiver type hitch, and this type usually comes with a rectangular tube opening that can receive aftermarket ball mounts. This type is well suited for owners that want to switch between tow bars and other accessories such as cargo carriers and bike carrier racks.

Installing a tow bar hitch is usually an operation that does not require drilling new holes into the vehicle chassis. That said, it’s still a procedure that requires expertise, as well as attention to the proper torques for the nuts and bolts installed in the process.

Once installed, the tow bar hitch is usually hidden from view under the vehicle, with just the tow bar and tow ball mount sticking out to give access to the trailer coupler.

What Is the Towing Capacity of a Tow Bar?

Towing capacities for towing hitches are also classified under four or five weight classes as defined by the Society of Automotive Engineers (SAE). Class I tow bars are rated to pull up to 2,000 pounds, while Class II can safely pull up to 3,500 pounds. Both these classes are considered to be suited for light loads only.

It’s only when you get to Class III tow bar setups that you can begin to consider larger loads such as boat trailers or campers, as hitch setups in this class are rated for up to 5,000 pounds. Class IV setups can pull up to 10,000 pounds, easily double that of the Class III tow bars.

What About The Tow Bar Rating?

The tow bar rating is another term to describe the towing capacity of a tow bar. When a manual says that a tow bar is rated for a certain load, it’s a reference to the maximum weight that the tow bar can be used to pull – assuming that the rest of the tow bar setup and the vehicle is up for it.

What Can You Tow With a Tow Bar?

That said, there are loads that you should not tow with a tow bar setup. Tow bar setups are never meant to transport passengers in the camper or RV that is being pulled, for example. Many vehicles, when towed with all four wheels on the road, can also suffer damage to their transmission unless you can set them up with a supplementary lubrication system.

If the vehicle manual warns you against flat towing the vehicle, then you probably should not use a tow bar to transport it and instead look for another alternative like a tow dolly or a trailer.

What Is an Electric Tow Bar?

An electric tow bar is a form of retractable tow bar that you can deploy with the push of a button. Many of them can be activated using a button inside the trunk of the car, and some of them can even be deployed remotely. Some electric tow bars can also be flipped back to a hidden position using the same switch, as well.

What Is A Non Binding Tow Bar?

A non binding tow bar addresses, or at least tries to alleviate, one of the common complaints towing setup owners face at times – the binding that often happens between the trailer coupler and the tow bar.

A tow bar set up will often bind if the link is still under tension, and it will often require a few small adjustments by the driver (forward and backwards motions) to get the tow bar link aligned such that there is enough slack to unhitch it easily.

A non binding tow bar, on the other hand, comes with features that ensure that you can easily free up a tow bar link even if the link is still under tension. These features may involve specialized shapes for smoother movement, lubrication on the locking pins or the release mechanisms, or a combination of both.

What Is a Swan Neck Tow Bar?

What Is a Removable Tow Bar?

Unlike fixed drawbar hitches that are usually bolted in place, receiver tube hitches allow you to unhook the tow bar by simply removing a locking pin or nut and pulling the component out of the receiver tube.

What Is a Retractable Tow Bar?

What Is a Tow Bar Stabilizer?

A tow bar stabilizer is a device that helps stabilize the towing setup – that is, it helps cut down wobbling, swaying or pitching while the vehicle and the tow load is in motion.