I never really knew that the Volkswagen Tiguan’s existed until I saw one driving down the road a few days before writing this article.

They don't have the best towing capacity that I've seen for an SUV/CUV, but they did have just enough to be able to haul smaller items which would probably be more than enough for one or two people and the information is definitely worth something to somebody out there, I'm sure. Let's get into the article and see what how much these things can pull!

Overview of the Data For the VW Tiguan:

Engine Choices: There were no engine specs available for the Volkswagen Tiguan’s in the charts that I looked at, so that did not affect anything as far as the capacity numbers were concerned and for the most part, most model years used a 2.0 L engine (exclusively) anyways.

Configurations: Having an AWD or 2WD model also did not affect the overall towing numbers for any of the VW's model years and was not mentioned in any of the charts either.

Towing Capacity: Over the years, from 2012-2019 the Tiguan’s had an overall capacity range that started at around 1,500 lbs. and went all the way up to 2,200 lbs., for trailers that had a braking system installed.

Now the overall capacities were slightly lower for trailers that did not have a braking system equipped, ranging from 1,500 pounds, going up to 1,650 pounds.

The Gross Vehicle Weight Rating for the Volkswagen Tiguan's included the weight of the vehicle itself with all of its factory-installed equipment, plus a full tank of gasoline, the engine oil and coolant, all vehicle occupants (150 lbs/68 kg per seating position) and cargo.

Each model year had a little different weight specs listed for things like the GVWR and GCWR, so I recommend you find the manual for your specific Tiguan and check those numbers to get an accurate number.

The 2020-2018 model years for the Tiguan had pretty simple towing capacity specs listed, which was the same for both braked and unbraked trailers. They stated a rating of 1,500 lbs. for either type of trailer.

The braked trailer rating was a little lower than other model years I looked at and surprising because weight ratings usually increase over the years, in general. 2020-2018 model years were pretty easy to remember because there was only one weight limit specified, along with a 220 lb tongue weight rating, which is roughly 15% of the maximum weight rating and pretty standard when it comes to tongue weight specs in general. These specs did not apply to the 2015 models because models made in 2015 had their own stand-alone ratings, which I will explain next. I found it quite bizarre that certain specs were used for certain years and seemed to skip one or two years, like in this case. I thought it was worth mentioning though and I wanted to inform others out there, in an attempt to clarify.

The tongue weight allowance was a lot higher though, coming in at around at 500 pounds max.

One thing I also wanted to mention was that there really was no range when it came to the capacity numbers for the Tiguan‘s, instead it was an either/or type of option instead.

Resources For The Volkswagen Tiguan:

The owner's manuals for the Volkswagen Tiguan's were a little work to get ahold of and took some creativity to get the specs from them. For 2012 and newer models, you will have to go to Volkswagen's website and enter in your VIN number in order to look at the pdf manuals.

I did not post them here because the links that I used automatically expire in a short amount of time.

For model years 2011-2007, you will have to either order them online from VW's website or someplace else like Ebay, Amazon, etc. That is why I don't currently have the specs for these model years but I do plan on obtaining them and posting them at a later date. 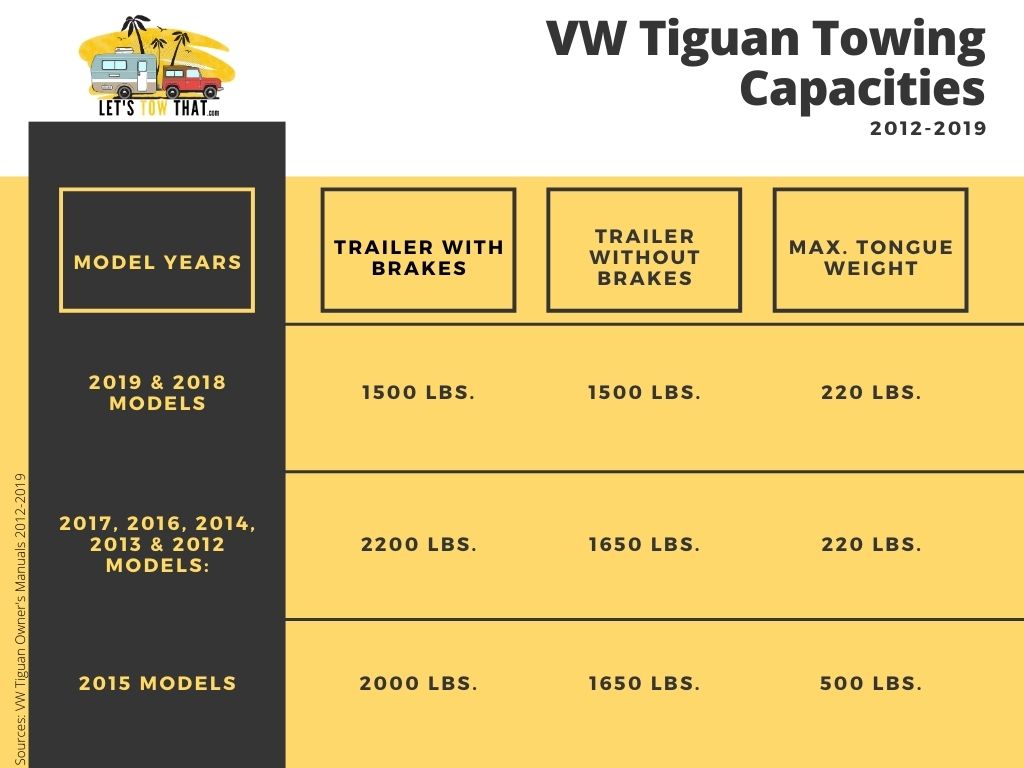