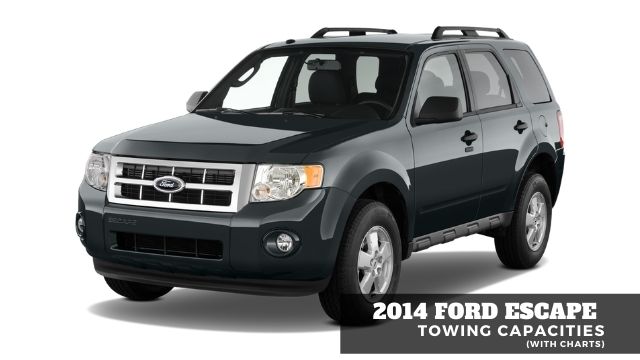 The towing capacity for the 2014 Ford Escape what's similar to other later model years and even the chart looked very similar except for the engine options which did tend to differ overtime, but we still saw a maximum trailer weight rating of 3,500 pounds for the 2014 model years if you had the right engine equipped along with the optional trailer package that was available for this engine.

In this article, I break down all the data I found and organized it in a much easier to read type of format, compared to where I found the information which was more jumbled and kind of all over the place.

Reading through your owners manual for your vehicle is probably the best thing you can do because it has all kinds of information about your vehicle. You will want to make sure you adhere to all of Fords requirements and recommendations.

Overall Capacity:The overall towing capacity for the 2014 Ford Escape ranged from 1,500-3,500 lbs and this was due to the Ford engine options that were available for these vehicles. With three different engine options, there were three maximum trailer weight ratings specified according to what engine you had equipped in your vehicle.

Capacity By Trim Levels: I decided to break down the data even further and compare the three different trim levels that were available, and below is a highlight of what I found. The S trim level was able to achieve a 1,500 pound rating and had the lowest specification in the chart. The SE and titanium trim level models had a higher rating that ranged from 2,000-3,500 pounds, the lower end being the capacity rating for models that did not have the trailer package and the higher end was for models that did have it installed.

By Engine Options: As I mentioned earlier, there were three different engine choices for these vehicles and this was between a 2.5 liter engine, a 1.6 liter engine and a 2.0 liter engine. The 2.5 liter engine was the largest engine when it came to overall cubic capacity, but it had the lowest amount of power compared to the other two EcoBoost engines that Ford made.

A fun fact about the 2014 models is that they shared a lot of the same specs as the 2013-2016 models with slight differences because they all utilized the same three engine options that were used for these vehicles. If you were to look at the 2013 Escape towing capacities, you would see the exact same specifications listed, and this would also be true for the 2015 model's trailer weight ratings and the 2016 model's ratings as well.

The towing chart for these SUVs looked very similar to the other later model years charts, for the most part and the 2014 charts were actually the exact same when I compared the data to the 2013 Escape charts and the 2015 model's charts too.

The axle ratios and gross combined weight rating metrics we're positioned in between the other two specifications, along with a few different notes below the chart area did talk a little bit about the towing equipment and the trailer package, along with trailer brakes.

What You Need To Know About Your SUV To Get Your Maximum Trailer Rating:

For the 2014 models, you only really needed to know what engine you had equipped in order to figure out what your maximum trailer weight rating was, as long as there was no additional weight in the vehicle that took away from your gross vehicle weight rating and gross combined weight rating specifications.

You find yourself in the position of not being able to identify the engine that you have equipped on your vehicle, which can happen to a lot of people unless you are very familiar with different engines of vehicles. Then I would suggest going another route and using the VIN of your vehicle to get the data you need.

All you would need to do would be to take your VIN and plug it into a VIN decoder, which can usually be found online and that will tell you all sorts of information about your vehicle, including what engine was equipped with your specific vehicle from the factory.

Earlier, I alluded to the fact that these vehicles did in fact come with a trailer tow package and I was able to find a little bit of information on this, via a table that was listed in the guide.

If we look at the data in the table, we can see that only three items were included in this package. This was a trailer hitch, a wiring harness which had a four pin connection for hooking up to your trailer lights. And then another accessory that is simply labeled as trailer sway control. So I'm not sure if this was a feature of the vehicle or an actual hitch of some sort. Hitch Receiver Weight Limits: On a side note, I was also able to find a hitch receiver weight capacity chart that doesn't really apply to these vehicles per se. But I went ahead and posted it anyway just because it was relevant information and I didn't want to skip over anything.

In short, some Ford vehicles have higher maximum trailer weight ratings as you can see some examples of this and other models of the below image and in order to achieve some of the highest ratings for these vehicles you needed to have a weight distributing hitch installed but again, this does not apply to the escape vehicles. 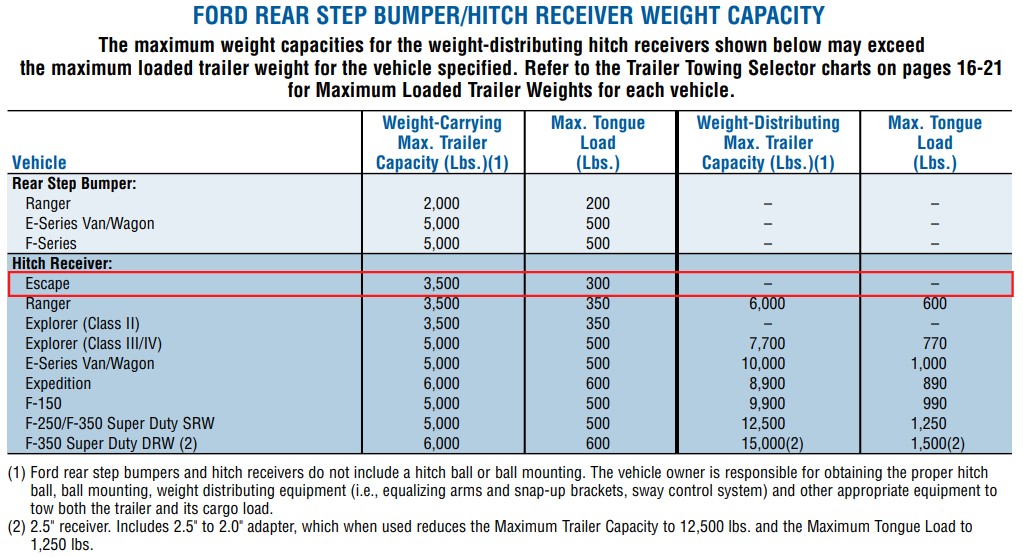 Trailer Brakes: Trailer brakes are required if you plan on pulling weight behind your vehicle that weigh 1,500 lbs or more, and this is a requirement by Ford. But keep in mind that some states will have their own requirements as far as trailer brakes and trailer weight ratings go. So you will need to check to see what those are to be sure you comply with your local laws as well. GCWR, GVWR & GAWRs: The gross combined weight ratings were provided in the charts so if you happen to be looking for those figures you can find them very easily just by looking at the chart for the trailer weight ratings.

If you happen to be looking for the gross vehicle weight rating specifications or the gross axle weight ratings, you may have noticed that they were not specified in the chart but are actually specified on the certification label instead which can be found on the vehicle itself and more specifically on the driver side door pillar of your vehicle. This label will look very similar to the label I have posted above and towards the top of this label is where you will find these three specifications listed and usually these will be listed in both pounds and kilograms.

Axle Code: I also wanted to point out that at the bottom of the certification label, you also have an axle code that can be used to figure out what axle ratio the rear axle of your vehicle used. If you're just trying to figure out the maximum trailer weight rating of your SUV, then you will not need to know the axle ratio, as other variables were provided that will dictate what your maximum trailer weight rating was. I just wanted to simply relay this information to those of you out there that may need to look this data up a little bit later on for whatever reason.

Helpful Resources I Used For My Research:

I was honestly quite surprised to find out that all of the research for these vehicles only came from three different resources and on top of that, most of the information I grabbed came only from one of these three resources!

The guide is what really provided the bulk majority of the information I needed and is where I grabbed most of the images you see posted in the article as well. The brochure and owners manuals were also helpful when it came to other types of information that I was looking for and I definitely recommend that you check those out as well.