Lexus is known for making luxury vehicles, and the RX 350's and RX 350L's are no exception. After doing a little bit of research on these vehicles I was surprised to see if they had any towing capacity whatsoever, due to the fact that they are really just a luxury SUV designed to carry people in style.

After doing a bit of research, I was able to find that these are pretty capable and can actually haul a decent amount of weight, if needed. This makes them much more versatile for those of you out there that not only want to travel and style, but want to pull something behind you while you do so. Let's take a look at what they can haul.

Overview of the Data For the RX 350s:

Engine Choices: There we're no engines listed in the owner's manuals for the specific Vehicles, so I assume the same engine was used over the years, or it didn't really matter what engine was equipped, as the specs were identical. So the engine equipped really did not affect the capacity numbers at all, according to the charts I found.

Towing Capacity: The towing capacity numbers for these SUVs really didn't change over the years, in fact it was exactly the same for models made from 2012 and up. The only difference is I saw were for model years that were made from 2007 to 2015, which had an additional weight spec for models that did not have a tow package installed.

Models made in 2016 and newer did not have any weight rating listed for models that did not have one of these packages installed, in fact, towing was not advised.

Many of the RX 350 trailer weight rating specs are identical for more than one model year, so I grew up these model years together and displayed one chart the metrics were exactly the same, so I didn't want to list multiple charts that had the same information.

I always recommend that you read your owner's manual in order to get a complete rundown on what the manufacturer recommends for your specific vehicle, as there is other related information let me know when you get up there will be useful to most people.

Lexus did state that if your vehicle did not have a tow package equipped, then they do not recommend towing with the vehicle, as highlighted below in the image I grab from the owner's manual. 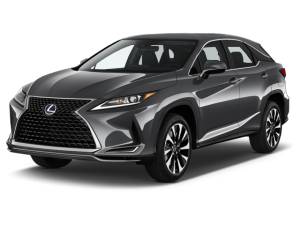 The 1,000-pound capacity was for trailers that did not have their own independent braking system installed. I do want to know that some of the gross combined weight rating specs were different, and I listed those below as well, for those of you out there that want to do the more precise calculations. 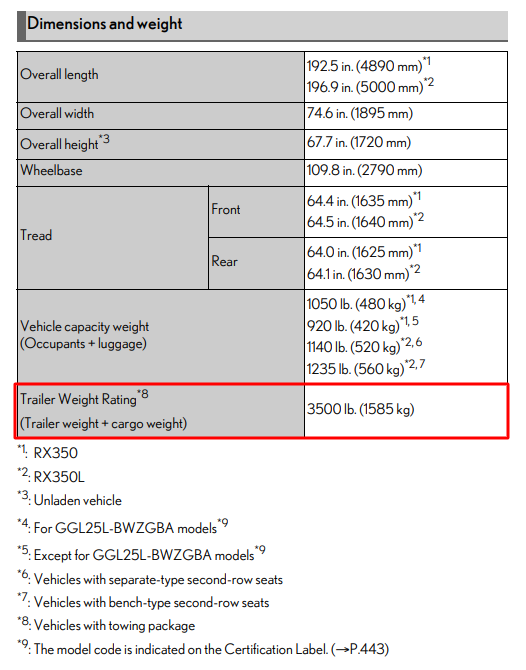 Models With No Tow Package 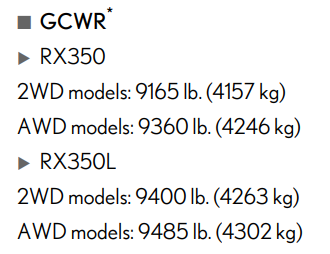 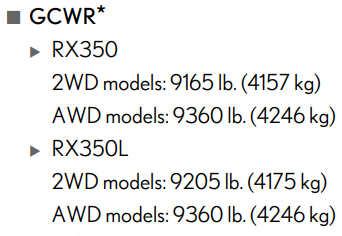 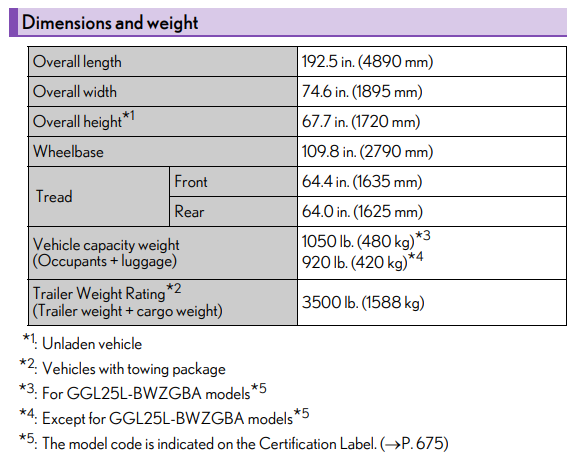 Models With No Tow Package

For 2015-2012 models, the towing capacity was still the same as the later model years, ranging from 1,000 - 3,500 lbs. except for another figure that was listed for vehicles without a tow package installed.

If you did not have a tow package installed on your vehicle, the capacity range was between 1,000-2,000 lbs. 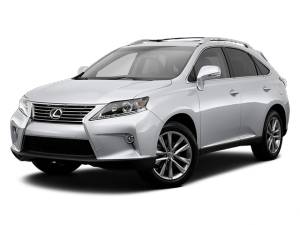 The smallest capacity number was still reserved for unbraked trailers, and it was really worth it to have the tow package installed on the vehicle as it gave you almost double the overall capacity when compared with models that did not have one of these packages installed.

The main difference was that the 1,000 pound rating for unbraked trailers was not found anywhere in the owner's manuals, that I could find anyway. 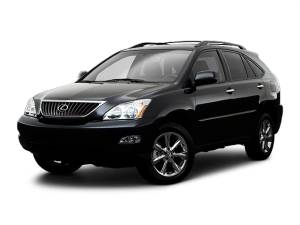 I also was not able to find any of the gross combined weight rating specs for any of the 2011 - 2007 models anywhere, so I could not include those in the chart below. I assume these were listed on the safety certification label on the inside of the driver's door jamb, but I'm not sure and will investigate further and post my findings here when I find out. 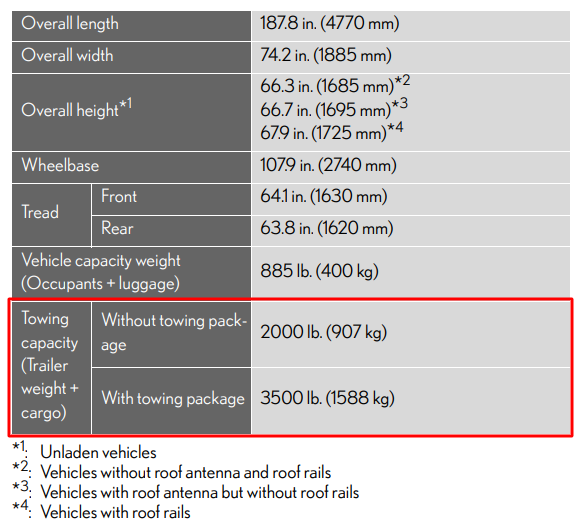 I was not able to find anything stating the unbraked trailer weight ratings for the 2011-2007 models in the manuals.

Every model year vehicle stated two different capacity specs, depending on whether you had a tow package installed on your RX 350 or RX 350L. I was not able to find any information in the owner's manuals that state what the differences were or how you do about determining whether your vehicle had one of these packages equipped from the factory.

I was able to find what certain model years called the "towing prep package" and is what the image below indicates for a 2021 model. I was able to find many of the brochures for the RX350's by searching for "2021 RX 350 brochure". All you have to do is change the date for your specific model year and search their brochure for what's included in the package.

For the 2021 models, all that was included is a heavy-duty radiator, an engine cooler and a transmission cooler, which is pretty typical for most vehicles as the most important aspect when it comes to Towing is the ability to cool down all of your fluids to prevent the vehicle's systems from overheating and causing damage.

I was able to find the assumed weight ratings that Lexus recommends when stating the trailer weight rating specs, but only for model years 2012 and newer. The image below illustrates the assumed base vehicle weight and includes:

Usually the manufacturer will state a figure for the passenger weight, but in this case they did not state how much assumed weight the driver and passenger are but in most cases they usually figure 150 lb per person, which would equate to 300 lb total for one driver and one passenger.

What this means when it comes to towing is that if you have more passengers, you will have to deduct the additional weight of those passengers from the maximum weight rating in the charts. 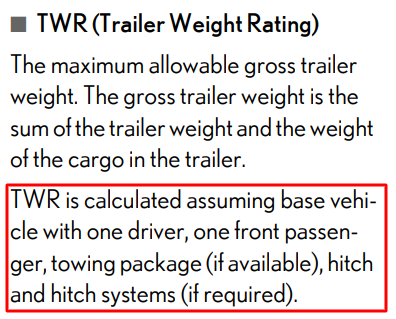 The model years above that showed the same towing capacity numbers in the chart sometimes varied when it came to the vehicle's listed weight capacity, which doesn't affect the tow numbers that much, except when you consider the tongue weight of the trailer itself, which is supposed to be included in the vehicle weight capacity calculation.

It did not differ by much, but it is important to note that some model years had less capacity weight than other model years, and you will have to consider that when it comes to calculating your trailer tongue weight and how that will affect the weight of your passengers and cargo in the vehicle as well.

For model years that were made in 2016 and newer, there were different gross combined weight ratings (depending on the model year that you had) that will differ from the towing charts that are posted for vehicles made between specific model years.

The overall maximum trailer weight ratings will apply for all of the model years listed, but some of the gross combined weight rating specs may be different, which I posted to make the calculations easier.

I was not able to find the gross combined weight rating specifications for model years 2007 - 2011, as they were not posted in the owner's manuals, like the other model years were.

All of the information I gathered for this article what's through the owner's manuals did I found directly through Lexus' website.

I wanted to go ahead and link to each individual manual so that it makes it more convenient for those of you out there that want to do your own research or maybe even take a look at some of the other related information that you can find in these manuals.