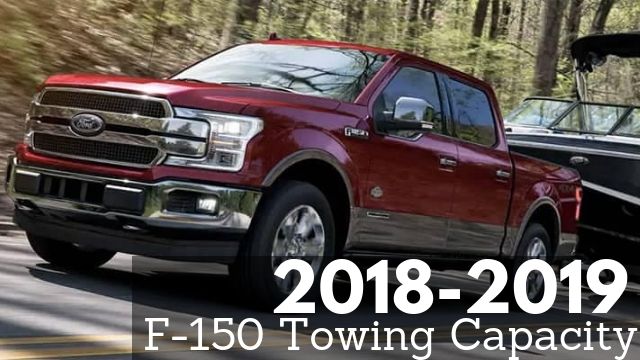 One of the most popular trucks out there nowadays is the Ford F-150 and a lot of people have one main question and that is what the towing capacity is. It would seem so obvious and easy to look up…

For 2018-2019 there are a lot of different sub models, engine packages, additional towing packages, etc. that can be found on a F-150 which makes the question a bit blurred. Throw in the different years that they made the truck and you have a ton of information that is mind numbing to look through.

I decided to sift through some of the information out there and tried to put together the most comprehensive guide on the towing capacity of the 2018-2019 Ford F-150s to answer most people’s questions. Hope it is useful to some out there.

Remember, the figures given are the MAXIMUM amount recommended by Ford.

Towing Specs Based On Engine Configuration:

*** There was another engine that was used but detailed specifications were not stated for it and that was the 3.5L ECOBOOST H.O. V6 engine.

2WD vs 4WD Differences I Noticed:

There was not a significant different between the 2wd models and the 4wd models in any of the engine configurations that I noticed when comparing similar wheel base distances.

There were only small differences between the two of 100 – 200 lbs. in most cases and the 2wd models usually had the higher towing capacity numbers.

I wanted to mention that these specs I have given are for reference purposes only and other variables go into the overall calculations when trying to figure out maximum capacity.

A Look At Available Trim Options For Specific Engine Configurations:

It is important to note that some trim options will not be available with all of the engine configurations listed, so I wanted to make a chart that shows which trim options are available for which engine to give you a better idea of what to expect.

The towing packages for the 2018-2019 F-150s are the pretty standard Ford Towing Packages listed below. There is the standard versions in the first two columns (F-150 and the F-150 Raptor) and then the upgraded options after that, represented by the 53A, 53B and the 53C packages.

(1): Max GCWR/Max tow achieved on SuperCrew® when equipped with 20″ wheels. These trucks will also come equipped with max springs, steering gear and upgraded stabilizer bar. (2): Requires 3.5L EcoBoost® engine. (3): Not included with 3.3L engine. (4): EcoBoost engines only. (5): Not included on XL 100A.

Now we know that the 2018-2019 F-150s towing capacity is largely dependent upon the axle ratio but how do you know what axle you have?

That is easy, just look at the sticker on the inside of your driver’s side door jamb (Truck Safety Compliance Certification Label) and you will see a section that states “AXLE” and below that will be numbers or a mix of letters and numbers.

Resources Used: Like I stated, there were two main Ford pdfs that I used to gather data and compile information and these were: the 2019 brochure and the 2018 brochure.