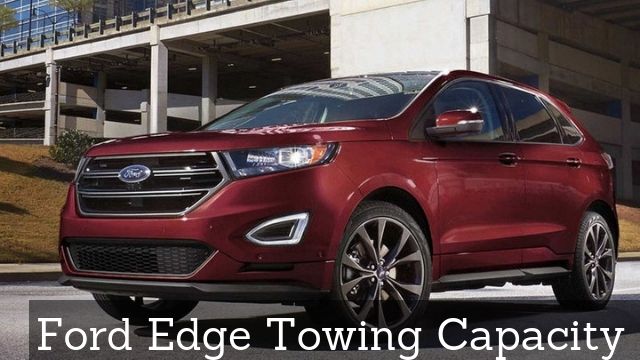 The Ford Edge is a mid-sized SUV, but more of a crossover than anything else and has a pretty decent towing capacity, considering it is smaller than some of the larger SUV’s Ford makes, like the Expedition and Explorer.

This article is going to give you an overview of the trailer weight limits, starting from 2007, going all the way to the present year. This will be a regularly updated post and hopefully helpful to people out there who are want a better understanding of how to determine their SUVs limits.

Overview of the Data For the Edge:

Each engine had different specs for each year (some were the same) so you really have to take a look at the tables to get a better idea of what model and axle configuration you have to get more solid numbers.

What Decreased Capacity: There were a couple of things that reduced the capacity of the Edge's that was stated in the footnotes on some of the charts. These were limited to the Sport Models and 20" and/or 22" tires, so keep an eye out for that.

Towing Capacity Summarized: The overall towing capacity for the Edge's made from 2007-2020 ranged from 1,500 lbs.-3,500 lbs, depending on the year, engine equipped and the axle configuration. Some models did require a tow package to achieve the higher specs in the charts.

In order to achieve the higher 3,500 lb. rating for these model years, you will need Ford's 53G tow package, which does not seem to be standard except for the ST submodels with the 2.7l engine equipped. The 2019 models had two different engine configurations that you could choose from and these were both EcoBoost engines with either a four cylinder, 2.0L option or a six cylinder, 2.7L engine. The 2017-2018 models had similar capacity numbers and similar engines/axle configurations, so the data in the table is the same for both years. There were three engines offered for the Edge in 2016, as shown in the below table. All of the models seemed to be listed as having optional FWD or AWD configurations.

The 2014 Edge was the last year that the lower 1,500 lb. capacity was offered standard, and it then rose to 2,000 lbs. for the next 4 years. The axle configurations were a little different from the specs for the 2015, so pay attention to that when comparing.

The average towing capacities ranged from 1,500 lbs.-3,500 lbs. for Edge’s that were made in 2014 and note that you may need to have an additional tow package installed for the higher capacity. Pay attention to the Engine options and the axle configurations as they are a little different from the newer models.

The data for years 2007-2011 was a little bit different, as the graph below illustrates and engine configurations were not part of the listed capacity formula. There were two different classes listed in the tables and was labeled as a light-duty and medium-duty model.

The towing capacity ranged from 2,000-3,500 lbs. for Edge's that were made from 2007-2011. Some models did need a tow package to be installed to reach the higher capacities and some models that had 22″ wheels showed a decrease in max. capacity.

On all of the charts I found and posted, you will have to know what type of engine you have in order to get the correct specs for your model. This is pretty easy to do if you are unfamiliar with your SUV, or just cars in general. Here's the easiest way I can think of getting that crucial information...

1. The first step is to locate your VIN number which can be found in many places like your registration card/paper, on the driver's side dash (looking from the outside of the windshield) and on your Edge's Certificate/Safety label, which is located on the driver's side door jamb (with the door open).

2. The next step is to use a VIN decoder like drivingtests.org (my favorite) and type in your VIN into the search box and press enter. 3. This will bring up all kinds of useful information about your Edge and the two main items for figuring out the maximum trailer weight will be right up at the top: the engine and whether it is an AWD or FWD model. If you have a sport model (which may decrease weight rating), then it will indicate this in the section labeled "Series" in the below image. In some of the earlier model year charts (2011-2007), there are different towing specs that state class I or class II, which is basically just referring to the hitch that is installed on the vehicle.

Resources For The Ford Edge:

Below is a list of the towing guides that are published by Ford that I used to gather all of the information for this article. They may come in handy for others out there and thought it was worth posting.