The 2009 Honda Pilots were built a lot like the other model years and in fact, shared a lot of the same data when it came to overall towing capacity, overall power and just about everything else.

You were able to achieve a maximum trailer weight rating of up to 4,500 pounds, if you had the right model, with the correct options, but it is also important to note that in certain circumstances you had no capacity whatsoever, so you need to know what these factors were that contributed to such a wide range in the numbers.

Always read through your owner's manual to familiarize yourself with your vehicle and to make sure you adhere to Honda's recommendations when it comes to towing or anything else regarding your vehicle.

Engine Options: There were no engine options available, in fact there was only one option that these SUVs came equipped with and that was a 3.5 L (V6) engine. This made the charts very simple and easy to read, which is a bonus for most of us out there.

Trim Levels: Four different trim levels were offered for these model year SUVs, but the trim level did not affect the maximum trailer weight ratings at all, other factors determined these weight ratings.

Assumed Weight: The charts did list a weight capacity for each occupant and this was the assumed weight, which was 150 pounds per occupant plus an additional 15 pounds of luggage per occupant, giving you a grand total of 165 pounds per occupant. If your occupants weighed more or less than that specified weight, then you would have to figure the difference.

The chart for the 2009 Honda Pilots were divided up into two different charts, like most other model years and these were dividing the models up by 2-wheel drive and 4-wheel drive configurations.

You can also see that Honda listed the number of occupants on the left-hand side of the chart and the more occupants you had in the vehicle, the less trailer weight you were able to pull behind you, which makes sense and it makes figuring out your maximum load calculations a lot easier.

On the right-hand side of the charts, we can see that there is also the maximum tongue load weight ratings listed, which also corresponds to the number of occupants in the vehicle. If you look at the screenshot below, you can see that Honda specifies that 5-10% of the trailer's total weight should be on the hitch of your vehicle if you are pulling a boat trailer behind you and that percentage is increased to 8-15% for all other types of trailers. 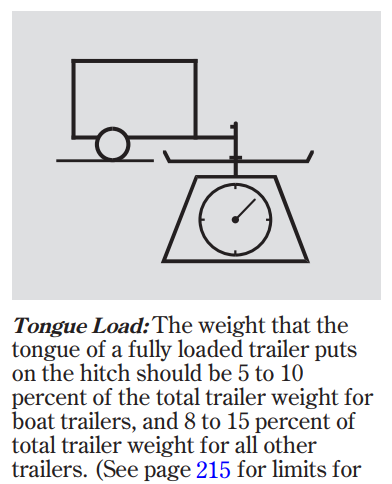 I was also able to find a note in the owner's manual that talks about trailer brakes and it is listed as the same specification for all model year Pilots, which Honda requires that your trailer have brakes if it weighs more than 1,000 pounds.

There were four different trim levels available for these 2009 SUVs, which were listed in the brochure (that I linked to at the bottom of this article) and these were listed as the: LX, EX, EX-L and Touring models.

It did not matter what trim level you had equipped on your vehicle, as far as the maximum trailer weight ratings were concerned, as the trim level had no effect whatsoever on the figures.

Like nearly all of the other model year Honda Pilots that I have researched, they also included the gross vehicle weight rating, gross axle weight rating and gross combined weight rating figures in the owner's manual, which makes find any information a whole lot easier if you have to make more complex load calculations. I do want to point out that there was a note that stated that for every 1,000 feet of elevation gain, you must reduce the gross combined weight rating by 2%.

For example, if you were traveling to an area that was 5,000 feet in elevation, then you would have to deduct 10% of your overall gross combined weight rating to meet the criteria. There were a couple of other notes I found in the owner's manual that I thought were worthy of mentioning and the first one talks a little bit about pulling your trailer off road and if you are planning on doing so, then you will have to substantially reduce the maximum trailer weight ratings down to 1,000 lbs., among other things.

The second tidbit of information talks a little bit about how using a weight distributing hitch is not recommended for the 2009 Pilots, which is pretty standard for most model years, although I know they can be used on some model year Pilots. 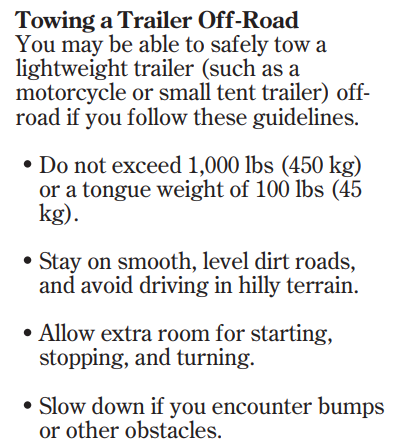 I was also able to find some information from the 2009 brochure there was available online, and I went ahead and link to that as well.