Honda passports are a pretty popular SUV and I was quite surprised at the towing capacities I found attached to the vehicles. They actually have enough capacity, depending on the model year and what additional accessories you have installed to tow smaller campers, boats and other lighter, smaller setups.

This was a fairly simple article for me to research and write and I was quite surprised on a couple of the tow specs that I found and the fact that there was a long span of time in between the second-generation and third-generation models, where they were not being made. Let's dive into it!

Overview of the Data For the Make/Model:

Engine Choices: The engine choices did not affect all models for these SUVs, as far as overall capacity was concerned and it only was applicable to models that were made from 1994-1996 when you had the choice of either a 2.6 L engine or a 3.2 L engine.

There were other metrics that affected numbers instead like additional equipment that you had installed on the vehicle, whether you had an all-wheel drive or two wheel drive model, etc.

In fact, the tow capacities were the same for either type of configuration if you did not have an automatic transmission fluid cooler installed. You would only get those higher ratings if you had the ATF cooler installed, which only was available on the all-wheel drive models anyways.

The model year and optional accessories like an ATF cooler or an upgraded hitch were the two main elements that gave the Passport's the higher capacity ratings.

Always refer to the owner's manuals if you are unsure about anything else I don't have listed in this post. They are easy to navigate and have tons of useful information.

There is a large gap in the model years from 2003-2018 because they were not made between these years, so no data was available.

The 2019 and 2020 Honda Passport’s had a maximum trailer weight rating range of 2,750 lbs. and went all the way up to 5,000 lbs., depending on whether or not you had an all-wheel drive model or a two-wheel drive model.

If you did have an all-wheel drive model, then the weight capacities would still be different, depending on whether or not you had an automatic transmission fluid cooler installed. Note that I have three different charts listed below, the first one showing the maximum weight specs, the second one shows the tongue load weights and the third chart shows important information regarding gross combined vehicle weight, axle weights and gross vehicle weights for the 2019 and 2020 models. I found this helpful image in the literature and it lays out what the different weight terminology refers to. This is a helpful graphic for people who are unfamiliar with tow terms and really clarifies the definitions and what you need to consider. 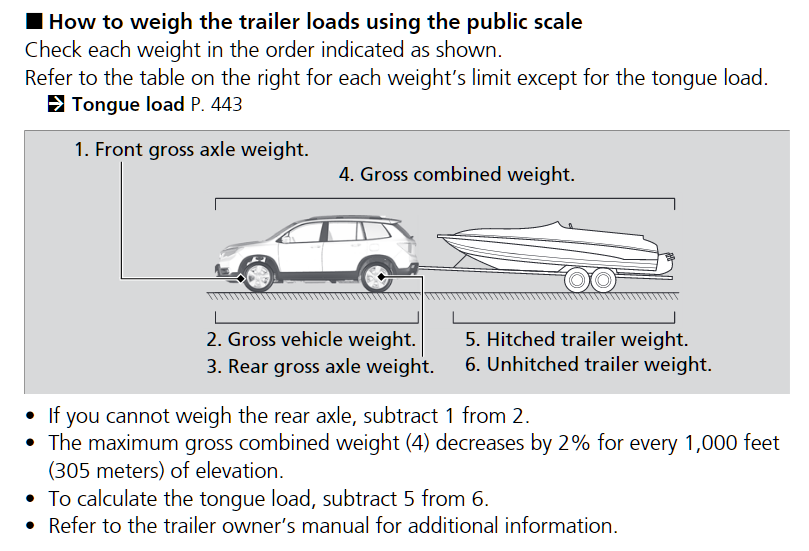 You can also find information on the GCWR in the manuals and it will be in a nice little table like the one listed below. This table is from the 2021 manual and shows two different GCWR metrics towards the bottom of the table and is designated for both 2WD and AWD models.

Notice that the AWD models had a much higher GCWR than the 2WD models, more than 1,700 pounds in fact, so be sure you are looking at the correct ratings for your specific vehicle.

2021 Models: The GVWR and GAWR are not specifically stated in this table and are instead located on the certification label, which can usually be found on the driver's side door jamb (with the door is open). The GCWRs are shown though and are stated as 8,025 pounds for 2WD models and 9,755 pounds for AWD versions. 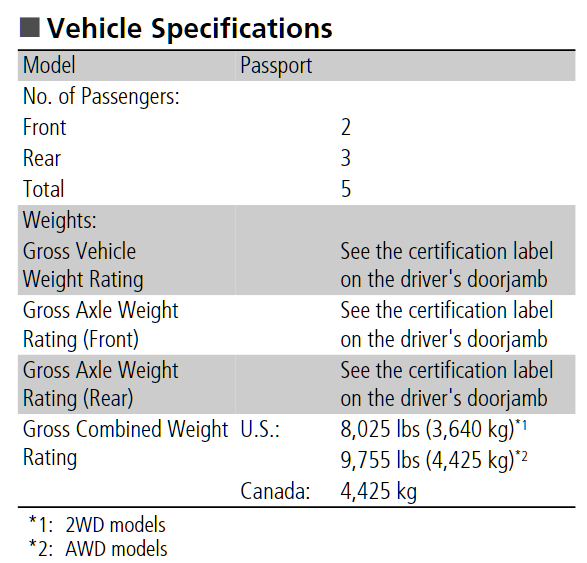 2020 and 2019 Models: For the 2020 and 2019 models, the GAWR, GVWR and the GCWRs are listed and were exactly the same, as far as the maximum weight limit was concerned. I found them in the owner's manuals in the towing section and were listed as a small table. 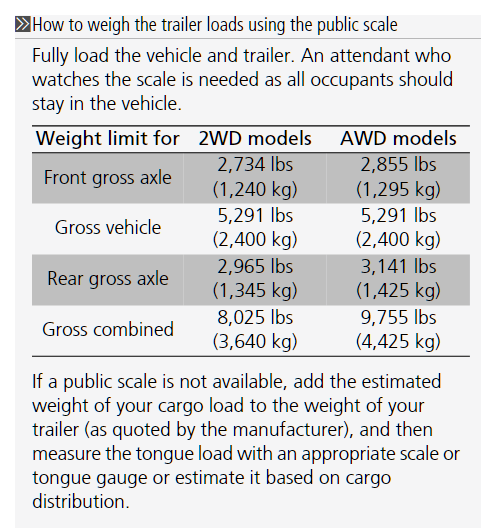 The towing load limit table I took a screenshot of above gives us examples of the maximum trailer weight ratings with different number of passengers in the vehicle.

This is basically a weight assumption and if we look at the notes at the bottom of the table, we can see that each person in the car is assumed to weigh 150 lbs. and have approximately 17 pounds of cargo.

If you or your passengers weigh more than 150 pounds, or you have more cargo than that 17.6 pound assumption, then you need to deduct the difference from the maximum trailer weight rating in the table.

Do I Have An ATF Cooler Installed?

I did a little research to see if I could find out how you could visually tell if you had one installed but was unable to find a definitive answer. The cooler will look like a mini radiator and would end up mounting somewhere close to your radiator (usually on the front side).

So, you have two options at this point. You could take your vehicle in to the dealership and let them verify whether or not you have one installed, or you can try to visually inspect the area around the radiator and transmission for any signs of the ATF cooler.

Below is a snippet I grabbed from the 2020 manual and is the only reference to the ATF cooler I could find, other than the different specs stated in the tow tables I listed above.

Models that were made from 1998-2002 had a pretty simple towing chart (that I have listed below) and there was no range when it came to the overall capacity metrics, there was only one number and that was 4500 lbs. Models that were made in 1997 had their own unique weight ratings, as you can see from the chart below, even though the same engine was used.

The towing capacity didn't range that much for 1997 Passport's but started out on the low end at 3,500 lbs. and went all the way up to 4,500 lbs., if you had the additional equipment installed on the vehicle. So the only real difference to get the increased capacity numbers is really in the hitch you have mounted on your Passport. You will need to use a class 3 (class III) hitch for that higher 4,500 lb. rating instead of a Class 2 (class II) hitch  which will be able to handle the additional weight. As you can see in the chart below, the 1994-1996 Passport had three different capacity numbers based on the engine you had and additional equipment you had installed.

Models equipped with the 2.6 L engine had the lower 2,000 pound capacity and the 3.2L engine had either a 3,500 pound capacity or a 4,500 lb capacity, depending on whether you had the additional equipment installed, referring to that class 3 hitch again instead of the Class 2 hitch. Resources I Used To Gather My Data...

As always, I like to list the resources I gathered my information from and for the Honda Passports I was able to gather all of the towing information from the specific owner's manuals that I found online on Honda's website.

I posted the links to the manuals I found and used for people who may want to look up more information on the load ratings and limitations, which I always recommend. 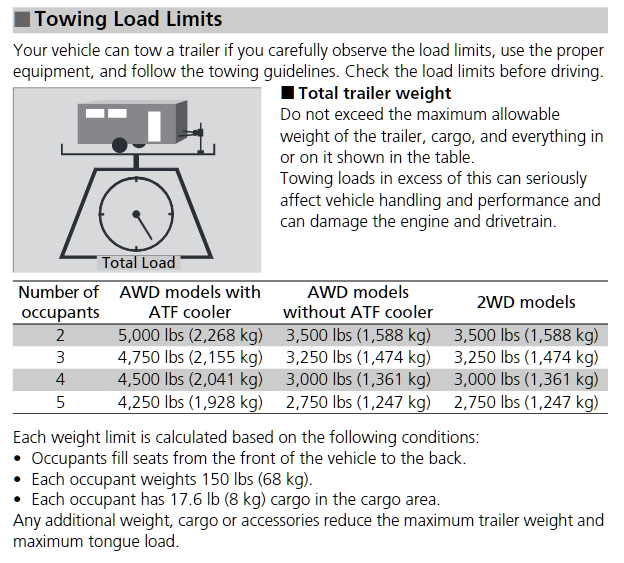 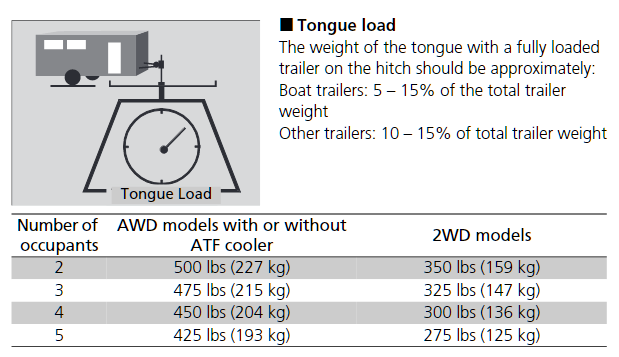 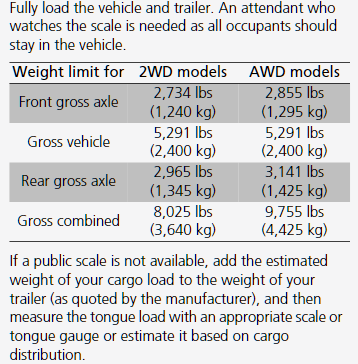 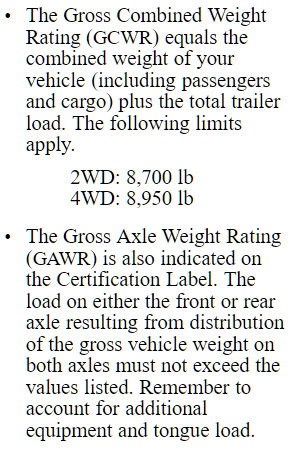 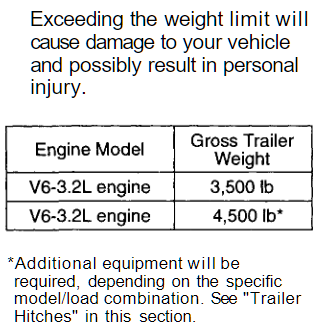 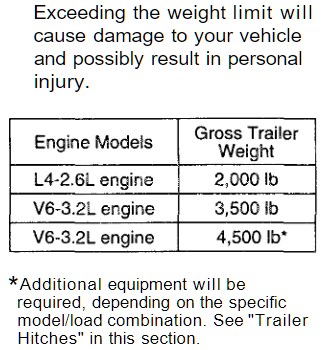