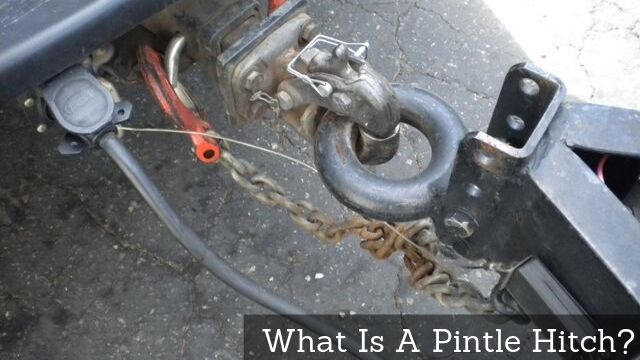 A pintle hitch is a piece of towing hardware, usually in the form of a heavy duty hook and jawed lock, which is attached to the rear of a vehicle. A pintle hitch setup is generally the type of towing setup you use for heavy duty towing where a flexible link pivot is desired.

That is why pintle hitches are particularly useful for towing heavier loads on rough roads, rugged terrain or similar conditions where you need a wider range of motion between the hitch and the coupler.

A pintle hitch is an alternative to the usual tow ball mount, and it has its own advantages compared to the latter. If you need a rugged, heavy duty towing solution with a superior range of motion and a higher towing capacity, you may find a pintle hitch useful for your particular towing needs.

How Does It Work?

The way a pintle hitch works is based on the idea of the pintle and gudgeon joint. Pintles have a wide variety of uses, and you can see them in a wide variety of mechanical applications. At its most basic, a pintle is a stationary pin, made to be thick enough to support a substantial load, which sticks out straight upward. The pintle is made to fit a gudgeon, which is typically a cylinder that allows the whole assembly to rotate along a horizontal axis, while it supports a load.

You will often see pintles used for doors and cabinets. Traditionally, pintles have also been used to build boat rudders as well. They are ideal for applications where a joint needs to turn a great number of times.

You will also see pintles used in swivel casters, furniture with doors, in engine parts and even in a form of aircraft landing gear. In the case of the pintle hitch, the pintle part is usually in the form of a pintle hook, with a slight collar to retain a ring better.

Pintle hitches are used with a lunette ring, which work in combination with the pintle hook. The pintle hitch is the part that is installed on the tow vehicle, while the lunette ring is the component that allows the trailer or another vehicle to be pulled along.

Since the lunette ring has a bit of room to move around the pintle hook, a pintle trailer setup can turn and twist horizontally, vertically, and can even have the trailer at a skew relative to the tow vehicle up to a certain extent. This ability of the pintle hitch and lunette ring combination is particularly useful for towing a load across rough roads, off-road terrain, or even along regular loads that features steep climbs and dips.

Pintle hooks and lunate rings are simple, sturdy pieces of hardware, and together they make for a heavy duty combination that can withstand repeated starts and stops, as well as sustained loads.

This fact, combined with the locking jaw that almost all pintle hitch systems are equipped with, makes for a secure coupling that will not easily come off even on rough road conditions.

This combination of features is the reason why you will usually see pintle hitches used in towing applications that involve off-road routes. Pintle hitch systems are a popular choice for agricultural applications, and they are also used for military purposes too. As you would expect, pintle hitches are also a viable alternative to tow ball systems in industrial applications as well.

Some bumper reinforcement kits also come with their own trailer hitch receivers, so if you have one of those installed, you can install the pintle hook to the trailer receiver itself. Many types of pintle hooks are made to be installed to a mounting plate, so you will need to have a mounting plate with a receiver shank on the other end to be able to use a receiver.

You will usually see pintle hooks that are installed on the bumper as single-piece units bolted in place, base and all. Some pintle hooks will also have a shank – these are called pre-mounted pintle hooks.

Mounting plates have multiple locations for attaching the pintle hook, so you have options available if you need a particular rise or drop distance. They can be very convenient if you are pulling multiple trailers, some of which may differ in height from the tow vehicle you are using.

The locking pin itself may also come with a chain to tie it to the pintle hook and prevent it from getting lost.

Going with a pintle hook does not necessarily mean that you will have to give up your ball couplers. If you have trailers of both types, you may consider getting a pintle hook and ball combination mount. These hitches have a tow ball in place of the pintle, and the hook can accept both lunette rings and ball couplers this way.

What Does A Pintle Hitch Do?

Pintle hitches are also easy to couple and decouple since all that is holding the lunette ring locked in place is the pintle hook jaw, which can easily be opened by removing the locking pin. A pintle hitch gives you an option for pulling heavy loads over off-road routes, so you have a better choice when it comes to agricultural applications.

What Are The Advantages Of A Pintle Hitch?

When it comes to pintle hitches, they are usually compared to regular ball hitches in terms of towing capacity, drivability and ride comfort. The pintle hitch certainly has certain advantages compared to towing systems that use tow ball mounts, but they also come with certain issues.

Another advantage of a pintle hook is the extra articulation you can get using a lunette ring and pintle. A lunette ring usually has plenty of room to move around the pintle, so you get a wider range of motion.

Compared to a tow ball coupler and a ball mount, which has the coupler fitted snugly over the tow ball, the pintle hitch setup can move more freely along more angles. That’s why a pintle hitch trailer is easier to transport along rougher terrain, or even along a regular road with a lot of dips and climbs.

The superior weight capacity and flexibility of pintle hitch setups make them well suited for agricultural as well as military applications. That said, there are a few important reasons why many owners still decide to go with a ball mount hitch.

First, pintle hitch and lunette ball setups are noisy. Since the lunette ring fits loosely over the pintle, it tends to rattle around while you are driving on the road.

Pintle hitches also have that distinctive slam that you can feel every time you stop or accelerate while driving, which can be uncomfortable for your passengers as well. Of course, the noise and the rough ride makes a pintle hitch setup unsuitable for transporting a trailer with passengers, as well.

The other important reason why pintle hitches are not usually used for towing larger campers, despite the higher gross trailer weight and tongue weight ratings they come with.

Larger campers and trailers are much easier to drive around, and safer to handle with a weight distribution system and sway control features. For those reasons, you may need to consider a tow ball setup instead of a tow hook. You may also look into the option of using a combination pintle and ball setup as well.

What Pintle Hitch Do I Need?

The type of pintle hitch you need depends on the load you plan to pull, or more specifically, the coupling system and tow bar hitch you need to work with.

If you have a tow bar hitch receiver, then you can use a pre-mounted pintle hitch with its own receiver shank, or you can go for a pintle hitch and mounting plate combo. You can also directly mount a pintle hook to a suitable pintle mount, or to a reinforced bumper on the tow vehicle.

For trailers that use lunette rings, you will need a pintle hook type that the ring can fit over. On the other hand, if you have trailers that use ball couplers, you can go with a hook and ball combination to accommodate both types with one setup.