I was looking around at some of the different Buick vehicles out there and came across the Encore and noticed that a lot of people out there were wondering what the towing capacity was for these smaller SUVs. This post covers exactly that!

The 2020 and 2021 Encore Gx's had the exact same tow chart, so I only listed one but it applies to both model years.

Two Versions Of This SUV: It is important to note that when doing my research, I found that there were two different versions of this vehicle: the standard version and the GX version. The GX version was only released as recently as 2020, but the standard models were released in 2013 and are still being produced, along side the GX versions.

Be sure you are looking at the correct model but to sum up the information, the GX models had a tow rating and the standard models did not have any tow capabilities at all.

The 2020 Encore GX did have a small towing capacity of up to 1,000 pounds, as you can see from the chart below.

The same 1,000 pound maximum trailer weight rating was true no matter what engine you had equipped with the GX. I looked through all of the Encore's owner's manuals from 2013-2021 and they all stated that the Encore did not have the capacity to tow a vehicle.

The image below shows what the exact wording was and this was found in all of the Encore's owner's manuals from 2013-2021, which makes sense because it is a smaller SUV.

I did leave links to the owner's manuals below, in case you wanted to see for yourself, as I am sure there are some of you out there that will be in disbelief, like I was. I was expecting a smaller maximum capacity of around 1,000 pounds or so but that was not the case. There were two different engine options for the 2020 and 2021 model years, the 1.3L and the 1.2L. Now, it didn't matter which engine you had equipped in your vehicle, as it didn't affect the capacity numbers at all, they were the same for both engines, in fact.

I still think it is important to know what engine you have and wanted to give a quick overview of how you would go about finding that out. There was no clear answer I could find that stated where you could look to distinguish whether a specific model was using the 1.2L or 1.3L engine so I came up with an easy workaround.

Locate Your VIN: The first thing you need to do is grab your VIN. This can be found on your current (or past) DMV registration cards, on the dashboard of the vehicle (driver's side) or on the certification label that is usually located somewhere along the driver's side door jamb.

After you have your VIN, you will need to use an online VIN decoder like the one I am using for this example. Just plug in your VIN in the search bar area and then hit the search icon.

After a few seconds, the website will bring up all kinds of results that has a ton of information about your vehicle. For this example, the VIN I grabbed uses a 1.4L engine, which tells me that we have the base Encore (not the GX model) and this specific model is not recommended for towing.

Here is a quick list for the owner's manuals I used to gather the tow information on the Encore's. I could not find the owner's manual for the 2014 model on GM's website where I found the other manuals but I will post it once I find it. 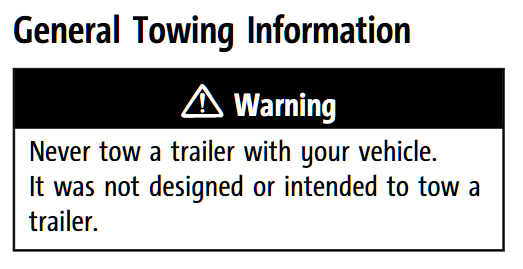