The Audi Q3 is a compact SUV that didn't have a whole lot of towing capacity attached to it, but it did in fact still have some pulling power, allowing it to haul lighter loads. I gathered the data for the Q3's from the owner's manuals I found on Audi's website, looked through all of the data and sorted/grouped that data into an easy-to-read format. I hope it helps!

Overview of the Data For the Audi Q3:

Engine Choices: Out of all of the trailer weight charts I found, no engine specs were mentioned, which usually just means that the engine equipped did not affect the numbers and/or the same engine was used, which in the Q3's case was true, for most model years.

The 2.0L engine was used almost exclusively on all of the Q3 models.

Towing Capacity: The overall maximum trailer weight capacity for the Q3's I found from 2015-2020 were relatively low and were set at 1,500, 1,650 and 2,200 pounds respectively, according to the charts I found in the owner's manuals.

The Q3's in 2019 and 2020 did have a "permitted trailer weight" of 6,022 pounds but I was not able to find out what that exactly means and didn't want to include it into the tow numbers yet until I understand what it means.

The Q3's will list a maximum grade that you can drive up (12%) while towing and this reflects an "extreme condition" when pulling anything with your vehicle, just like hot weather affects the cooling system.

The permitted trailer weight of 6,022 pounds was another metric that was the confusing part for me.

The max tongue weight was set at 154 pounds though, which is the "industry standard" as far as percentages go and falls within that 10-15% mark. With the tongue weight set at 154 pounds, I do not see how the capacity could be larger than this and if we compared these metrics to earlier models of Q3's, the max limit for those were 2,200 pounds, so it is confusing.

I will research this more and post my findings once I have gathered the information to keep this up to date and as accurate as possible.

The 2015-2018 models had a clearly marked towing capacity of between 1,650 pounds for an unbraked trailer and 2,200 pounds for a trailer that had trailer brakes installed.

The maximum tongue limit was set at roughly 10% of the maximum trailer weight, which was 220 pounds.

As with Audi's Q5 and Q7 capacities, these figures for the Q3's were good for up to a 12% incline.

Resources For The Audi Q3:

Audi does have an online resource for the Q3's owner's manuals, where I obtained all of the information in this post but I could not link to them individually like I wanted too because they are time sensitive documents and they expire.

If you want to look up your Q3's owner's manual you will have to go to Audi's website and enter your VIN number, select the owner's manual and search for trailer weight in the search bar to find your specified weight limits.

How To Look Up The Q3's Owner Manuals Yourself...

Step 1: The first step is to visit Audi's website and enter your VIN into the search bar that is shown and click the submit button.

Step 2: It will take you to a page that looks similar to this and the text "owners manual" is a clickable link to the pdf version of the manual. For some model years there will be more than one option on this page so be sure you click on the link that states it is the owner's manual. Step 3: The manual will take a few seconds to completely load and then you will want to use the search bar in the upper right-hand corner of your screen and type in trailer weight into the search bar.

I have found that this is the easiest phrase to locate the tow charts/specs. Below the search bar are clickable links that take you to specific pages, and you may have to click on a couple before you find the weight rating specs.

Step 4: For the 2020 Q3, the towing chart looks like this (outlined red area) and will have the maximum permitted trailer weight limits listed. Some model years will not have a chart but instead, the information will be shown in a paragragh type of format, which can be harder to locate but it is there! 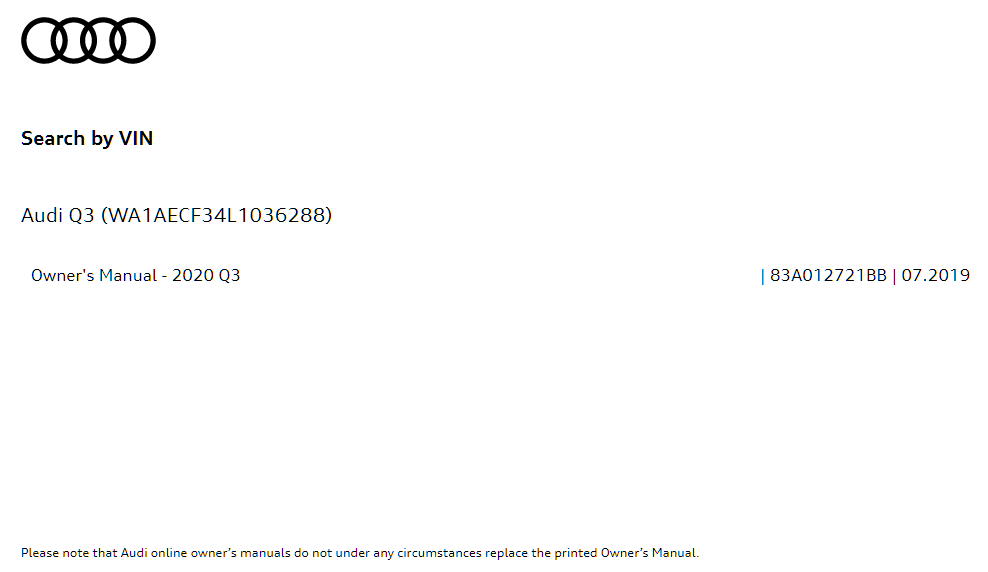 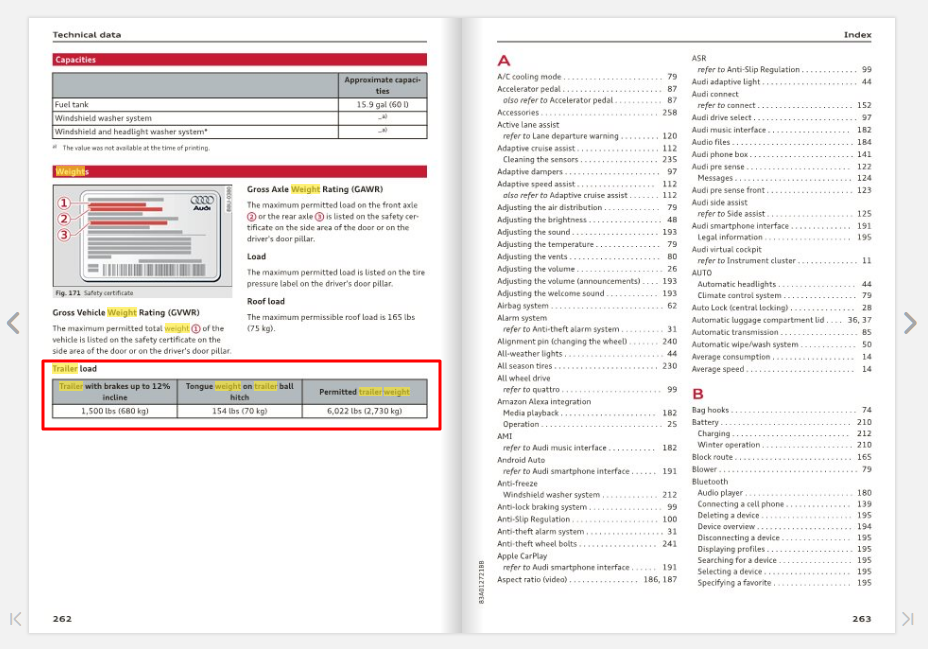