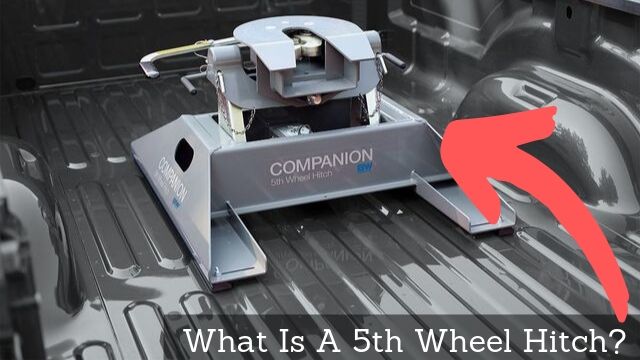 A fifth wheel hitch is part of a towing system designed for medium to heavy duty towing, and it improves on the classic towing bar design by carrying the load of the trailer near or right over the rear axle of the truck.

The 5th wheel hitch is a popular system of choice for towing larger campers and semi-trailers with trucks, and it’s the recommended setup for any sort of heavy duty recreational use for a variety of reasons.

If you’ve spent any time on the road then chances are, you are already familiar with trailer trucks and the multi-ton trailer loads that they pull along.

You might immediately notice that just about any sort of big rig truck, from smaller moving vans to heavy duty trailer dump trucks, cargo trucks and trailer trucks all use a system where the trailer is linked up to hardware that is mounted over a rear axle of the towing vehicle. A fifth wheel hitch works very much the same way.

Bumper towing systems, such as your regular ball hitch, pintle hook or gooseneck bars, are capable of pulling heavy loads, as long as it’s a load that can fully support itself on the road. For flat-towing vehicles and full trailers, a bumper tow hitch certainly does the job – up to a certain extent.

Even the heaviest of bumper tow bars can only take so much weight, and when you start to go to the multi-ton range, then you will need a more robust solution. That’s the reason why you will not see big rig trucks using oversized ball hitches since a bumper tow arrangement can only get you so far.

The forces that a multi-ton load exerts on a tow ball mount or a tow bar hitch can snap off the consumer grade bolts used in most kits. And when you start getting into heavier semi-trailers, you also start running into issues with tow ball weight – that is, the downward weight exerted by the trailer on the tow ball of a typical tow bar hitch setup. In these cases, getting the rear axle of your truck more directly involved with the load-bearing is simply a stronger setup.

As a general rule, a fifth wheel setup or a gooseneck hitch system can carry around 20 to 25 percent of the load weight. In contrast, tow bar hitch systems and similar types of bumper hitch setups can only safely carry 10 to 15 percent of the hitch load.

If you have a heavy duty towing vehicle, such as a large pickup, tractor, or a half ton truck, then choosing to go with a fifth wheel hitch is a decision that can maximize the towing power you have at your disposal. A fifth wheel hitch, being a heavy duty system, will let you carry much heavier loads than what you can manage with a tow bar hitch setup.

Fifth wheel hitches are actually similar to a very old system used on four wheel carriages and wagons, back when horse drawn loads were still the norm. The first of these hitches used an actual fifth wheel, a smaller one of course, along with half of a front axle to provide a pivoting link between a wagon and a semi-trailer.

Since wagons and carriages had four wheels, the coupling mechanism came to be known as a fifth wheel, and the ease of coupling and decoupling using this system has proven popular – the hitch has since been adapted for motor vehicles as time passed.

Today’s fifth wheel hitch systems retain the same characteristic that made them popular with the transport industry decades ago – the ease with which you can couple and decouple a trailer.

Fifth wheel hitches are usually used with trucks and pickup-type vehicles. They are also used on tractors, and fifth wheel setups are also used for linking trailers together to set up trailer trains.

A Word On Cost:

Just like most bumper trailer setups, fifth wheel hitch kits come in a wide variety of models and prices. You can get a fifth wheel hitch for light duty towing and it may send you back around $500 to get everything set up. A quality heavy duty model, especially those designed to go on top-of-the-line trucks, can cost you $2,000 or more.

Installing a fifth wheel hitch can be as simple as bolting the hitch rails, brackets and frame to the vehicle frame, a process that you may be able to do on your own in the garage or the driveway. You may be fortunate enough that a fifth wheel hitch kit is available that is specifically fitted for your particular truck model, in which case you may be able to install it yourself using basic tools.

If you have to adapt a fifth wheel hitch kit for your vehicle, or if you need to make some modification to your truck in order to install the hitch, then you may need to consider hiring a certified mechanic to do the installation for you.

A fifth wheel tow setup is made up of two parts: the fifth wheel hitch and the trailer coupling system. When we talk about a fifth wheel hitch, we are referring to the part that is installed on the towing vehicle, which usually goes on to the flatbed of a pickup truck.

The fifth wheel hitch itself is made up of a large solid plate shaped similar to a horseshoe or a half donut. This thick place is lifted off and supported by a heavy duty frame, and this frame is in turn attached to multiple rails. The whole assembly is securely attached installed, via the frames, directly to the frame of the pickup truck. Some kits are even permanently welded to the truck frame for even more strength.

The frame and rails of the fifth wheel hitch, on the other hand, will evenly spread out the lateral forces exerted by the trailer along the frame and the cab of the truck – again enabling this hitch system to pull much heavier weights compared to bumper tow setups.

The rest of the trailer weight bearing down on the fifth wheel hitch plate is borne by a flat plate around the king pin. This plate rests on the hitch plate, and helps to distribute the downward weight of the trailer along a wider surface area.

The trailer coupling plate and the king pin should have adequate lubrication, to allow the fifth wheel hitch to turn and decouple easily. The lubrication also significantly cuts down on the noise that the hitch can make while on the road.

What is the Difference Between a 5th Wheel Hitch and a Gooseneck Hitch?

While both hitches use a bracket that is mounted over the rear axle of the truck, a gooseneck and a fifth wheel hitch are designed for different uses. A gooseneck hitch is a simpler setup, with a gooseneck tow ball installed or welded right into the hitch frame itself. In comparison, the fifth wheel hitch is a more complicated setup with pin locks and release mechanisms, plates, and sliders in some cases.

A gooseneck hitch setup is ideal for heavy duty commercial or industrial towing. They can carry a bit more than fifth wheel hitch kits, and they are usually rated up to 30,000 pounds or more. They are usually used for transporting vehicles, livestock, cargo and materials.

A fifth wheel hitch system, on the other hand, offers a much smoother ride. Many regions have regulations that do not allow you to carry passengers on a trailer unless it is linked to a truck using a fifth wheel hitch.

This system will also help ensure the safety of more fragile cargo by helping to dampen road shocks and vibrations. Typical fifth wheel systems may top out at 25,000 pounds, but they also perform much smoother when it comes to recreational towing uses.

What Is A Side Mount 5th Wheel Hitch?

A side mount fifth wheel hitch refers to the mounting system of some kits, where the brackets are securely mounted to the sides of the truck frame components. They are convenient for installing the fifth wheel hitch on to the frame using the existing holes, without the need for drilling extra mounting holes other than the factory ones.

What Is A Slider 5th Wheel Hitch?

The slider fifth wheel hitch solves one of the common issues with setups where the head of the trailer overlaps the rear bed of the truck, which can result in clearance issues when the vehicle is at an angle with the semi-trailer. In low speed tight turns, the trailer can get in the way of the truck cabin when the driver attempts to take the vehicle at a very sharp angle, such as for making a jack knife turn.

A sliding fifth wheel hitch allows the driver to unlock the slide and shift the fifth wheel jaws, along with the king pin, forwards or backwards along the length of the truck bed. This lets the driver decrease the turning radius of the trailer setup temporarily, until the maneuver is carried out.

Once the vehicle and trailer is in the right direction, the sliding hitch can be re-set so that the load Is once again directly over the rear wheel axle, then the hitch can be locked in place for added safety.

If you don’t have a slider fifth wheel hitch and you find yourself running into clearance issues with your trailer, you can also opt to fix this by doing something about the pin box on the semi-trailer itself. Most semi-trailers designed for fifth wheel towing will have the pin box under the body of the trailer.

If your setup and load weight allows for it, you can get an extension adapter for your pin box that extends the pin box forward and out of the body of the trailer – effectively moving it backwards for a foot or more. This can be enough to enable you to do a 90-degree turn, or close to it at least.