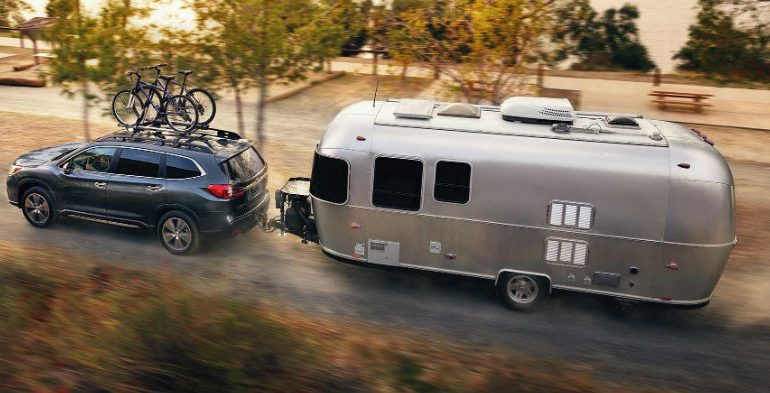 The Subaru Ascent is a newer model in the SUV lineup and I noticed that people are starting to ask what the towing capacity for these new sleek vehicles are.

I did notice a range of numbers when doing my research from various online sources and found that to not really be the true weight ratings for the Ascents. I broke down what you can expect to pull from one of these SUVs and what factors determined the overall weight capacities.

Overview of the Data For the Ascent:

Engine Choices: The engine choices for the Ascent were not a determining factor when it came to maximum weight rating numbers, in fact, I think that there was only one engine option for these vehicles, which was the 2.4L (4 cylinder) engine.

Transmission Configurations: There were two different types of transmission options that came with the Ascents and this was the determining factor between the lower and higher capacity ratings.

Basically, what it came down to was the fact that one transmission had a transmission cooler and the other transmission did not. Your vehicle "model number" would specify if you had this equipped or not (more details below).

Towing Capacity: The maximum trailer weight ratings for the 2019 and 2020 Subaru Ascent was either 2,000 lbs. or 5,000 lbs. and didn't have any other options between those two numbers, so it was not a range but "either or".

The 2019 and 2020 model's overall towing numbers were identical and nothing changed as far as the overall capacities.

The towing capacity for the 2019 and 2020 Subaru Ascent was either1,000 lbs., 2,000 lbs. or 5,000 lbs. (maximum), and the reason for the huge difference was due to the "air-cooled continuously variable transmission fluid cooler" that is offered on some of the models. There was also a huge gap in the ratings when you compare unbraked trailers to ones that use a braking system. This created a larger range in the weight limits because of this and was specified at between 1,000-5,000 pounds.

Do I Have A Transmission Fluid Cooler Installed?

As I pointed out, models that had the transmission cooler option equipped saw the largest capacity numbers in the tables, so naturally people will check to see if they have one installed on their vehicle.

Finding out if you actually have one installed however, is a bit more difficult to determine by most people. This is why I recommend you taking it in to the dealer to see if they can verify it's presence for you, this is by-far the best way to go about it.

I was able to find a couple of other clues though that may indicate whether or not you have one installed on your vehicle. The first clue I discovered was the fluid capacity amounts for models that had the cooler installed and ones that didn't, as indicated by the image below.

The models that did have the cooler installed had a fluid capacity of 12.7 quarts (12L) and the models without the cooler had a slightly lower spec of 12.3 quarts (11.6L). Now this is not a huge difference and may be overlooked by most people, especially when it comes to variations in the fluid levels when your vehicle is cold, warmed up and hot.

The second clue I found was in the same image but if we focus in on the notes below the table (image below), we can see that model numbers are specified for vehicles that have the coolers installed. If the first six digits of your model number starts with "TR690S" or "TR690G" then you will have the cooler equipped, from what I understand.

Where Do I Find The Model Number Code?

The transmission code for the Ascent's will be determined by the "model number" which can be found on the lower left-hand side of the door jamb of the passengers' side door, when the door is opened.

The TR690SXXXX and TR690GXXXX are the two different model number examples and really the 6th digit seems to be the determining variable. So the "S" or the "G" will dictate which type of transmission you have equipped in your Ascent. I wanted to include links to the owners manuals, so anyone can have them as a resource if they want to check the specs for themselves or want to look something else up and thought it might come in handy.

I found a short video on YouTube that states some of the specs on the Subaru Ascent and shows a test course with a 4,300 pound Airstream trailer attached, with some insight on how the Ascent tows, explanation on some of the additional features, etc. 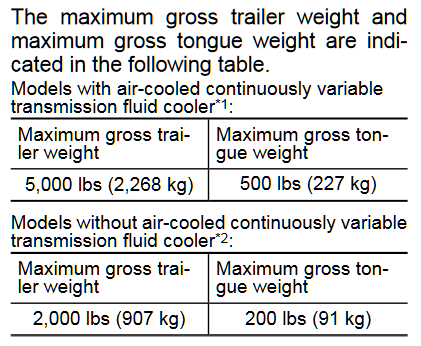