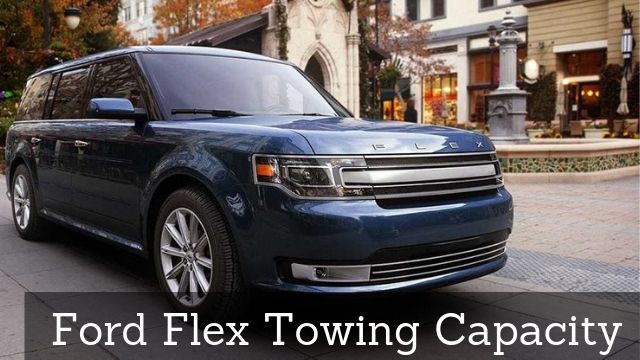 The Ford Flex is somewhat of a newer type of Crossover SUV but actually has a decent towing capacity, mainly due to the V6 engine that powers it. I wanted to write this short article that breaks down the pulling power of the Ford Flex throughout the years to give people an easy-to-read resource.

Overview of the Data For the Flex:

Towing Capacity: For the most part, the Flex has a standard capacity of 4,500 lbs. from 2012-2019, but you will likely need a class III tow package to achieve those capacities and/or a weight distributing hitch too.

The capacity numbers from 2009-2011 was a little bit different and ranged from 2,000 lbs.-4,500 lbs. There was no engine specified for these years, instead a light-duty and heavy-duty model was available and is the reason for the large gap in weight rating numbers for the Ford Flex's made during these two years.

Engines Used: There were really only two different engine options and they both had the same displacement, the only difference was that one engine used Ford's EcoBoost engine instead. The engine choices offered for the Ford Flex was the 3.5L V6 and the 3.5L EcoBoost V6.

Axle Configurations: Again, this was a simple choice, as the only two options were either FWD or AWD. The 3.5L EcoBoost engine seemed to only be available with the AWD axle, whereas the standard 3.5L engine had the option of either FWD or AWD from 2012-2019.

The towing capacity for the 2016-2019 Ford Flex was listed right at 4,500 lbs. but will require a class III tow package, no matter which engine or axle you have.

If you have the 3.5L engine (non EcoBoost), then you will also need a weight distributing hitch to achieve that higher weight rating. The 2014-2015 models were a little bit different than the newer models and only seemed to require the class III tow package to be installed to achieve that maximum 4,500 lb. towing capacity.

Nothing was mentioned about a weight distributing hitch for models that were made for these two years.

The towing capacity for the 2012-2013 Flex was still 4,500 lbs. but that seems to be the standard metric, no matter the engine or axle configuration.

This seemed to be more of a standard weight rating for these vehicles and did not require any type of additional equipment or options to achieve the stated weight rating. The 2009-2011 models had a little bit different metric and didn't specify the engine used but instead had a light-duty or heavy-duty model listed.

The towing capacities for the 2009-2011 models also was a bit different, ranging from 2,000 lbs.-4,500 lbs. The use of a weight distributing hitch was also specified for the 2011 models but not for any other years.

What Tow Options Were Available?

Even though the Flex didn't have much in the way of options when it came to tow accessories or packages, you can find out what was offered by looking in Ford's towing guides.

Here is a screenshot I took of the 2019 brochure that has the available options highlighted with the red border. You can see that for the 2019 models, a wiring harness and 7/4 pin connector were offered, along with a hitch receiver, sway control feature and an engine oil cooler for select models.

You can find this table in all of Ford's guides for your specific model year and it will contain the options that were available. You will need to refer to a couple of the weight rating specs in order to get accurate calculations for your vehicle weight, trailer weight and a combination of the two to make sure you're within the manufacturer's specified weight limitations.

These terms are usually referred to as the GVWR, GCWR and GAWR. We can find gross vehicle weight rating axle weight ratings in one place, which is located at the bottom corner of your door jamb, if you open the driver's door.

This sticker will have the gross vehicle weight rating listed, as well as both the front and rear gross axle weight ratings listed. You can also find your VIN on the sticker. I was able to find the GCWR specs listed in the charts that I found inside the owner's manual, which I recommend you reading anyways because there is a lot of very useful information in there, like the GCWR numbers.

Resources For The Ford Flex That Helped Me:

Here is a list of links to Ford's towing guides that I used to gather and compile all of the information on the Ford Flex. Feel free to have a look through them yourself, if you need to.

I wanted to also point out that you can find the charts in the owner's manual. They do not look anything like the charts I have posted here that I pulled from Ford's tow guides, but they have the same information that is listed in a little bit different format than what I have listed on this article. I attached a screenshot of what the 2015 chart looks like from the owner's manual. The chart in the 2015 owners manual where is the engine that was available, which in this case happens to be the 3.5L engine and next to those columns, you can find the gross combined weight rating and the maximum trailer weight ratings on the far right side of the table.

Another interesting thing to note about this specific part is that there are actually two different ratings listed in the table, a 2000 pound rating and a 4,500 pound rating.

If you look at the far left column you can see that the 2,000 pound rating specs (top three rows) are only for models that have a Class I hitch, instead of a class III hitch installed and that is basically the only reason you have those two different capacity ratings.