In this article I go into detail about the tow specs of the 2019 F150s, what the average capacity numbers are for each engine, have screenshots of the tow charts and so much more. I hope you find this article helpful and if so please share it if you know someone who might find it interesting! Thanks!

I tried to include as much information as I could for the 2019 F150s, but I insist that you read the owner's manual for all of Ford's recommended towing information.

3.0L Diesel (V6): The 3.0L diesel engine was the runner-up, as far as overall towing capacity number go for these model year trucks, next to the EcoBoost engine. The diesel engine boasted a whopping 7,200-11,300 lb. maximum trailer weight rating in the charts though, which isn't shabby for a smaller 3.0L engine.

Assumed Weight: It is important to know what weight assumptions Ford uses when stating their tow numbers in their charts. For 2019 model years, they assume two people in the vehicle that weigh 150 lbs. each or a combined total of 300 lbs. with no cargo and all mandatory towing equipment installed.

Here are the towing charts for the 2019 Ford F-150's. There are two different charts in total, one for conventional towing and the other for 5th wheel towing. The specs are very similar, in most cases with slight differences in some of the capacities, overall.

I listed the conventional tow charts first, seeing as how it is usually the most common method of towing, followed by the 5th wheel charts. 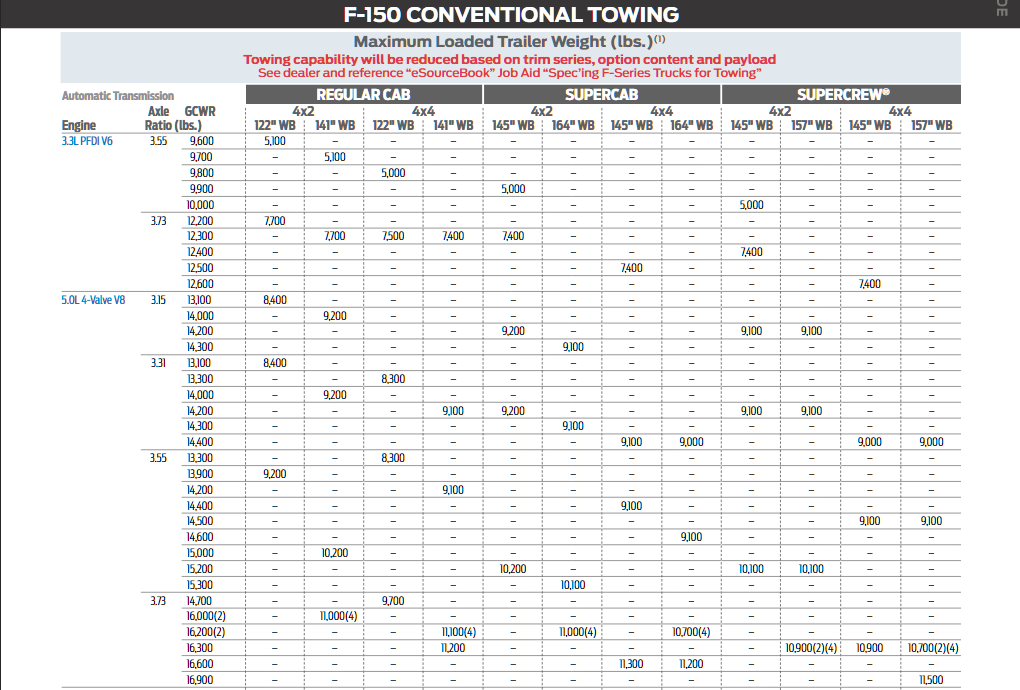 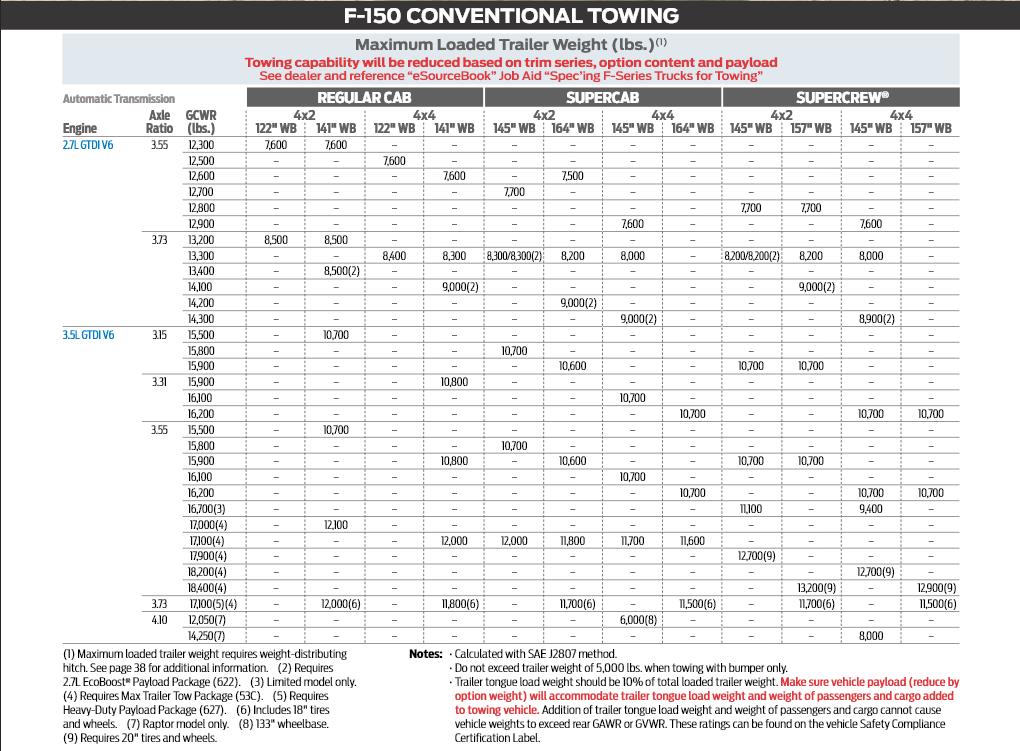 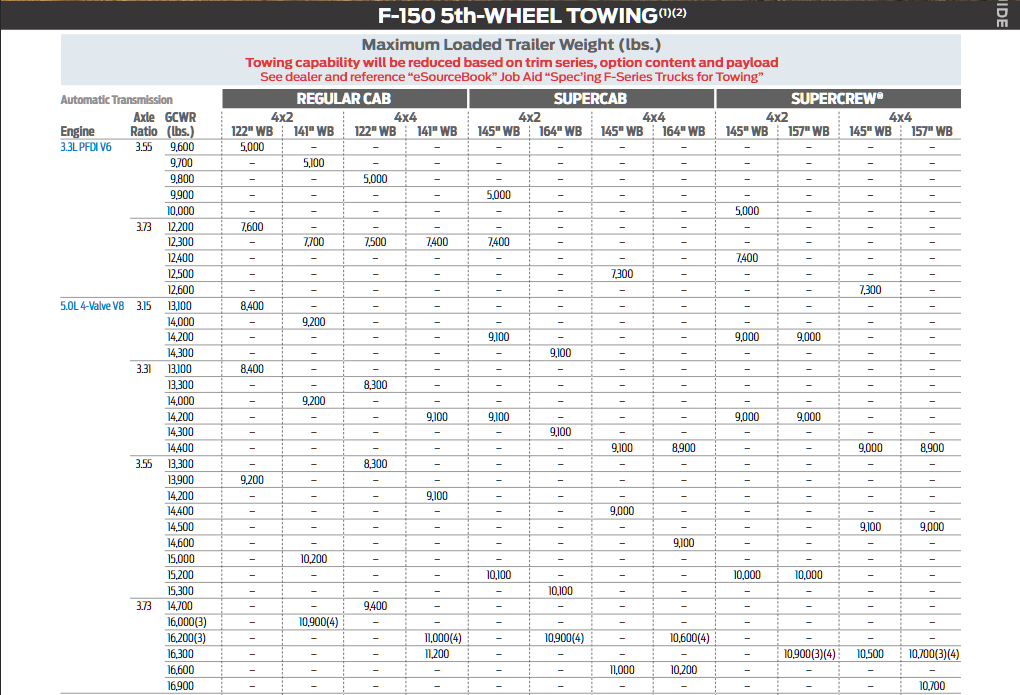 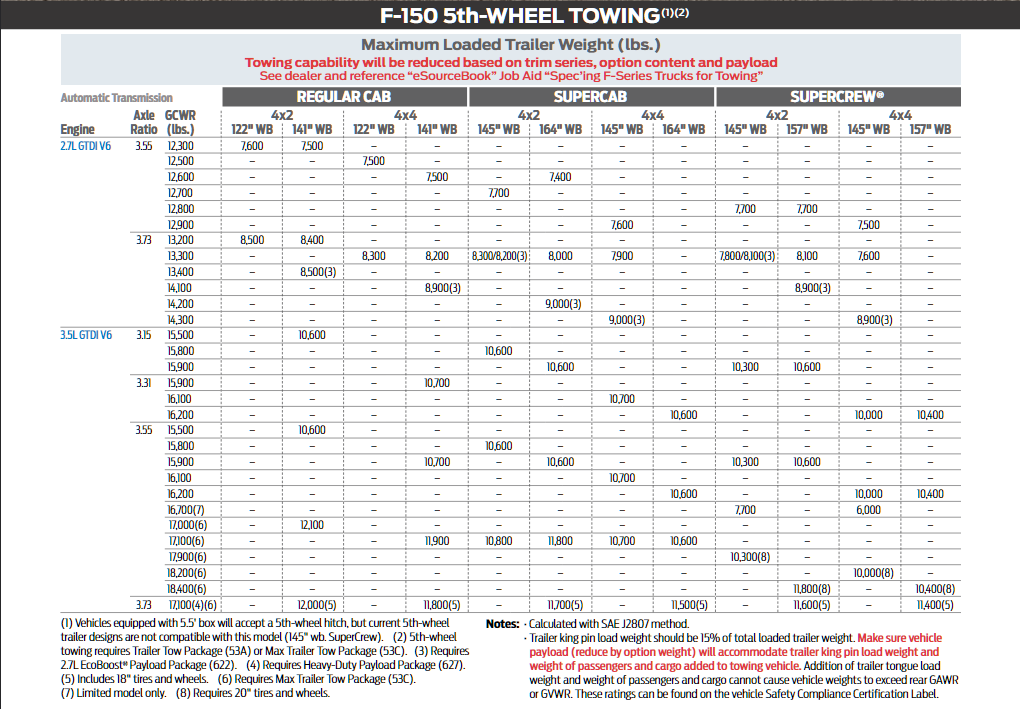 If you look at the 2019 F-150 tow charts, you will see tons of information that can be quite confusing to some people, especially if you have never seen a towing chart in your life! I want to break down some of the main elements in the charts for those of you out there that feel a little overwhelmed.

The charts I use in the below examples are not for the 2019 F150s, they are for another model year and are used just as an example of how to read the charts. Refer to the charts above for accurate tow specs.

Cab Configurations: The first thing you will probably see on the 2019 charts is the cab styles (cab configurations) at the top of the table. I circled the three different names that Ford refers to and outlined the three main columns in the example image below.

4WD vs 2WD: Right below the cab style columns, you will see two separate columns that specifies the capacity numbers for 2WD and 4WD models. These are outlined in a red box 2WD) and a blue box (4WD) in the example image below.

Engine Equipped: One of the most important elements that you need to plug into the tables is the engine that you have equipped. These are listed in the tables on the far left side and make up large rows that are outlined in the example image via a red and orange box.

Later in this article, I talk about how to find out what engine you have equipped in your truck, so if you need to know how to figure that out then scroll down a little further.

Axle Ratio: Finally, we get to axle ratios and these will be slightly to the right of the engine label. Each engine will have at least two different axle ratios listed, so be sure you are looking in the correct row for your specific axle ratio.

Knowing what axle ratio you have in your 2019 Ford truck is an essential piece of information that you need to plug into the towing charts, in order to get an accurate tow rating number but finding it is not obvious to some people.

All you have to do to find out what your axle ratio is for your 2019 F-150 is to open the driver's side door and located the label that is located on the door jamb that looks similar to the one shown in the image below.

At the bottom of this label, you will see an area labeled "AXLE" and under that you will see two digits. These can be numbers or a letter and a number, depending on the type of axle you have.

The tow packages and options that are available for the 2019 F150s were specified in the towing charts but this chart that I grabbed from the spec sheet (link below) lists all of the optional tow packages that were available, as well as the standard equipment that came equipped. 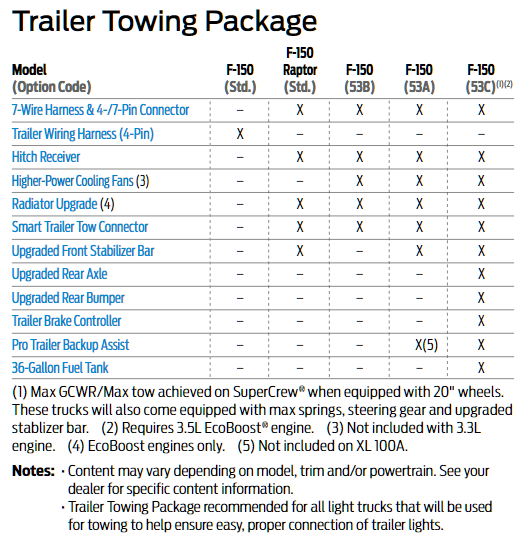 You will need to know what engine you have equipped in your 2019 truck when plugging in the different variables in the tow tables and for some people finding out what they have installed is easy but some of you out there may need a little help...

In order to find out what engine you have, you need to grab your VIN which is usually easiest to find on either your registration card or on your dash on the driver's side (if you're on the outside looking in).

Once you have your VIN, you will then need to plug it into a decoder to break down all of the information located within the VIN itself. This is easy to do online and there are many different sites out there that do this, but I prefer to use this one myself.

Just plug you VIN into the search bar and then click on the magnifying glass or press the enter button on your keyboard. This will bring up many different areas of interest for your specific F-150 but to find the engine specs, you will need to scroll down a little and find the "Engine Model" column and to the right of that will be your factory installed engine and in the case of the example image, it is the 3.5L EcoBoost engine that is installed.

I wanted to post an image with the three different cab configurations that are offered by Ford and many other manufacturer's these days and what each cab style is labeled. Since this is more of a generic "one size fits all" image, you can find Ford's cab styles in the third row, which is the regular cab, the super cab and the crew cab.

There is a ton of other information that can be found regarding towing in the owner's manual and the spec sheet that I have links to below.

The images I have posted here are just some of the additional information I found for the 2019 F-150's, which mainly consist of weight rating limitations for hitches and vehicle specific limits without optional tow packages or equipment installed. 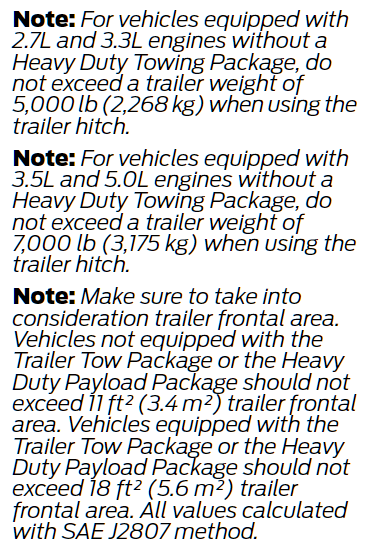 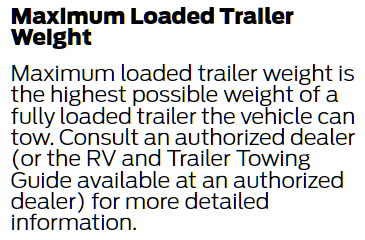 I wanted to include links to the different resources I used to gather all of my tow related info for the 2019 F150s for those of you out there that might want to dive deeper into the stats. Feel free to browse through the owner's manual, the 2019 towing guide and the spec sheet for the 2019 F-150.