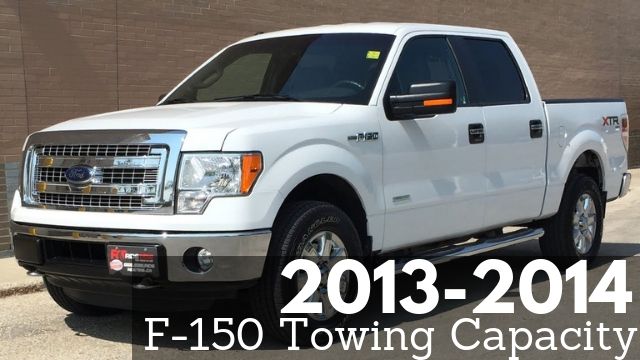 The 2014 Ford F-150 came equipped with four different engine options and five different axle ratios that made the towing specs somewhat confusing to some people.

I wanted to simplify that information and make an easier to read and digest article that CLEARLY explains whet the towing capacities are for the different 2014 F-150s. Here we go!

There were anywhere from 2-4 different axle ratios that could have come with each engine, so keep that in mind and will become more clear as we get into some of the towing specs.

The Below chart basically shows the different engine configurations maximum towing capacity for the 2014 F-150s and is more of a quick reference type of table, for convenience. We will get into the specifics a little farther down the page.

It is important to note that a 2014 F-150 that has a specific gear ratio can have a pretty big difference in towing capacity and is why the GCWR is directly tied to gear ratios and will allow for a higher tow rating.

The same truck with a GCWR of 16,900 lbs can have a maximum towing capacity of 11,300 lbs. because of the higher GCWR. To achieve this higher towing rating though, a payload and/or towing package might have to be added to the truck as well.

The axle ratio is easy to find on a 2014 Ford F-150, if you know where to look! If you open the driver’s side door, you will see a sticker with a lot of information on it somewhere along the in side door jamb.

At the bottom of the sticker, you will see an area that states “AXLE” with a series of numbers or letters and numbers below it. This is the key to finding out which axle you have.

There weren’t really any huge differences in towing capacities when it came to 2WD vs 4WD. The differences were usually around 200-300 lbs., for the most part when comparing the same engine, the same gear ratios and the same GCWR.

Tow Packages That Were Offered:

Not all of the trucks had the option to have upgraded towing packages installed but there are three main packages that you could have chosen from and these are: the heavy duty payload package, the trailer tow package and the max. trailer package.